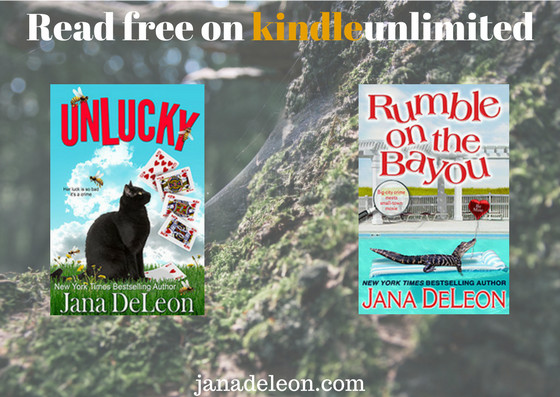 Jana DeLeon has two complete standalones available #FREE on kindleunlimited
>>> Unlucky - http://amzn.to/2r4Z7vN
Mallory Devereaux is known throughout the town of Royal Flush, Louisiana as a walking disaster and her luck just got worse. She needs to raise ten-thousand dollars in one week to keep the IRS from seizing her adopted father’s business where she works as the demolition foreman.
When the opportunity to cool cards at her uncle’s casino comes up, Mallory hopes her luck is changing. But when she realizes her uncle has assembled a tournament of criminals, she wonders what she’s stepped in the middle of.
>>> Rumble on the Bayou - http://amzn.to/2pKaFk5
Deputy Dorie Berenger knew the day would go from bad to worse when she found a stoned alligator in the town drunk’s swimming pool. Then DEA agent Richard Starke shows up in Gator Bait, Louisiana, giving out orders and insults faster than you can cast a fishing line.
Dorie knows the residents of Gator Bait aren’t going to talk to a stranger, especially a Yankee, but she stuck with Richard until he catches his bad guy. With no other alternative to restore peace to the small town, Dorie agrees to help Richard catch a criminal and in the process, uncovers decades of secrets that have been hiding deep in the Louisiana bayou. 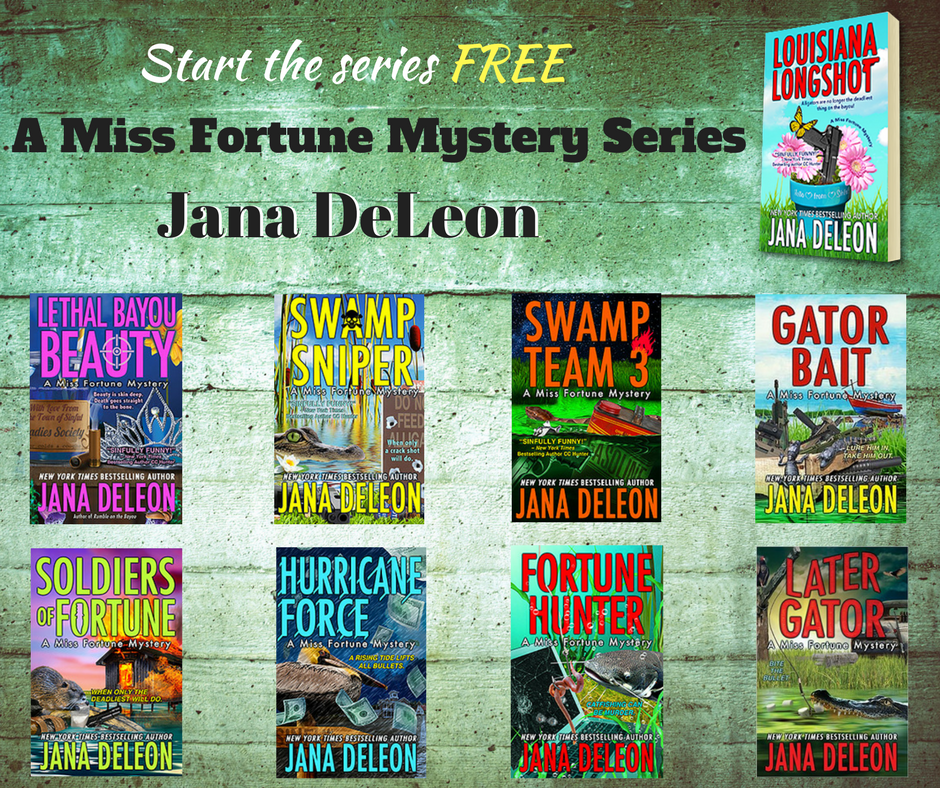 A Miss Fortune Series by Jana DeLeon
Start the series #FREE
Louisiana Longshot
AMAZON: http://amzn.to/2pJXEXN
NOOK: http://bit.ly/2qEt5GU
iBOOKS: http://apple.co/2rd39yz
KOBO: http://bit.ly/2r4EWy4
GOOGLE PLAY: http://bit.ly/29WeKM1
~~~~~~~~~~~~~~~~~~~~~~~~~~~~~~~~~~~
It was a hell of a long shot....
CIA assassin Fortune Redding is about to undertake her most difficult mission ever—in Sinful, Louisiana. With a leak at the CIA and a price placed on her head by one of the world's largest arms dealers, Fortune has to go off-grid, but she never expected to be this far out of her element. Posing as a former beauty queen turned librarian in a small bayou town seems worse than death to Fortune, but she's determined to fly below the radar until her boss finds the leak and puts the arms dealer out of play. Unfortunately, she hasn't even unpacked a suitcase before her newly inherited dog digs up a human bone in her backyard.
Thrust into the middle of a bayou murder mystery, Fortune teams up with a couple of seemingly sweet old ladies whose looks completely belie their hold on the little town. To top things off, the handsome local deputy is asking her too many questions. If she's not careful, this investigation might blow her cover and get her killed. Armed with her considerable skills and a group of elderly ladies the locals dub The Geritol Mafia, Fortune has no choice but to solve the murder before it's too late.
~~~~~~~~~~~~~~~~~~~~~~~~~~~~~~~~~~~
http://janadeleon.com/books/louisiana-longshot/overview 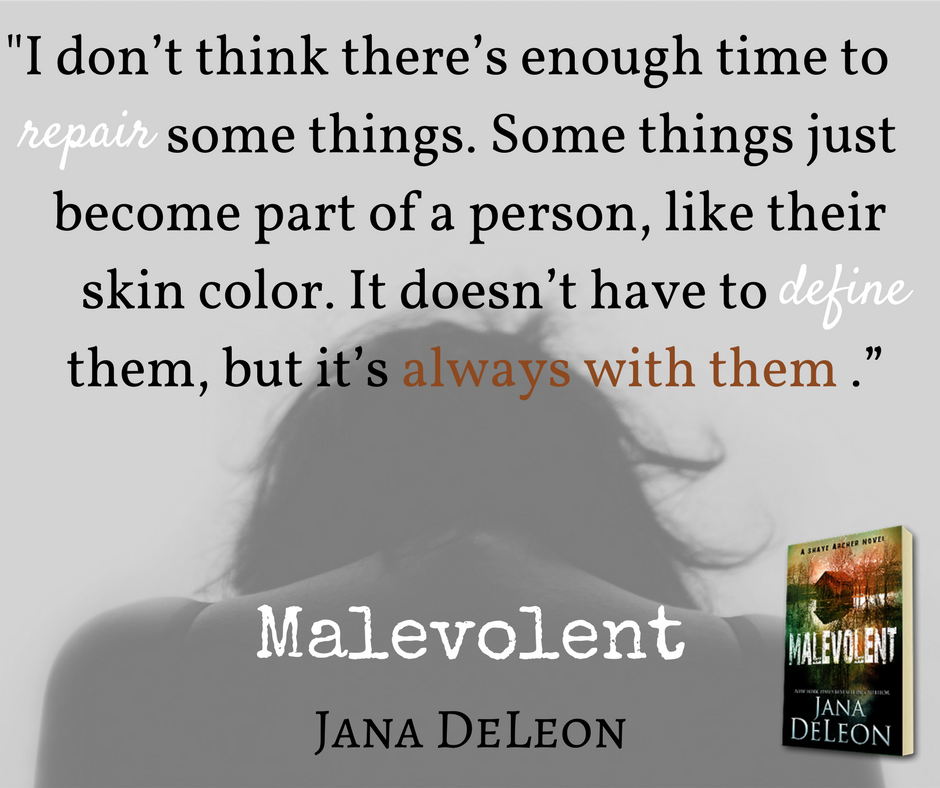 Malevolent, book one in the Shaye Archer series, is available #FREE
AMAZON: http://amzn.to/2pJSpHI
NOOK: http://bit.ly/2pKcHRf
iBOOKS: http://apple.co/2rejeVx
KOBO: http://bit.ly/2pwI4CR
GOOGLE PLAY: http://bit.ly/2pwGG34
~~~~~~~~~~~~~~~~~~~~~~~~~~~~~~~~~~~
Everyone wondered about Shaye Archer’s past. Including Shaye.
Shaye Archer’s life effectively began the night police found her in an alley, beaten and abused and with no memory of the previous fifteen years, not even her name. Nine years later, she’s a licensed private investigator, with a single goal—to get answers for her clients when there aren’t supposed to be any.
And maybe someday, answers for herself.
Emma Frederick thought her nightmare was over when she killed her abusive husband, but someone is stalking her and tormenting her with mementos from her past. With no evidence to support her claims, the police dismiss her claims as post-traumatic stress, but Shaye is convinced that someone is deliberately terrorizing Emma…playing a cat and mouse game with only one goal in mind.
To kill Emma. 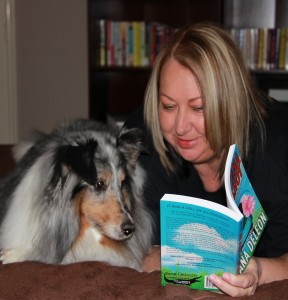 New York Times and USA Today bestselling author Jana DeLeon was raised in southwest Louisiana among the bayous and gators. Her hometown is Carlyss, but you probably won’t find it on a map. Her family owned a camp located on a bayou just off the Gulf of Mexico that you could only get to by boat. The most important feature was the rope hammock hanging in the shade on a huge deck that stretched out over the water where Jana spent many hours reading books.
Jana and her brother spent thousands of hours combing the bayous in a flat-bottomed aluminum boat, studying the natural habitat of many birds, nutria and alligators. She would like you to know that no animals were injured during these “studies,” but they kept makers of peroxide in business.
Jana has never stumbled across a mystery or a ghost like her heroines, but she’s still hopeful.
She now resides in Dallas, Texas, with the most spoiled Sheltie in the world.
FOLLOW JANA:
Website/Newsletter: janadeleon.com
Facebook: www.facebook.com/JanaDeLeonAuthor
Twitter: twitter.com/JanaDeLeon
Amazon:http://amzn.to/2qhptYDGoodreads: http://bit.ly/2pwmGxH
BookBub: http://bit.ly/2r56hAf