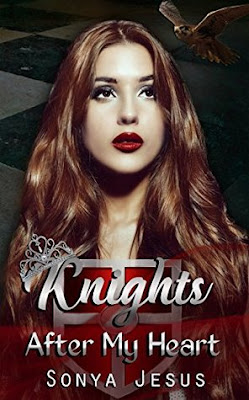 Knights After My Heart (Book 1)

Blurb
Amelia’s past issues and personal time limits propel her into a relationship that alters her normal life at Westbrook University. Connor, her new potential boyfriend, triggers jealousy, rehashes old relationships, sparks new ones, and ignites a rage in others that will devastate her ordinary life. As she desperately tries to hold on to her pre-Connor life, she struggles to balance the new-found attention while trying to follow her heart. Something she realizes is complicated… very complicated - because her heart has no idea where it’s going.

Connor may be the change Lia is looking for, but he is certainly not the ending Hawk wants for his Queen. Hawk’s invested too much time in planning his future to let some random guy walk away with his happily ever after. He will do anything to protect her virtue, even if it means protecting her from herself because Amelia belongs to him.
He’s chosen her…
He’s watched her…
He’s studied her…
He knows everything there is to learn about her…
And when the time is right she will reign his heart. 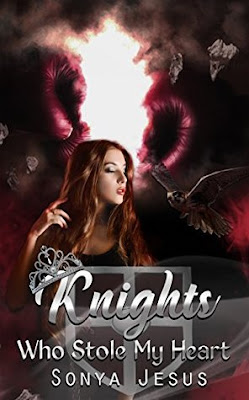 Knights Who Stole My Heart  (Book 2)

Blurb
Amelia’s heart is torn between the new, the old and the familiar but when her heart screams out what it wants, Amelia listens. It’s not always easy since a conflicted heart wants different things on different days, but she finds a way to work around her indecisiveness and focus on what she needs- what she thinks she can’t live without.

The closer Amelia gets to figuring out her love life, the more Hawk unravels. While he deals with loose ends and new threats, his strategic plans start to fall into place. Pawns advance, the King’s in the ideal position and the Rook hosts the Mad Lib Auction. What he doesn’t expect is for his Queen to be in danger and for Knights to steal hearts.

The Knights series is told from two perspectives. One from a confused college student who is just trying to figure out what her heart wants but has a hard time dealing with attention and getting over passed relationships. She’s secretly in love with the one guys she knows will break her. Her denial causes her to do things she will regret and the series captures the consequences.
Hawk is the fun part. He’s the suspense. The story is told from his stalker point of view and the series will show the evolution of his obsession. He’s been in love with Amelia for a long time. He absolutely hates all the new attention she is receiving and will stop at nothing to make her his.
Dylan. Absolutely. He’s a secondary character but there’s an ease to him. Like he’s just easy to be around. It also helps that he’s super cute.
I’ve written two books. One is releasing on the 28th and 2 anthologies. This year hopefully I get to release a few more anthologies for charity.
Is it wrong to say I love them all? They’re just so different from each other. The Knights series is lighter, (hopefully) funny, but with a stalker. The Damaged Love Series is more about the consequences of broken hearts with some mob ties and my stand-alone novel, Sing to Me is probably one of my favorites. It touches on something deeper, probably darker, but has a hint of hope in between the pages. I’ll be releasing that one this year.
I write whenever my brain tells me to. I like to think of my mind as a hotel, where all the characters live and they slam doors, yell, laugh and live there. That’s why I can't just work on one WIP at a time. It all depends on who is willing to speak to me.
Coffee!! It’s my thinking elixir.
My office. My husband helped me create one in our home so I could have a writing and makeup sanctuary J He’s sweet like that.
Oh my. That’s definitely one to think about because I love traveling. So, I would love to have a family vacation in Disney World but a romantic getaway in Italy. Lol, but if I have to go somewhere alone? Australia. Because (one) the accent is fantastic and (two) I want to hold a Koala bear.
I have an anthology coming up called Fear, Faith and Moving Forward. My story in it is called It’s All About the Bounce. It was probably one of the hardest things I have ever written. It hit home, delved deep into feelings I never thought I would write. So much so, that I almost didn’t submit it. But, it’s for a good cause and I believe in helping people.
I’ve been working on 3 WIPS. Sing to Me, Knights Book 3, and the novel sparked by the short story in the Lovestruck Anthology that just released, The Dragons’ Kiss.

About Sonya Jesus:
I’m just a regular girl who likes to write. Okay, I love to write. I always have. It’s just that, for a real long time I focused only on what I should be doing: getting my PhD in science. Then one day I decided I can do both, and that was a pretty fantastic day.
Since then, I have painted more, written more, opened up a makeup business all while still working on my PhD. No limits, no boundaries, just a sky full of possibilities as I hop around the clouds. Yes, I spend long hours, sometimes sleepless nights, but it’s worth it.
I truly believe in the happiness of fulfilling your dreams, and never giving up. So, here I am, loving every moment of it.