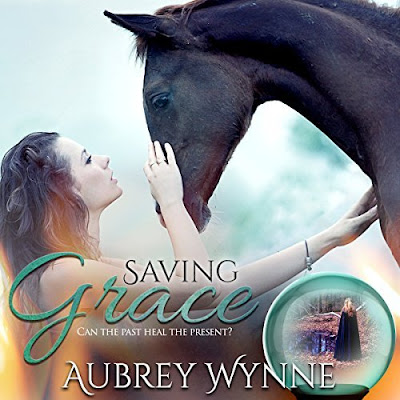 Chloe Hicks' life consisted of an egocentric ex-husband, a pile of bills, and an equine business in foreclosure until a fire destroys the stable and her beloved ranch horse. What little hope she has left is smashed after the marshal suspects arson. She escapes the accusing eyes of her hometown, but not the memories and melancholy.

Jackson Hahn, Virginia Beach's local historian, has his eyes on the mysterious new woman in town. When she arrives in Pungo, he is struck by her haunting beauty and the raw pain in her eyes. Her descriptions of the odd events happening in her bungalow pique his curiosity.

The sexy historian distracts Chloe with the legend of a woman wrongly accused of witchcraft. She is drawn to the story and the similarities of events that plagued their lives. Perhaps the past can help heal the present. But danger lurks in the shadows...

Chloe sat straight up, willing the fog in her head to dissipate. The bed sheets were twisted around her ankles. Sweat trickled down her back. The terror froze her limbs while she struggled to calm her thudding heart and listen for the sound all horse owners dread. But it was the smell that made her realize this was not a terrible dream.

Instinct took over and she scrambled from the four-poster, making a beeline for the back door and the barn. Her toe smacked against the corner of a wall as her eyes adjusted to the darkness. Oh god, not my babies. Not Bunny. Panic weighed down her legs as her bare feet hit the gravel. Everything seemed to move in slow motion. She tried to run down the long driveway, her eyes riveted to the red-orange flames shooting up into the black sky. Paul emerged from the darkness, his face colored yellow from the fiery glow. He signaled for her to take the front of the building as he disappeared around the back.

The frigid night air slapped her awake, but a horrifying screech from a panicked horse kicked in her adrenaline. Chloe reached the big, sliding doors and tugged them open. Heat smacked her face, and the smoke assaulted her lungs. Coughing, tears running down her cheeks, she slid back the bolts and opened the stall doors. On the other side, Paul’s voice faintly reached her over the crackle that filled her ears.

The fire had consumed the other half of the barn where the arena was located. Above her was the loft, filled with winter hay and the last of her savings, now adding fuel to the already intense blaze. She pushed the thought from her mind as the flames shot through the center of the alleyway and the arena caved in.

Grabbing one of the lead ropes that hung at each door, she smacked the first horse on the rump and sent him flying out of the barn. The first three horses on each side followed their stable mates into safety with little persuasion. But Duchess, her mother’s old mare, wouldn’t budge. Chloe threw the lead rope over her neck and forced a calm tone. “Easy, girl. That’s my girl. Walk on, now. Walk on.”

The old horse snorted and pranced but followed her out of the stall. When they neared the opening, she withdrew the rope and whacked Duchess’ hindquarters. With a leap, the horse disappeared into the gray haze. The acrid odor of scorched hair and burnt wood filled her nostrils. Embers popped and her cheek blistered. She wiped at it with her shoulder as she led two more horses out by hand.

Above them, a beam gave way and formed a fiery V. The horses must have sensed it also because they lunged ahead, snapping Chloe’s shoulders forward. She struggled to maintain her balance but fell to the matted floor, her knees striking the hard rubber. A boom behind her sent a spray of sparks, and pain shot along her backside. From the corner of her eye, she saw a strand of her hair spark. Frantically, she beat at it with her bare hand, putting it out on her neck. The heat was sweltering now. Images wavered in the flames that licked at the dry timbers of the remaining stalls and the heavy beams above.

Scrambling to her feet, Chloe ran outside into the frigid night and stumbled down the drive to help Paul. As she reached the other side of the barn, she doubled over as a coughing spasm racked her body. Hands on her knees, gasping to pull air into her tight chest, she heard Paul yelling over the crackle and whinnies.

“Bunny won’t leave the stall, and won’t let me near her foal.”

His hand tightened around her arm and pulled with such force her feet almost left the ground. Plunging back into the smoking hell, they entered Bunny’s stall and found the foal in the corner.
“Paul, I’ll get the foal then Bunny will follow.”

Another loud snap from above. She grabbed the lead rope dangling from the horse’s halter and handed it to the trainer. Running a palm down her mare’s neck, she spoke soothingly, “Atta girl, Bunny. There’s my girl. Let’s your get your baby out of here.” The mare’s ears perked at her voice and words. Chloe tossed a rope around the foal’s neck and pulled. The baby gave to the pressure and followed Chloe out.

Behind her, a loud, splintering crash was followed by a shrill squeal. Her stomach twisted as she turned to see her trainer pulling at the lead rope. A fiery beam pinned Bunny as she thrashed, her legs flying in the air. One hoof caught the man in the head, and he crumpled to the ground.

Fighting for air, her chest a tight ball of agony, Chloe stumbled back in and grabbed Paul under his arms. She dragged him with the last of her strength and shuffled backwards until her feet tripped on something solid. She fell, his body tangled in her legs as they both landed with a thud. A sob ripped at her raw throat at the sound of a muffled shriek. Tears spilled down her burning cheeks as she shook the lifeless body on top of her. Chloe collapsed hand rested on Paul’s chest, finding hope in the slight rise and fall of his shallow breathing. In the back of her brain, the sound of sirens wailed before the world went black.

Bestselling and award-winning author Aubrey Wynne resides in the Midwest with her husband, dogs, horses, mule and barn cats. She is an elementary teacher by trade, champion of children and animals by conscience, and author by night. Obsessions include history, travel, trail riding and all things Christmas.

Her short stories, Merry Christmas, Henry and Pete's Mighty Purty Privies have won Readers Choice Awards and Dante's Gift received the 2016 Golden Quill and Heart of Excellence award, as well as being a Maggie and Aspen Gold finalist.

Besides her Chicago Christmas novellas, Aubrey will release "A Vintage Romance" series inspired by tales of her stepfather, who served for the British Air Force in WWII. The stories will be set in the 40s & 50s. Her medieval fantasy series will launch in 2017 with Rolf's Quest.

Subscribe to Aubrey's newsletter for new releases and exclusive excerpts and free stories.

A place of handsome knights, dashing gentlemen, beautiful, sassy women, and romance from the past to the present. You’ll also have some opportunities to help promote Aubrey with her upcoming releases if you feel so inclined. There is fun to be had, prizes to be given, and heroes and heroines to fall in love with. Come join Aubrey's street team.