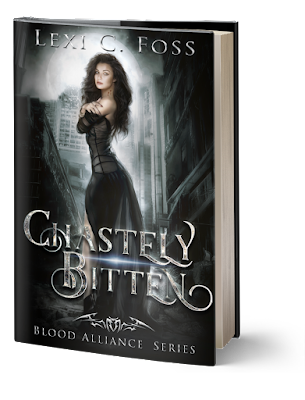 Chastely Bitten:
Kindle Unlimited - Amazon: http://geni.us/jf52
Blurb:
Once upon a time, humankind ruled the world while lycans and vampires lived in secret.
This is no longer that time.

It is my duty to obey, to give my body and blood to a vampire master until he no longer has use for me.

There is no escape.
Nowhere to run.
Follow the rules or die.
I don't want to die.

Twenty-two years of conditioning has crafted the perfect poison--a weapon my enemies won't see coming. I'll break her, train her, and use her to take down everyone who stands in my way.

Welcome to the future where the superior bloodlines make the rules.
Proceed at your own risk. 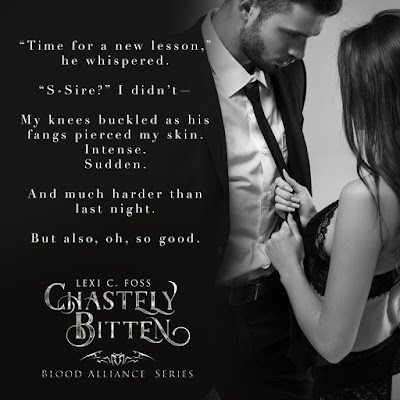 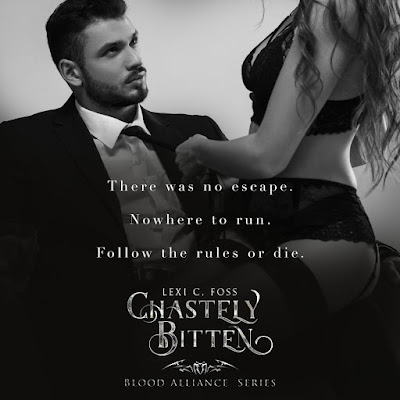 Excerpt:
“Item seventeen is a twenty-two-year-old Caucasian female with mahogany hair and chocolate-colored eyes. Human is five-foot-seven, one hundred and thirty pounds, and speaks English, Spanish, Japanese, and German. Her other intellectual aptitudes are detailed on page nine of your guide.”
I studied the brunette on the podium and recalled the qualities I memorized an hour earlier. Her profile suited my tastes and purpose—intelligent, multilingual, gorgeous, and innocent. Just what I needed.
The voracious gazes in the room as she stepped onto the podium confirmed this would be an expensive venture, but I enjoyed a challenge.
"Shall we start the bidding at one million?” The portly announcer seemed quite pleased with this amount.
I doubled it with a wave of my paddle.
Her sweet blood sang to my baser senses, which was entirely the point. She came from a rare breed of human who resembled ambrosia to my kind, and her virginity only enhanced it. The loss of her innocence would tamper the taste slightly, but not by much. Hence her value. I could keep her for days, months, years or eternity, if I chose.
A beautiful pet to own and do with as I wished. And I would, just not in the way everyone anticipated.
I smiled as I raised my paddle again, tripling my neighbor’s amount.
This woman would belong to me by the end of the night. To fuck. To eat. To kill. Whatever I wanted.
Poor thing. I almost felt sorry for her. But she seemed strong enough standing nude on the platform for all of us to examine her every attribute. I doubted she saw much beyond our legs given the spotlight illuminating her gorgeous features and face.
So pretty.
And so very much mine.
© Lexi C. Foss 2018 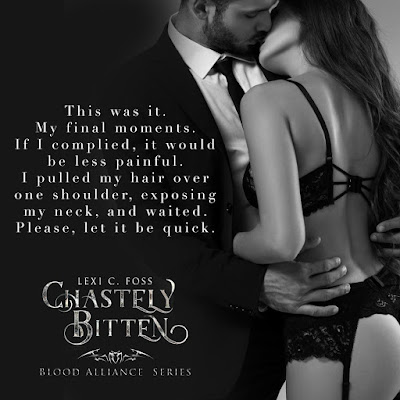 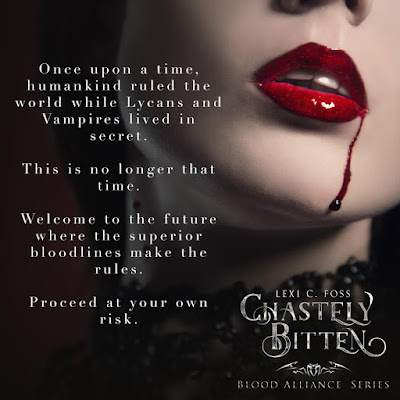 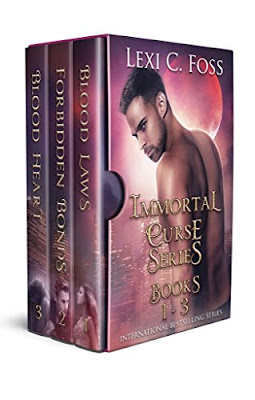 #Amazon: http://geni.us/AgpD #iBooks: http://geni.us/JdAW8 #Nook: http://geni.us/lcBbPxQ #Kobo: https://bit.ly/2Nst0yk #GooglePlay: http://geni.us/bYxnV
Series Trailer: https://drive.google.com/open?id=1L_ZKmnuWQkBYWGuRm4wv2cImr27-IWet
“What are you wearing under this dress?”Not what she expected him to say. “Excuse me?”His teeth sunk into her lower lip, making her yelp. “Focus.”She frowned. “A thong and a strapless bra.” Both black and lacy. Lingerie was one of her secret indulgences. Not that she ever put them to good use.One of his hands drifted from her hair to her waist, then down to her a**. His palm flattened and forced her to arch up into him. A breath hitched in her throat at the feel of his growing arousal. Mixing business and pleasure?His lips brushed hers in a chaste kiss that belied the passion they were feigning for the camera. “The dress will have to stay then.”“What’s wrong with my dress?” It hit her mid-thigh and clung to her curves. She looked good in it.He ignored her.“You’re going to see things tonight that will make you want to scream, but you must remain calm and quiet. Mortals who overreact die, and they die badly.”Blood Laws © Lexi C. Foss 2017
Dark Provenance Series - Daughter of Death 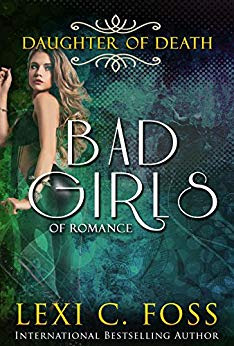 Amazon KU: http://geni.us/koCxUf
Book Trailer: https://drive.google.com/open?id=1DcG_9gWeirwcRI-juAxe3ypNmDA5ljne
A dead body.A missing daughter.A silver blade.All the clues point to one person: Me.
My name is Evangeline, and I’m a retired assassin who wants nothing to do with the underworld. But an edict from a Demonic Lord forces me to return to the man and the life I left behind.I have seven days to prove my innocence.
Whoever set me up is going to die.
Mershano Empire Series - The Charmer’s Gambit Amazon KU: http://geni.us/g7k7v
Book Trailer: https://drive.google.com/open?id=1l0qV5dlX1bqclHKeqNTZBQqyuXKmsCWD
He set his sights on the wrong girl…
Me.
Law school taught me a lot of things, but nothing prepared me to deal with this determined, hotter-than-Hell millionaire. Don’t get me wrong, I’m flattered. But resisting Will Mershano is harder than passing the bar. He’s everything: sexy, confident, intelligent. And he wants me.When he hires my firm to represent Mershano Vineyards, I’m left with no choice but to work right alongside him—or forfeit my job. There’s only one problem. He doesn’t know about my past or how it stalks me at every turn. All he wants is a little flirtatious fun, but Will’s playing a dangerous game.And there’s more at stake than just my heart. . .
About Lexi C. Foss: 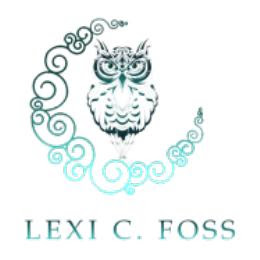 Lexi C. Foss is an award winning and bestselling author of paranormal romance. She loves complex plots, twists and turns, and writing fantasy with strong, realistic elements. Many of her readers comment on how her worlds feel real, and she not-so-secretly wishes they were—at least some of them.
https://www.bookbub.com/authors/lexi-c-foss
https://www.facebook.com/LexiCFoss
https://www.twitter.com/LexiCFoss
www.LexiCFoss.com
Posted by Gia Guido at 9:00 AM