Release Blitz of Hell Hath No Fury by Annabelle Anders 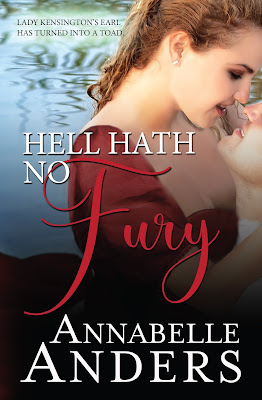 Most London Misses are looking to find a husband, Cecily Nottingham wants to get rid of one.

To keep the money, he has to keep her as well…
Cecily Nottingham has made a huge mistake.
The marriage bed was still warm when the earl she thought she loved crawled out of it and announced that he loved someone else.
Loves. Someone else.
All he saw in Cecily was her dowry.
But he’s in for the shock of his life, because in order to keep the money, he has to keep her.
With nothing to lose, Cecily sets out to seduce her husband’s cousin, Stephen Nottingham, in an attempt to goad the earl into divorcing her. Little does she realize that Stephen would turn out to be everything her husband was not: Honorable, loyal, trustworthy…Handsome as sin.
Stephen only returned to England for one reason. Save his cousin’s estate from financial ruin. Instead, he finds himself face to face with his cousins beautiful and scorned wife, he isn’t sure what to do first, strangle his cousin, or kiss his wife. His honor is about to be questioned, right along with his self-control.
Amid snakes, duels and a good catfight, Cecily realizes the game she’s playing has high stakes indeed.  There are only a few ways for a marriage to end in Regency England and none of them come without a high price. Is she willing to pay it? Is Stephen? A ‘Happily Ever After’ hangs in the balance, because, yes, love can conquer all, but sometimes it needs a little bit of help.

“Stephen!” she gasped, shocked by what he seemed intent upon doing. “What on earth are you doing?”
He  looked up at her, smiling lustily. “Nothing.”
And then he went about his business.
Not in a million years had she ever imagined allowing a man to do… this!
And with his mouth no less!
“Oh, my God! Stephen, you are wicked,” she said, feeling quite wicked herself as she grasped the sides of his head.
He was not to be deterred. His tongue stroked and sucked in much the same way he’d done with her mouth, causing a new multitude of sensations to spiral inside of her.
He paused only a moment to look up at her.
“Surrender, Cecily.” He said. Giving her a lazy, sensual smile, “And prepare to die.”

A little about the music in the trailer…

The song for the trailer was written by myself and my sister, Marcie Stanley. Marcie’s beautiful voice is featured while she plays the piano… Due to illness, Marcie doesn’t perform much anymore so it was very special for me to be able to use the song that we wrote together, over twenty years ago.
The Song is titled “Disposable Relationship.”  I have a few tweeks for the lyrics to fit Stephen and Cecily’s situation.  Next time Marcie is up to recording I’ll change them to this:
For you, I would have done anything.
For you, can NOT have my soul.
For once you looked at me with empty eyes, the consequences… began to roll…
You’re a disposable relationship, damn the ton I’ll see your body gone. I’m throwing away a piece of my heart with you.
with the ash and the chamber pots of my life… you’re going down and I won’t cry… anymore…

Review by Gia:
I don't read historical romances.  That's one of the genre I had not read and stayed away from it.   That being said when this one popped up on my kindle and I realized it had Countess and a Earl in it I kind of freaked out.   I had that moment of omg do I attempt to read this or do I apology for signing up for an ARC of genre I don't read.   I went back to the blurb and yeah I had to give this one a try.   After all my worrying, I really did like this one.
Cecil married Flavion.  Flavion is the Earl of Kensington.   Cecil thought the marriage was based on love but she found out shortly after that Flavion just wanted her dowry.  Cecil is a great character and has a fun group of friends.   She wants out of the marriage and comes up with a plan to get Flavion to divorce her.   She gets help with her plan from Flavion's cousin Stephen.  Flavion is not a likable character.  Right from the beginning of the story, he is unlikable.   Stephen on the other hand, is a completely likeable character.   As Stephen and Cecil spend more time together an attraction builds.   There is also secrets and danger in this story.  It has a good story-line that kept me interested.
4 Amazeballs Stars! 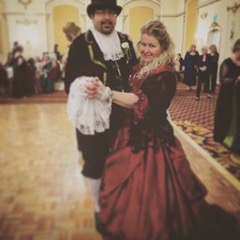 Married to the same man for over 25 years, Annabelle Anders is mother to three children and two Miniature Wiener dogs. After owning a business and experiencing considerable success, she and her husband got caught in the financial crisis and lost everything; their business, their home, even their car.
At this point, she put her B.A. in Poly Sci to use and took work as a waitress and bartender.
Unwilling to give up on a professional life, she simultaneously went back to college and obtained a degree in Energy Management.
And then the energy market dropped off.
And then her dog died.
We can only be grateful for this series of unfortunate events, for, with nothing to lose and completely demoralized, she sat down and began to write the romance novels which had until then, existed only in her imagination.
She is happy to have found her place in life.
Finally. 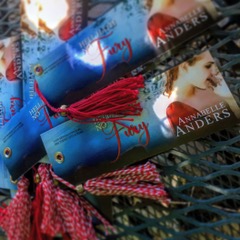 I write under the name ANNABELLE ANDERS and my first book, Hell Hath No Fury released on 7-7-17.   I love the date!
Anyway, my novel is an edgy Regency Romance. I say ‘ edgy’, because it’s a little off the beaten path. Whereas most heroines in Regency Romances begin the story NEEDING a husband, my character, Cecily, needs to get rid of one. The man she married (an earl)  turned out to be a complete and utter toad (not literally! LOL)

My QUESTION FOR THIS GIVEAWAY is: Does it bother you that the hero is not the man she is married to in the beginning? E-mail your comment to andersannabelle@gmail.com  along with your address and I’ll send you a Hell Hath No Fury Tasseled Bookmark. (First 20 Respondents) Please include the name of the group or blog you are responding from

I look forward to discovering your thoughts on this concept!