Promo Tour for ESCAPE FROM BEHRUZ by Judy Meadows

ESCAPE FROM BEHRUZ
by Judy Meadows

A trek through the mountains to Iran--with her baby, her puppy, her secrets, and the man she must never love. 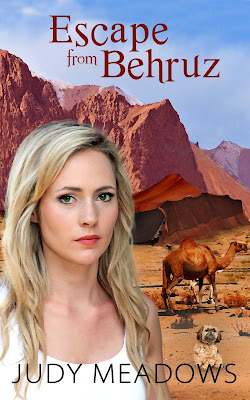 Two years ago, abandoned, despondent, and pregnant, Olivia was pressured into letting her sister and her sister’s husband, the sultan of Behruz, adopt her baby and pretend he’s their natural child. Her sister died soon after the baby was born, so Olivia has been able to raise her son after all. The sultan lets her stay in the palace, but if she ever reveals the baby’s true parentage, he’ll make sure she never sees the child again.

Now rebellion threatens the country. And the baby’s real father, Rashid, has returned. He arranges for Olivia and the baby he doesn’t know is his to escape with him to Iran, traveling under cover of the nomad migration.

Can Olivia spend nights in a tent with Rashid without succumbing to the attraction that has always drawn her to him? Can she survive the trip without revealing her secret and without losing her heart to him once again?

When the meal was over, the women helped her put on her nomad costume. They wanted to do everything. Their hands were all over her, pulling at her sweater and trying to open the snap and zipper of her jeans. They giggled and exclaimed when they saw her small, pale breasts, but the biggest source of delight turned out to be her lacy briefs. She was relieved when they covered her with the new clothes.

“This reminds me of a wedding,” Fatima said when they all stepped out of the tent. “When a Qashami girl gets married, the women all help her dress in her wedding clothes and then they escort her to her husband’s tent.”

Walking toward the tent of her “husband,” Olivia felt like a bride. The mantle framed her face and fell down her back like a bride’s veil, and the long skirt swayed with every step. Rashid stood in front of the tent talking to Saddiq. He was wearing a long shirt and a wool vest like those worn by the other men. Time stopped for several heartbeats when his eyes fell on Olivia. He seemed to straighten up, to become taller, and everything about him became very still.

She met his gaze boldly. The petticoats swished around her legs when she walked. She felt the swing of her arms, the sway of her hips, even the slight bounce of her breasts. All the women stood behind her, waiting for Rashid’s reaction.

“Spin around again like you did for us in the tent,” Fatima whispered to Olivia.

Rashid’s nomad clothes made him look primitive and very male. His eyes were intent on her, like the eyes of an animal watching its prey. He was motionless except for a slight quivering of his nostrils.

Olivia lifted her arms slowly, and the women stepped back away from her. Then she began the pirouette. She moved as if in a trance. Everything seemed to happen in slow motion. But still the skirt rose, its colors blurring as she spun, and she felt dizzy and flushed when she stopped. She gave Rashid a smile that came from some new knowledge.

“You are a temptress,” he said in English. His eyes were dark pools that beckoned her to tempt and be tempted.

“The ladies are waiting to see what you think of their handiwork.”

He stepped toward her and reached his hand up to touch her face at her temple. Then he slid it down until it cupped the nape of her neck. A shiver of response rippled through her, but she didn’t move.

“She is very beautiful,” he said in Farsi. “The costume is perfect. She is perfect.” He kissed her lightly on the lips. The speculations and remarks of the nomads hushed. A crow cawed in the distance, and then it was silent too. She was mesmerized. She felt possessed.

Laila’s trip to Behruz, her father’s country and home of her early years, is meant to be one last adventure before she joins her dreamboat fiancé in Texas. But Behruz casts a spell on her. Her knowledge as a midwife is needed there. Serving women’s health in a country where no one talks about “such things” presents interesting challenges.

Majid, a doctor trained in the States, has returned to Behruz to serve his people. He’s ready to settle down, but because of old family wounds, American women are forbidden to him. That’s no problem until Laila walks into his clinic—with a sassy smile, a jar of semen, and a blond fiancé back home.

I grew up in Minnesota but now live in a small town in Oregon with my husband Jim. I’m a mom, grandma, wife, gardener, cat-lover, nerd, and traveler.

I’ve had a few different careers, starting with work as a systems engineer for IBM after college. Then there was my “earth-mother” stage. Jim and I had a farm in northern California where we raised kids (one of our own and several foster kids), apples, Asian pears, and raspberries. When we retired from farming and moved to Oregon (when we should have been done with the parenting thing), we added one more child, a 10-year-old girl adopted from a Russian orphanage.

Next, when our new daughter was settled into the family, I became a doula and childbirth educator. (See www.doulajudy.com and www.mexicanmidwives.com) During 20 years of working as a doula, I helped 460 women in labor.

During a sabbatical from career number one (computers), I spent a year in the Middle East, traveling and camping in a Landrover. Later, Jim and I spent a year and a half in Iran working as computer engineers on a project that was meant to modernize the Iranian phone system (but was interrupted by the revolution). I based the fictional country of Behruz on Iran and Afghanistan as I knew them back then, before war and political turmoil altered both countries.

Now, at last, I’m fulfilling a lifetime dream by writing. My second romance novel, Midwife in Behruz, which will come out at the end of 2017, draws on my experience with childbirth. I’ve just started plotting the final book in what will be a trilogy of stories set in Behruz.