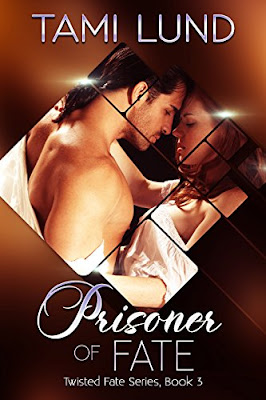 The bad guys are winning. There are two types of shifters in the world: Rakshasa--the bad guys who want to destroy the world—and Light Ones—the good guys who want to protect it. Lily's one of the good guys, the last of her kind, the only one who can save their species.She's also a 170-year-old virgin who isn't in a hurry to get tied down. And then she meets Matteo, a Rakshasa who has been a prisoner of the Fates for a thousand years. They should be mortal enemies. She shouldn't strike up a friendship with the man. She certainly shouldn't develop feelings for him. And while we're listing don'ts, she definitely shouldn't give the man her most precious commodity: her innocence. Because otherwise who's going to save humanity? 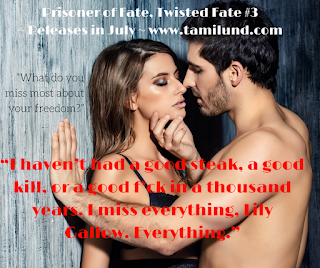 Finally, finally, the First allowed them to talk about the reason for their visit. While Prim explained, Lily watched the door behind the large wicker chair. Was there really a Rakshasa in there? How had the First captured him? Why did he hide in the dark room? And why in the world did she keep a Rakshasa as a pet anyway? Lily was practically vibrating with curiosity.
“Would you like to see the First’s pet?”
Lily jumped at the sound of the voice, and then she blushed when she realized the Fate was speaking directly to her. She’d thought she was being unobtrusive, as she sat there and stared at the partially opened door, but apparently her curiosity was far too obvious.
Lily swallowed and said, “Is it really a Rakshasa?”
The First smiled and touched Lily’s cheek with one perfectly manicured finger. The tips of her nails were painted silver. “The First will show you her pet, but you must promise to stay out of his reach. The First’s pet has a taste for Chala.”
The Fate stood up and lifted her wine glass and glided over to the large wicker chair. Bending over, she reached behind the chair and grasped a thick, heavy, silver chain. She placed her drink on the small table and then used both hands to pull on the chain. She tugged three times, until Lily sensed movement in the shadows behind the door.
And then a man stepped into view. He was tall, as tall as Gavin, who was the tallest man Lily had ever met. His dark hair hung well past his shoulders. His face was clean-shaven, something Lily had never seen before on a shifter. He wore only a pair of white cotton, loosely fitted pants with a drawstring at the waist.
If Lily thought Gavin had mouthwatering abs, he had nothing on this particular shifter. Each muscle was sharply cut under his skin, from the top of the waistband of his pants to his collarbone. A single, thin trail of curly black hair led from just above his bellybutton down into his pants. His arms and shoulders were equally as impressive. He was an utterly glorious specimen of maleness, except for one startling attribute.
His eyes were black as night.
“Stay away,” the First warned, and Lily gave a little jump, as she realized she’d come out of her chair and had been walking toward the man with a thick silver collar around his neck. The collar connected to the chain in the First’s hands. The man watched her with an intensity that caused her insides to quiver.
He probably thinks I’m dinner. And yet her nipples contracted almost painfully. Who the heck would be turned on by the idea of being dinner?
~~~

The First’s pet Rakshasa lounged in the wicker chair, one cotton-covered leg crooked over the armrest, the other perched on the floor. He hummed a tune Lily didn’t recognize, while he twirled what looked like a grilled jumbo shrimp on a stick.
He abruptly stopped humming and lifted his face and sniffed the air. Lily scuttled behind a nearby pillar. She waited until her heart wasn’t beating quite so erratically, then she peeked out from behind the column.
The shifter stared directly at her with unblinking black eyes.
“Oh,” she squeaked, unnerved by the solid, steady stare.
“Chala.” His voice was deep, like that actor from the insurance commercials she saw on television.
Lily felt that intense sense of awareness sweep through her again, licking at her insides, making her feel both hot and cold at the same time. She dropped her head back and leaned against the cool pillar and gave in to the racking shiver.
“No need to hide, Chala. I cannot harm you so long as you remain outside the reach of my lovely necklace.” He chuckled at his own joke.
Lily risked another look. He still lounged on the wicker chair, although the shrimp on the end of the stick was gone. And he still watched her with that breathtaking intensity.
“I–I didn’t think you would be awake,” she stuttered.
“I wouldn’t think you would be awake,” he countered. “It is terribly late. Is it not past your bedtime, Chala?”
Lily slowly stepped out from behind the pillar and stood next to it, feeling oddly exposed. Not returning to her room to change suddenly seemed like a poor decision.
“It’s Lily,” she said. “Lily Gallow. I hate it when people call me Chala,” she said, hoping he would appreciate the show of solidarity. She had to believe he hated to be referred to as “Pet.”
“Why? Are you not a Chala? Have my senses finally gone askew, after all this time?”
“Yes, I am. But I have a name, and I prefer people use it. Just as I imagine you do.”
“Are you asking for my name, Chala?”
“Yes,” she said boldly. “You must have one. Everyone has a name.”
“The First does not,” he pointed out.
“She does,” Lily countered. “She just chooses not to use it. You, I assume, didn’t have a choice in the matter.”
He paused, watching her for several heartbeats worth of time. “No,” he said finally. “I was not given a choice.”
Lily rolled her eyes. “I take it you aren’t going to tell me.”
The shifter chuckled. “Maybe I do not remember. I have been called Pet for a thousand years, you know.”
Lily shook her head. “You remember. I’m sure of it.” She paused, and when he still did not offer his name, she asked, “What do you miss most about your freedom?”
The shifter stared at her, blinking far less frequently than most other people she’d encountered. Finally, he sighed and kicked his foot into the air.
“I haven’t had a good kill, a good steak, or a good fuck in a thousand years. I miss everything, Lily Gallow. Everything.” 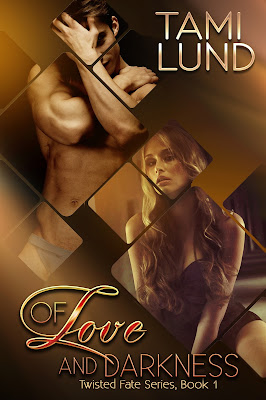 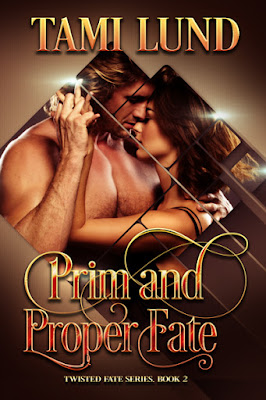 Tami Lund writes. And drinks wine. And wins awards. She also loves romance, and is writing happily ever afters, one book at a time.

Those happily ever afters come in contemporary and paranormal, so pick your poison. Or try them all. You’re bound to find something that curls your toes and makes you smile.

Probably, there’s a new book releasing soon. You should stalk Tami on social media, so you know when.

And most important, if you’ve already enjoyed one of Tami's books, please let other readers know by leaving a review on the site from which you bought it. Otherwise, how will they know which book to read next?