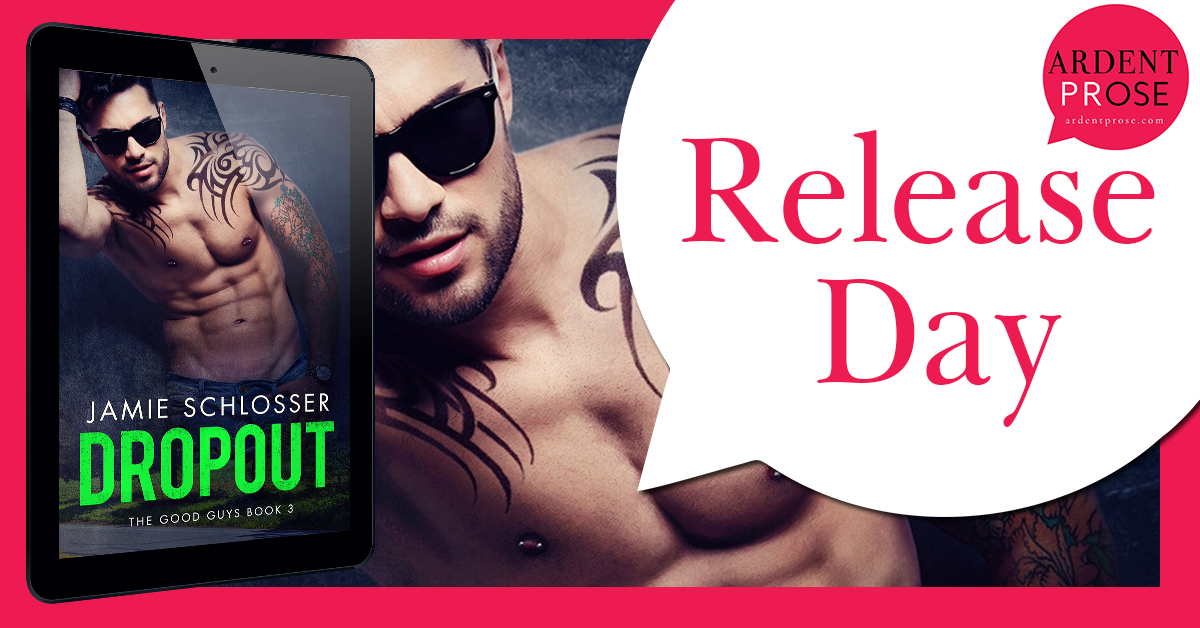 JIMMYOver the past year, I’ve been called a lot of things. Slacker. Troublemaker. Party animal.I thought I was on top of the world. Turns out, I was pretty close to rock bottom.Now I have a new title: college dropout.Talk about a reality check.But I’ve got a chance to redeem myself. One summer to turn things around. Two months to prove I’m not a complete f*ck-up.It’s time to change.I want to get back to being one of the good guys.MACKENNAI have everything I need to live out my dream of being a reclusive songwriter—my guitar, my notebook, and blissful silence.At least, I did until Jimmy moved in next door.With tattoos, piercings, and mischievous green eyes, he’s got bad news written all over him. And last time I got with a bad boy, it ended horribly.Jimmy makes me feel things I shouldn’t feel. Want things I shouldn’t want. He’s a hazard to my carefully laid plans.But he’s only here for two months.I can resist him...right?

*Although DROPOUT is part of a series, it can be enjoyed as a standalone.

Jimmy Buffet’s ‘Cheeseburger in Paradise’ blared through the house, and I followed the music to the kitchen. I wasn’t sure what I would find, but as long as it wasn’t my neighbor making out with her neighbor I was good.Turning the corner, I stopped dead in my tracks at the sight in front of me.It wasn’t Beverly. Or Ernie.And I most definitely wasn’t good.A guy wearing nothing but camo-print underwear and a peach-colored apron stood in front of the stove. He was facing away from me, and I caught sight of a large tattoo—angel wings—across the expanse of his muscular back.Surprised, I let out a high-pitched squeak. The sound got the stranger’s attention and he started to pivot in my direction.My eyes fell to his sculpted ass, the muscles flexing as he shifted his weight from one foot to the other. He wore briefs. Not boxers or boxer-briefs—actual tighties. No guy should look good in those, but damn, he did.His black hair was shorter on the sides and longer on top. Some of the inky strands fell over his forehead, falling to just above his bright green eyes.His lips were parted in surprise, and something flipped in my stomach at the sight of his mouth. The bottom lip was twice the size of the top. Plump. Pouty.Dark tattoos painted his chest and he had colorful flowers down the length of his left arm. And…Is that a nipple piercing?Because of the apron, I couldn’t see his abs, but my guess was that he had a solid six-pack under there.I opened my mouth to say something—anything.I wanted to ask him what he was doing in Beverly’s house. Or apologize for walking in on him while he was naked.Instead, my social awkwardness presented itself full-force with the words that tumbled out of my mouth next.“If you tried to hide in the woods, at least no one would be able to see your ass.”His emerald eyes widened. “What?”Figuring he probably didn’t hear me the first time because of the loud music, I raised my voice. “Camouflage underwear. Your butt would totally blend in with the bushes.”Looking like he was caught between laughing and being outraged, he opened his mouth to respond.Then all hell broke loose.

Review by Gia:
Dropout is book three in The Good Guys series.  It can absolutely be read as a standalone.   The prologue starts with Mackenna's POV and it had me hooked.  After reading it, I couldn't wait to see what happened  and I was a little grumpy that chapter one switched to Jimmy's POV so I had to wait a little bit to see what happened to Mackenna and Jaxon.  Mackenna is an amazing girl that  has gone through a lot.  Her first relationship with Jaxon was a not healthy.  She has moved on but it still haunts her.   Jimmy is not a crossroad.  He has failed college.  He lived up the college life instead of attending classes and studying now he is trying to make things better.  He goes to spend the summer with his Grandma.  His Grandma is super cool and a little bit crazy.  Mackenna is Jimmy's Grandma's neighbor.  Mackenna and Jimmy have a great connection.  Mackenna is a little hesitate to get into a relationship but they just kind of fall into one.  This one is a really great story that had me hooked form beginning to end.
4 1/2 Amazeballs Stars!

Jamie Schlosser grew up on a farm in Illinois surrounded by cornfields. Although she no longer lives in the country, her dream is to return to rural living someday. As a stay-at-home mom, she spends most of her days running back and forth between her two wonderful kids and her laptop. She loves her family, iced coffee, and happily ever afters.