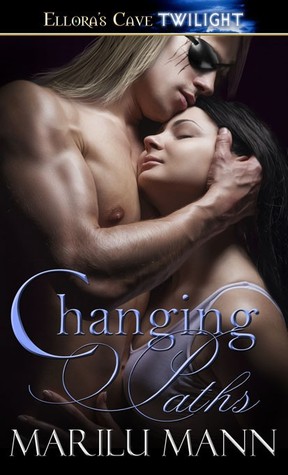 by Marilu Mann
Synopsis:
Harmony, Denied by the Moon, is unable to shift to animal form. She swallows her pride to return to her Pack for her daughter’s sake. The moody teenager might be Moon Called—a true shapeshifter. Now Harmony fights the instant heat she feels for a scarred, sexy shifter. Gareth is all that’s good and bad about the Pack.

Gareth, Second in the Pack, has made peace with being a loner. No shifter female will have him because of his scars—internal and external. Harmony makes him wish he was whole. He fights it, but he’s consumed by a burning desire for this amazing woman. How can he convince her that she’s his mate?

Everything has to wait as the Wisconsin winter closes in. When Moonlust takes control, need and desire overcome everything else. As Harmony seeks her truth, her path encroaches, threatening everything she holds close.
Review by Gia:
Changing Paths is book 4 in the Lusting Wild series.  It can be read as a standalone.  I haven't read any of the other books in the series and I was not lost reading this one.   Micah and Olivia are the main characters is book 3, Changing Focus.  They are in the book too but this book focuses on the story of Harmony and Gareth.  Harmony and Gareth story is a great story.  Both seem to be broken and you can only hope while you read that they can together fix each other.
Harmony is moon denied and can't shift.  Her being moon denied lead her to leave the pack.  She is now returning to the pack with her daughter after leaving an abusive relationship.  Her ex is moon denied too and is not ready to let  Harmony and his daughter go.
Gareth is Second in the Pack.   He is a loner and does not believe any one will expect him because of his scars.  Then Harmony comes in.  Neither Harmony or Gareth are looking for a relationship but fate has something else planned for them.
Harmony and Gareth don't really fight their feels for each other.   Gareth is perfect.  He even gets along with Harmony's daughter right away.  Harmony and Gareth are perfect together.    They both have past demons to overcome though.  Harmony has also lived her life thinking she was moon denied but that may not be the case.  Her ex is also lurking around causing problems but now she has Gareth and the pack to help her.   Gareth also has some things he needs the deal with.  His brother pops up and they both have some things to mend.
I loved reading this story.  This was the first book I read in this series but I plan on reading the rest of the series.
5 Amazeballs Stars!
About the Author:
Marilu Mann brings the steaminess of the Louisiana bayous to her books and she doesn't stop there. Marilu's willing to travel to the frozen tundra of Wisconsin to heat up those northern nights and melt a little snow. She'll also circle the world to Wales, Ireland, Scotland and back just to bring you books that make you sweat.

Currently residing in Texas, Marilu is an avid armchair traveler. Her sexy shifters will set your blood to boiling in no time. Owned by one Diva Teen and various animals, Marilu keeps busy writing the novels her readers beg for.

Marilu is thrilled to be a part of the Ellora's Cave family and loves to hear from readers.
Posted by Gia Guido at 9:53 AM