Ren Garcia is a Science Fiction/Fantasy author and Texas native who grew up in western Ohio. He has been writing since before he could write, often scribbling alien lingo on any available wall or floor with assorted crayons. He attended The Ohio State University and majored in English Literature.

Ren has been an avid lover of anything surreal since childhood. He also has a passion for caving, urban archeology, taking pictures of clouds, and architecture. He currently lives in Columbus, Ohio with his wife, and their four dogs. 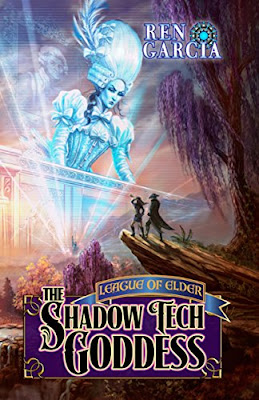 Beware the woman who does not exist, yet is everywhere. Paymaster Stenstrom and his Countess-in-Waiting, Lady Gwendolyn of Prentiss, are paid a bounty of riches to perform a simple task, and then everything changes. The weight of the Universe comes down upon them. Paymaster Stenstrom learns he is in the gaze of the destroyer of universes, the Shadow tech Goddess, and also that he is in a race with sinister forces hoping to curry her favor and bring about the end of all things. It is a race he and Gwendolyn must win. They will investigate ancient places hidden in plain sight and travel to long lost worlds unseen in ages. They will feel fear such as they have never known and walk in a Garden of Horrors where all is revealed and Stenstrom comes to know the truth of his place in the universe. The Shadow tech Goddess silently watches the doings from her throne in the Hall of Mirrors, seeing all, collecting information, and her verdict might finally be cast one way or the other.

1)--Ren is the only member of his extended family with blue eyes--everybody else has brown. Ren once made his mother cry by announcing she couldn't possibly be his mother due to the color of her eyes.

2)--Ren was a JetMech (Aero-Propulsion Specialist) in the Ohio Air national Guard.

3)--Ren was once severely injured in the groin while playing ice hockey without an athletic protector.

4)--Ren is extremely allergic to cats.

6)--Ren often spent his summer afternoons at a movie theater where his older sister worked. After watching the film "Coma" about fifty times, he developed a life-long fear of hospitals.

7)--The works of Michael Moorcock and Fritz Leiber have heavily influenced Ren's books.

10)--A little girl dressed in a red robe with her face hidden behind a black sash on Halloween gave Ren the inspiration for his Black Hats.