At what point will defining Riley become a matter of life or death? Is a legacy left by someone he's never met the only thing that can save him from himself?

Riley Johnson has always carried one label or another. He's the ranch kid, the bully, the jock, the closeted bisexual, the wild kid, the son of the town drunk. But these are all labels placed on him by others. Who is Riley Johnson really, in his own eyes?

Starting with the death of someone he loves, Riley's world beings to fall apart. As he tries to keep his head above water, he's faced with a choice. He can live down to the labels and be the Riley everyone believes him to be or he can search within himself and the hearts of those who care about him to find out who he really is and who he will someday become. 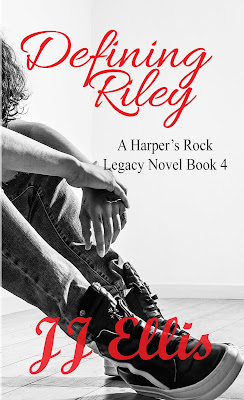 “Come on, sit down,” Johnny said motioning to the arm chair across from the couch. “I don’t know if you remember but when you were a little boy you guys used to come to Denver.”

“Before my mom died.”

“Yes. You and Addie were inseparable. You used to protect her from the neighborhood boy when he’d call her names.”

“And now I call her those same names, yet you’re still willing to take me in.”

“Your dad and I were best friends too. I was his protector. But then…” When Johnny paused just a moment too long, Riley’s curiosity got the best of him. “But then what?”

“Something happened that changed my life forever. I was no longer capable of protecting or being a friend or brother to anyone.”

Riley’s demeanor suddenly turned ice cold. “So, you’re saying you owe my father and taking care of me repays that debt?”

“No, what I’m saying is that you’re my nephew and I love you despite the sins of your father and since he no longer wants my protection and since I’m capable, I’m offering it to you.”

Riley couldn’t quite bring himself to look at his uncle so he set his gaze on the snag in his jeans. “But you don’t even know me.”

Johnny chuckled knowingly. “I know more than you think. Between when you guys stopped coming to Denver when you were six and when I moved home a few months ago, I was in almost daily contact with Uncle Joseph. I arranged for food baskets and grocery store gift cards, Angel tree nominations, and visits from social workers to make sure you were properly taken care of.”

Johnny shrugged and stood up. “I don’t know. I maybe couldn’t stand the thought of the little black-haired boy with sad eyes who used to crawl into my lap for story time going without. Maybe I missed my own child when her mother took her away. And maybe it was just time to help and be a part of the family again.”

“Thank you.” It was a whisper so soft that only way Johnny knew it was real was because he saw the gratitude in his nephew’s eyes.

One young man
One desperate decision

Being a teenager is hard enough, but when you have a diagnosis of depression and anxiety life can feel like it is caving in on you. When you add in a new awareness of your sexuality and falling in love for the first time, life can become almost too much to bear.

Ben Harper is determined to make it all work with the help of his best friend and new love, JC Croft. But when his inner demons conspire against him, can he come out on top or will he be crushed by the pressure?

A Promise to Sadie

Michael Croft, a sensitive, artistic teen, is trying to decipher his father's tragic and complicated legacy.Then, life presents Michael with the opportunity to help his childhood friend Sadie. He agrees, knowing he would do anything for the girl he loves.

When tragedy strikes the young couple, Michael makes a promise that beings to tear his life apart. But he has a guardian angel watching over him. Can his father's broken past help him face life as it should be? Or will Michael turn his back on the lessons of the past and sabotage his own peace?

Ben Croft and Adella Johnson come from two different worlds. Ben's a high school football star who likes the party girls. Adella is autistic and prefers the majesty of the horses she works with to the social awkwardness created by teen boys.

But for Ben, there's just something about the unpretentious, pretty blonde. So, when his usual charms don't work on her, he drops the act and gets real. They form a quick and powerful bond.

It seems almost from the beginning that the world is working hard to shred everything that ties them together. And it just might succeed when each is faced with a future they never saw coming.

JJ Ellis is first and foremost a mom to five kids, four girls and one boy, ranging in age from 6-22. After that, she is a physically limited wife, blogger and now an author. She holds a degree in Communication Studies (Public Relations) from the University of Nevada, Las Vegas but never thought she would choose writing as a career, especially at the age of 42. She once wanted to be a publicist in the entertainment industry, but never a writer. Then one day when she was in her mid-thirties she was going through what can only be described as an early 'midlife crisis' and ideas just started to come to her and she felt compelled to write them down. She finished her first book relatively quickly, but life got in the way and it took her eight years to revisit it and then publish her first novel. She can honestly say that now she is finally right where she wants to be.

JJ has been married to her college sweetheart (and romance novel hero) for twenty-one years and they reside in Casper, WY with their kids and one crazy mutt named Kreuger. She enjoys reading, writing, blogging, computing, and graphic design. She will try anything that will allow her creativity to be released.