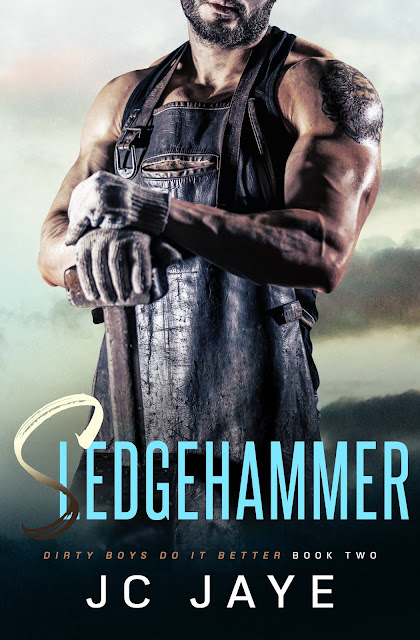 The man’s got a mighty hammer.
Joe “Sledge” Jaggard is the gold standard for imaginative homeowners craving the three B’s: Big, Bearded, and Brawny. But this hardworking hunk isn’t risking his rep with any messy, on-the-job hookups. No way—he’ll do his playing after hours, once he scrubs the sweat off. But when a luscious little kitten hires him for a summerlong project, he’s incurably bewitched.
Just his luck, she’s wearin’ the wrong man’s ring…
The lady’s got a mighty dilemma.
Becca Calhoun has inherited her gran’s overrun mansion, and is determined to restore its grandeur with Sledgehammer Inc.’s expertise. But concentrating on her To-Do List isn’t easy, not with a dirty demon singeing her six days a week with his hot green eyes. Dare the future bed-and-breakfast host follow her heart, and ditch control-freak fiancé for laid-back bad boy?
Maybe, but fate’s got other plans…
Contractor and client fall, and they fall hard. But a tumble off a tall ladder and a shocking diagnosis tests their trust and staying power, and the passionate pair learn that even the strongest bond isn’t immune to fissures.
**Adult content and language.
PreOrder: https://amzn.to/3xY5qA2
Goodreads: http://bit.ly/SledgehammerTBR

EXCERPT:
Whistling through clenched teeth, I pretended to play with corroding hardware,
while that light, flowery fragrance had me licking my chops, the sound
of soft, feminine breaths rendering me dizzy. The woman no doubt thought me
a rude fuck for not making eye contact, but no lie: drowning in those long-lashed
hazels was the last damned thing my dick and I needed.
Never have seen such stunning eyes, so doe-like and sexy.
Christ, did I dream about those beauties.
Pictured them slitted with pleasure, gazing up at me
from my pillow as I pressed my prick to creaming flesh,
and shoved it so fuckin’ deep into Kitten’s sweet, snug pussy that she—

Becca blew out a sigh, disrupting the filthy fantasy.

“Well, anyhoo… Just wanted to let you know I’ll be out in the yard
rassling with weeds the size of small children if you need me for anything.
It’s such a nice day, I figured I may as well get a little sun while I’m slaving.”

I grunted, praying the lady of the house planned
on scoring those rays in a body-shrouding muumuu, as
opposed to her usual getup of ass-cupping cutoffs and tit-hugging tees.

A full-face veil wouldn’t be a bad idea, either.

Planted like a stump in my shitkickers, I waited to hear the rickety
screen door slam. Instead of unoiled hinges, a pregnant silence
throbbed in my ears as Becca’s scent continued to weave its magic around
my unmoving bulk. A few seconds ticked by before, big surprise, she piped up again.
“Um. There’s a pitcher of fresh-brewed iced tea in the fridge.
I added a touch of mint from the garden to jazz it up.
Or there are sodas, if you’d rather. Also, I stocked up on a nice variety
of cold cuts and cheeses from Louie’s last night, so be sure to
dig in, Mr. Jaggard. The rolls are on the pantry counter.”

Mr. Jaggard? Arghhhh, again with that unsolicited name? I can’t fuckin’ take it.

Slowly, I spun to face my doom, praying a flap of tool belt canvas
was doing an adequate job in camouflaging what needed to be camouflaged.
Squinting across a length of peeling linoleum, I clocked the unholy form
of Rebecca Calhoun, her scrumptious bod propped against the archway opposite.
Fuck my life, I knew it. Daisy Dukes and a kid-sized tee…
Same cockjerking ensemble as usual. No goddamned muumuu in sight.

I ran a hand through my hair, trying not to gawk at vast expanses
of honey-gold skin, and the sweetest set of tits gracing God’s green Earth.
“Becca, come on… Enough with the ‘Mr. Jaggard’ crap.
I told you last week when you hired me I’m on a first-name basis
with my customers. And you were down with that, or so you said.
Hope so, ’cause that stuffy handle is my old man’s cuppa tea, not mine.”

Bravely, I forced myself to meet her eyes.

“The size of this project, I’m gonna be in your back pocket ʼtil
the end of August or beyond, so let’s ditch the formalities, huh?”

Unbidden, my glance flicked to the skimpy denim shrink-wrapped to Kitten’s thighs.

Back pocket? Man, I wish. Better still, how about front zipper?

PreOrder: https://amzn.to/3xY5qA2
Goodreads: http://bit.ly/SledgehammerTBR
MEET THE AUTHOR:
It was all Rhett and Scarlett's fault.
(Talkin' the grand staircase scene, people.)
Stung by the literary lovebug at a tender young age, JC has been devouring spicy romantic fiction ever since. Seriously... What could possibly be more delectable at the end of a rough day than a big, bad, moody male brought to his alphahole knees by a gorgeous, kick-ass, rock star of a heroine?
Well, besides a hefty goblet of vino and some imported Brie.
Dreaming up "I wish" fantasies while slogging through the woefully Rhett-scarce world, JC invites readers to indulge in decadent escape through her foulmouthed and passion-saturated tales.
You heard foulmouthed, right?
WEBSITE | AMAZON | FACEBOOK
INSTAGRAM | GOODREADS | TIKTOK
HOSTED BY: