Blog Tour for Nothing but Trouble by P. Dangelico

Nothing But Trouble by P. Dangelico
Release Date: March 26th

Nothing But Trouble, an all new standalone Contemporary Romance by
P. Dangelico

Reagan Reynolds...
Water polo god.
Owner of a face that belongs under Wikipedia’s definition of drop dead gorgeous.
Too charming for his own good.
But most importantly––the worst driver on the planet.
No, really, I’m pretty sure his blind nana taught him how to drive.
I had no idea who he was until he almost ran me over. And frankly, I kind of wish I still didn’t because then I wouldn’t have a sprained ankle to show for it. And my leg wouldn’t resemble a boa constrictor that’s swallowed a feral pig.
Yeah, it’s that bad.
I’ve spent years saving every penny I’ve ever earned to be able to transfer to Malibu University. And now my entire future––including my scholarship––is in jeopardy.
So I either accept the help he insists on giving me, or lose everything I’ve sacrificed for.
In the meantime, I’m going to ignore the fact that we’re becoming friends.
And I’m definitely going to pretend he’s not turning into the object of my…umm, dirty fantasies.
That’s not happening.
Not even a little.
Because the minute I clapped eyes on him I knew he was nothing but trouble. 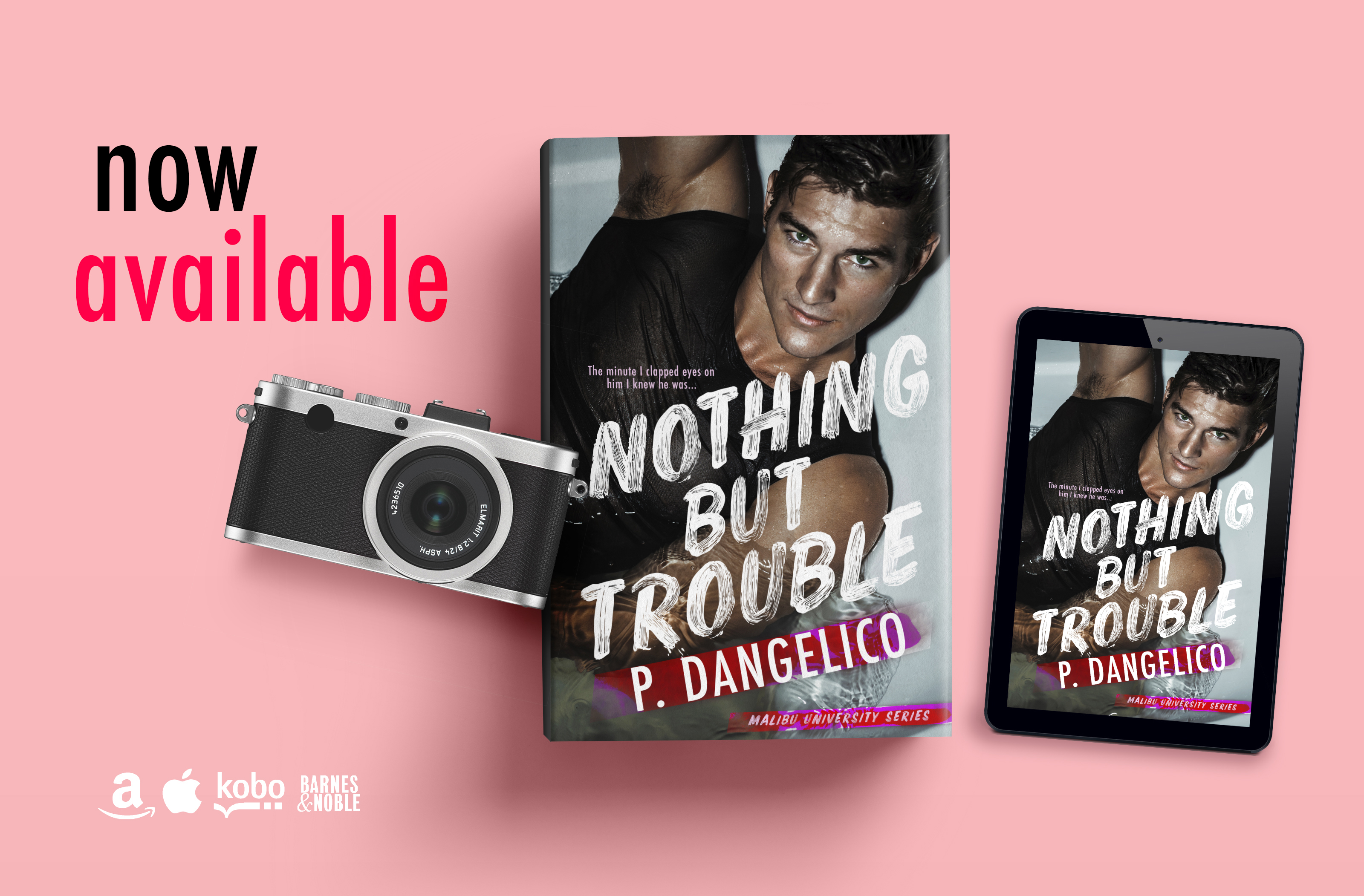 
Alice
A strong gust of hot air invades the car and Reagan’s hair gets ruffled. It’s been like this the last few weeks. Crazy hot winds picking up now and then. Mine is literally standing on end. I’m forced to hold it down with both hands.
“The Santa Anas,” he says as if reading my mind. I look over and find him smiling at me. “The hot wind.” He swirls his index finger.
I let go of my hair, close my eyes, and let it have its way with me. It stands instantly upright, like I stuck my finger in a socket. I’m sure I look like an idiot but it makes me laugh, a burst of pure joy emanating from my chest that can’t be contained any more than the wind can.
“Nice hair,” he mocks with a teasing smile.
“Thanks, Flipper.”
“I thought we established that it’s not a dolphin.”
“You’re not going to like me saying this, but you’re more dolphin than shark,” I happily point out. He’s always perky and upbeat, likes to socialize, loves all the attention. He’s a dolphin––whether he likes it or not.
He levels narrowed green vengeance on me, offset by a sly smile. “I’m the top of the food chain, babe. I’m all shark.”
“That’s adorable. Especially coming from someone that wears a swim cap like my nana used to wear. Except yours has those darling cinnamon buns over the ears. Like Princess Leia.”
He fights his amusement. “Those cinnamon buns are meant to protect my ears from all the rough, manly activity. And I’m tellin’ on you. I’m tellin’ all the guys you said that.”
The Jeep comes to an abrupt stop. Only then do I realize we’re parked in front of the apartment building where my study group is being held. Scanning the parking lot, I see people I recognize from class pouring out of a car.
My attention returns to Reagan and I find him watching me. His smile melts. His expression grows serious like he rarely ever is. I rake my hair down and get my fingers snagged on a few knots. Unfortunately I’m not the comb-carrying type.
Mental note: purchase comb. Crazy winds are afoot.
“Thank you for driving me.” I look for some sign of what’s going on in his mind and finding the door shut.
“What time should I pick you up?” He reaches out and I lean away, staring at his hand. “Chill, Bailey. You have a piece sticking up.”
“Oh…okay.” He’s trying to be helpful and I treat him like he’s a festering case of the bubonic plague. How embarrassing.
I lean in and he sets about gently brushing down each and every one of my stray hairs, so gently I can barely feel him picking apart the knots. I can feel his breath on my skin. Fresh from a shower, I can smell his shampoo. My scalp tingles and goose bumps break out on my forearms. Lord give me strength.

Review by Gia:
Nothing But Trouble is a good read.   Reagan is a water polo player for Malibu University.   Alice is a new transfer student to Malibu University.  She's has struggled to get there and has plans.   Their paths cross when Reagan pretty much hit her with his car.    She ends up with a sprained ankle.  Alice is feisty.    She doesn't want to take help from Reagan.   Reagan on the surface looks like a rich kids that has everything but he really has layers.  Reagan is a good guy.   I liked how Alice wasn't throwing herself all over Reagan.   Alice goes from fighting with Reagan to a nice friendship to more.   Reagan has a lot going on.  He has exceptions from his father and a brother who's struggling with demon.    There were parts that I felt I needed more information in.   The ending was good but I still wanted more.   I'm kind of hooked on the water polo guys and can't wait to read the next one.
4 Amazeballs Stars!

About P. Dangelico:
Dangelico loves romance in all forms, cuddly creatures (four legged and two), really bloody sexy pulp, the NY Jets (although she’s reconsidering after this season), and to while away the day at the barn (apparently she does her best thinking shoveling horse crap). What she’s not enamored with is referring to herself in the third person and social media so don’t expect her to get on Twitter anytime soon. Oh, and although she was born in Italy, she’s been Jersey Strong since she turned six.