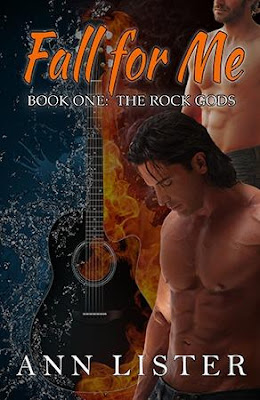 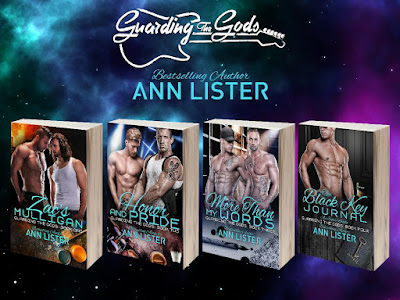 
About Ann Lister:
Ann Lister is a native New Englander currently living on the island of Martha’s Vineyard with her husband. She has pulled details from her years living in the New England area and uses many local settings and landmarks in her novels.
After graduating art school, marrying, and raising two daughters, she established her own video production company. Her nearly two decades working in video production included work within the music industry and won her a coveted Telly Award. Her ‘behind-the-scenes’ exposure to the music world and her love of rock music is the inspiration for her erotic rock star romances.
The Rock Gods series gave her Bestselling Author status on Amazon. Beyond The Music, Book 7 in the series, hit #1 in the Gay Erotica genre during the Pre-Order and held that spot for several weeks. This last book in The Rock Gods series launches the spin-off series, Guarding The Gods, which releases in early Summer of 2016.
Fall For Me, Book One in the series was a Finalist in the 2013 Rainbow Award. Each book in this series brings her two favorite elements together: musicians and the love between two men. These stories focus on what it truly means to love; love unconditionally, love without restrictions or labels, love without fear or judgment – to just simply love.
Connect with Ann here
Website
Stay up-to-date and subscribed to Ann's newsletter
https://www.annlister-author.com/
Author Amazon Page
Check out more Published Books M/F & LGBT by Erotic Romance Author Ann Lister
http://viewauthor.at/AnnLister
Goodreads
Add Ann's books for your next hot read
https://www.goodreads.com/author/show/519355.Ann_Lister
Facebook Page
Like Ann's Author page
fb.me/AuthorAnnLister
Twitter @AnnListerAuthor
Follow Ann on Twitter
https://twitter.com/AnnListerAuthor
Pinterest
Pin and share with Ann
https://uk.pinterest.com/rockgods7/
Instagram
Follow Ann on Instagram
https://www.instagram.com/rockgods7/
AllAuthor
Follow Ann on AllAuthor
http://allauthor.com/profile/authorannlister/

Interview With Ann Lister:
1. Can you tell us a little about your books?
I write erotic romance in both MM and MF genres. Most of my stories have a rock star theme, but I do have a few titles in print that have nothing to do with musicians. I'm known for The Rock Gods series, but I also have the Guarding The Gods series and Band of Brothers series, plus several stand-alone stories, as well.
2. What inspires you to write?
My inspiration comes from such varied sources around me. I can get inspired from the lyrics to a song, a photograph, or pieces of a conversation might I overhear, but mostly my stories come to me in vivid color in my dreams. The best example of that is Fall For Me, Book One in The Rock Gods series. The story line for that book came to me in a dream and it was so real, with complete conversations playing out for me between characters. When I woke up, I knew I had to write that story.

3. How many books have you written? Which is your favorite?
I currently have 17 titles in print and number 18 is releasing at the end of April. I also hope to have two other books released by the end of the year. As for which title is my favorite? I don't have a true favorite out of them all. Different books hold varied meanings for me. I love Fall For Me because it was Book One in a series I still can't shake from my system (meaning, I'm still adding to the collection). But, Beyond The Music has a character with a chronic illness which is close to my heart since I have the same disease. Then there is Fighting His Fire which deals with the subject of childhood sexual abuse and that was a powerful story for me to write since I am a survivor of childhood sexual abuse. So, all my stories are special to me for different reasons but I love them all. They each have a piece of my heart and soul in them.
4. Do you have a special time to write or how is your day structured?
I write 7 days a week but the hours during those days spent writing varies. Sometimes I'll spend ten hours in one day writing, another day I might only have two hours of actual writing time. It depends on where in the process of a project I am. If I'm working close to a deadline, then I'll be spending more hours writing and editing. My typical day starts out with a few hours spent in the morning on marketing, answering emails, and touching base with my PA on details in the business that require my attention. Afternoons are typically spent writing and that can go well into the night when I'm in “the zone.”
5. Do you have a favorite spot to write?
I enjoy having a view of something when I write that is also peaceful. In other words, a view of the highway would not put me into a good head space for writing. I like sunny spaces, so if it isn't too hot I'll sit on our lanai by the pool and write. My office overlooks our front lawn and I find it peaceful to watch the palm trees moving in the breeze. That helps me to write and this is also a sunny space in the afternoons, too.
6. For a reader who hasn't read your books yet, which book do you suggest they start with?
Well, if they enjoy MM Romance, then I would recommend they start with Fall For Me, Book One in The Rock Gods series. That will set them on a journey with two rock bands and the sexy musicians who play in each band. If they prefer MF, I would suggest Sheet Music: A Rock 'n' Roll Love Story, For All The Right Reasons, or Covered In Lace: The Lacey Sheridan Story. All of the stories I listed have a rock star theme in the story line.
7. If your fairy godmother waved her wand and whisked you away to the location of your choice, which place would you choose, and why?
I have several places I'd like to be transported to on a whim. The first spot would be the Pacific Northwest so I could spend some time with my first grand baby, and I'd bring the rest of my family so we could all spend time together there. I'd also love to visit the Greek island of Santorini. Ever since I saw the old (and naughty) 1982 movie with Daryl Hannah called Summer Lovers, I've always wanted to go to that gorgeous island. I'd also love to revisit Scotland, the land of my ancestors.
8. What are writing projects are you currently working on?
I have lots of writing projects in varied stages of completion right now which I am very excited about! Last year (2017) was a rough year for me, both personally and business related, and I wasn't able to release my usual 3 books. This year though, the flood gates of creativity have opened and I am looking at a very productive year ahead. I released Book Three in Guarding The Gods in February. Next up is the release of Book Four in Guarding The Gods, titled The Black Key Journal at the end of April. Around June, I hope to have Book Nine in The Rock Gods series released. This one is titled Reinventing Us and it is another Alex, Chase, and Danni story. Later in the year I want to get Book Three in Band of Brothers series released. Plus, I have also started writing a brand new series of short, erotic stories! So I have LOTS going on in 2018 and I'm so excited about ever single project!!
--------------