Release Blitz for Sell Your Soul by Rochelle Paige 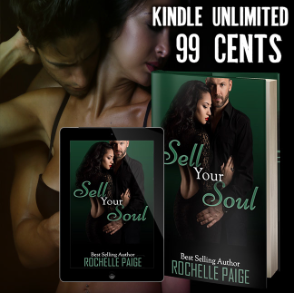 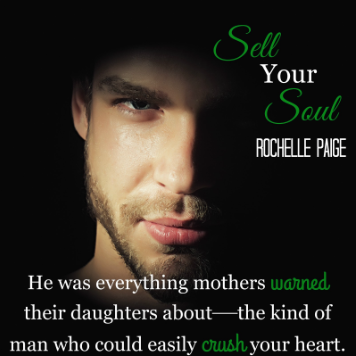 BLURB:
The last place Vaughn Westbrook expected to find himself was at a charity gala. But the dark path he’s walked since his discharge from the military led him into the upper echelons of society—where he hunts for the man behind a human trafficking ring.
Carissa Hastings lived a sheltered life in the lap of luxury. Forced to participate in a bachelorette auction, her parents expect the man of their choice to win a date with her.
Vaughn’s winning bid on Carissa was a tactical move, but logic is thrown out the window when he meets the innocent beauty.
Vaughn sold his soul long ago. There’s no way he’s going to let Carissa do the same.
Warning: This book has an alpha hero who doesn't see himself as a hero until he meets the woman who's meant to be his. If you like insta-love and hot sex, then this story is for you!
Please note: This is the third novella in the Body & Soul series, but it can be read as a standalone. Each book in the series features a different couple. 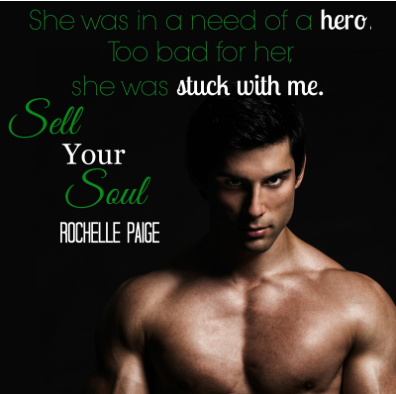 REVIEW
Sell Your Soul is book three in the Body & Soul series but it can be read as a standalone.  It's a short quick read.  I love short quick reads because most most of the time they can be read in one sitting.
Vaughn is an ex military guy who now works as a private contractor.  He's concurrently tracking a man dealing with human trafficking.  Carissa has been sheltered by her parents.  She's is shocked when she finds out her parents want her to participate in a charity bachelorette auction.  Vaughn is there to watch his target but when he sees Carissa he has to have her.   Carissa and Vaughn have an instant connection.   It's not all steamy romance, Carissa may be in danger.  She may be tied up somehow to the target Vaughn is going after and it's up to Vaughn and his team to figure it out and save her.   If you're looking for a quick read with and instant chemistry then this one is one you should check out.
4 Amazeballs Stars!!!
EXCERPT
Approaching and observing an enemy who was always surrounded by other people who were in the limelight—each with their own security detail—required a shit ton of finesse. Utilizing long-distance observation equipment only got me so far with Alexander Bellamy. I needed a valid reason for a closer approach, and I was determined to find it at this damn party. Almost two hours into it, and I still hadn’t managed to get within spitting distance. But from the way his attention suddenly shifted towards the stage when they announced the next socialite up for bidding, I had a feeling I might have found a way to catch his interest.
Switching my focus in the same direction, I quickly understood his fascination. The girl on the stage was hot, no doubt about it. The innocence shining from her eyes and the blush on her cheeks was an intriguing contradiction to the lushness of her lips and the curves outlined by her tight, black lace dress. When the woman at the microphone who was running the auction circled her finger at her and the girl swiveled on her black stilettos, I felt like I’d been punched in the solar plexus. My breath caught in my lungs at the sight of her bare back. All those inches of skin revealed as the dress dipped down to just above the cheeks of her ass—I didn’t want anyone else to enjoy the sight but me.
The sound of my target’s voice ringing out with the highest bid of the night filled me with horror as I pictured the beauty on the stage ending up dead like the girl in the alley. There was no way in hell I was going to let him get his hands on her and destroy the innocence shining from her eyes. I’d kill him before that happened—but I’d much prefer that waited until I confirmed there wasn’t anyone higher up in the trafficking ring than him. Until then, I just had to figure out a way to keep her out of Bellamy’s orbit. Starting with outbidding him for the date with her he was about to win. Lucky for me, wiping scum of the face of the planet paid well.
“A quarter of a million dollars.”
Very well, judging by the crowd’s gasp and the stunned look of surprise on the girl’s face. Strategically, it was either brilliant or the stupidest decision I’d ever made. But it was a go big or go home moment. Bellamy had deep pockets, and I didn’t want to waste time dicking around with outbidding each other. Making a statement, in a big way, was the most efficient route to avoiding all the back and forth. It also achieved two goals—it garnered me a date with the gorgeous girl on stage and ensured I ended up on Bellamy’s radar. If I’d read his interest right, my prey might very well end up coming to me.
I practically felt the death glare he was sending my way, and I couldn’t resist swiveling my head and flashing him a smug grin as the auctioneer counted down.
“Two hundred fifty thousand, going once. Two hundred fifty thousand, going twice. Sold!”
Bellamy’s eyes narrowed, promising retribution from me for stealing away his prize. My smile widened because I was pleased as fuck about my upcoming date—and because I knew it would piss Bellamy off even more. Reluctantly, I tore my gaze away from his and headed towards the stage, but all of my reluctance was swept away the moment I was looking at her again.
DON’T MISS OUT ON BOOK 1 OF THE BODY & SOUL SERIES
**Also available on Kindle Unlimited**
99 CENTS
BARE YOUR SOUL
Amazon US │ Amazon UK
OR BOOK 2
**Also available on Kindle Unlimited**
99 CENTS
SAVE YOUR SOUL
Amazon US │ Amazon UK

ABOUT ROCHELLE PAIGE
Rochelle Paige is an Amazon bestselling author. She absolutely adores reading. Her friends growing up used to tease her when she trailed after them, trying to read and walk at the same time. She loves stories with alpha males, sassy heroines, hot sex and happily ever afters. She is a bit of a genre hopper in both her reading and her writing. So far she's written books in several romance sub-genres including new adult, contemporary, paranormal and romantic suspense.
AUTHOR LINKS:
Facebook  │ Twitter │ Amazon │ Instagram │ Goodreads