"When one is Immortal, one should keep a low profile."

The Guild of Immortal of Women are a powerful band of Immortals who guard the mystical Tapestry for thousands of years. The Tapestry functions not only as a depository for the Immortals fondest memories, allowing them to take respite within their past, but it is also a prison for Immortals who defy the rules of the clan.
When the outlaw, Robert de Baudricourt, betrays the race by arranging the murder of Joan of Arc, a tear appears in the fabric of time and space. The magics holding the barrier between the dimensions has been deteriorating ever since.
The Guild must now race against time to save Joan, restore her sanity and restore the Tapestry before time and space bleed into each other. But Robert has his own plan. For him, the reign of The Guild of Women is over and vows to shift the guardianship of the Tapestry to himself by killing the women, impregnating an Immortal woman and siring an heir. Joan is his target. 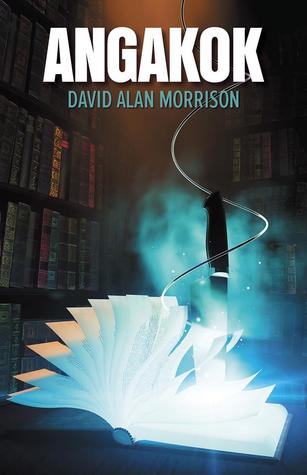 San Francisco, 2006: Dane barely remembers the night he died. He suffers from chronic insomnia, relieved by short bursts of fitful sleep filled with dreams of a mysterious red headed woman. Through her eyes, he watches as she murders random people, powerless to stop her.

Victoria remembers everything. She remembers her death, the journey through the darkness and the shining pedestal holding the Akashic Records. She remembers learning how she and Dane are not strangers; they share many lifetimes spanning back hundreds of years. In each of these lifetimes she was murdered and vows to take revenge on her killers.

When mystic Mrs. Jeremy discovers the connection between the two, she learns Dane must be the one to stop Victoria and balance the Karmic scales. Now Dane must race against time to prevent Victoria from killing his life partner, Jake, who’s next on her list. 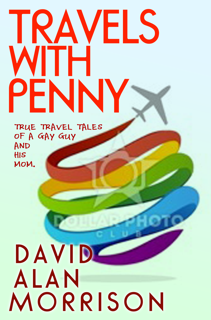 Two things flashed through my mind when I opened the door to the sex shop to find my mother standing in front of the display case talking to a tall salesman wearing a leather harness, jock strap and a dog collar. The first was, “Oh, crap!” The second was, “I hate it when Dad’s right.”

Thus begins David Alan Morrison’s hilarious memoir about the evolution of a family. Following the sudden death of his right-wing, conservative father, a middle-aged, liberal gay guy struggles with the idea of his own mortality by reminiscing about the quirky travel experiences he shared with his gregarious mother. Told through a combination of journal entries, random thoughts and interviews, TRAVELS WITH PENNY takes us on an adventure both funny and touching as David tries to make sense of seemingly random vacations that, somehow, weaved a new relationship with his estranged parents. As he and Penny travel through an Amsterdam hash bar, a New York gay theatre and the most conservative states in the USA, they learn that the events of their stormy past does not mean they must face the future in a broken relationship. They learn love trumps traditional notions of “family,” despite the pain of change and a society filled with anti-LGBT bias.

About David Alan Morrison:
David Alan Morrison received his B.A. in Deafness, Theatre, and Cultural Diversity from Fairhaven College and his M.A. in Theatre Arts from the University of Kentucky.  His plays have been produced in Louisville, Seattle, Lexington and Houston.
His writing spans the gambit of genres: magical realism (GUILD OF IMMORTAL WOMEN), memoir (TRAVELS WITH PENNY; OR, TRUE TRAVEL TALES OF A GAY GUY AND HIS MOM), young adult (RESCUING AWEN) and his latest release, the LGBT thriller ANGAKOK is now available on Kindle.
www.davidalanmorrison.com


Interview With David Alan Morrison:
LOL! What writer doesn’t want to brag about their books?  I currently have three books out:
Guild of Immortal Women, Angakok and Travels With Penny, or, True Travel Tales of a Gay Guy and His Mom.  Although they are all different genres, they are linked in an unusual way. GUILD is a brain-child of my sister, who had wanted to write the story for about 10 years.  In 2007, after my father died unexpectedly. In an effort to process the wild emotions that his death brought me, I wrote TRAVELS WITH PENNY.  Immediately after it hit the market, my sister told me she felt I hadn’t purged all my feelings and suggested I write something else.  I asked her about the story she had told me about ten years prior.  A series of nightly phone calls followed and, eventually, became GUILD OF IMMORTAL WOMEN.  ANGAKOK was rediscovered, thanks to WOMEN.  The story behind ANGAKOK: it was the first book I had ever written, finishing it the summer of 1991.  The manuscript was lost, or so I thought.  When I went into some old files to gather the drafts of WOMEN, I found ANGAKOK.
I’m one of those "bad writers".  I will walk through my daily life thinking about characters, situations, stories and the like until the pressure inside me builds up so badly I have to glue myself to a chair and pour my thoughts into the lap top.  I should really discipline myself to write daily, but I just don’t work that way.
Yes.  I love writing in the coffee shop near my apartment in Seattle.  Now that I moved to Portland, I’m in desperate need of another locally owned, independent coffee place.  I’m open to ideas.
No.  Absolutely not.  The only exception to this rule is Vivaldi’s "Four Seasons". But even Vivaldi is only played when necessary.  I need total quiet. Seriously - I get distracted by my cat.  Maybe it’s OCD….or ADHD.  All I can tell you is it annoys anyone within 2 city blocks.
GUILD.  It came from such a close collaboration with my sister during an emotional crisis for the entire family.  I love the book not only because it’s a great story, but because the path to its completion is so fondly held within me.
Working. I’m a workaholic - not out of a sense of duty, but rather my addiction to Scuba diving.  It’s an expensive hobby!
Daily. All the time.  Although I must admit, lately it hasn’t bothered me.  I stumbled across some great advice: When you hit writers block, go back to the story and do one of the following to your character: have them make love, find a treasure, or kill someone.  Then take it from there.  I don’t always use the results of the writing session, but it’s a hell of a lot of fun.
I’ve usually put a great deal of thought into the book before I write, so I don’t use an outline.  However, I’ve recently changed my ways.  I’m beginning to see the benefit of an outline - same thought process, less time wasted on drafts you’ll never use.
I work at a school and don’t like kids.
I’m trying my hand at a gay adventure romance about two guys who meet on a scuba diving trip gone awry.  I can’t tell if it’s going to be more "adventure", more "romance" or more "erotica".  Stay tuned...
Posted by Gia Guido at 9:00 AM