Release Blitz for Hide and Seek by Mary Burton 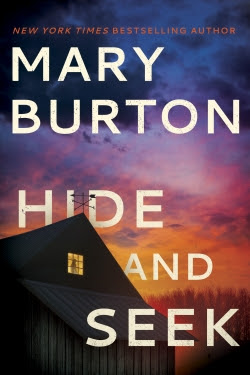 Special Agent Macy Crow is a survivor. After a vicious hit-and-run nearly kills her, she gets right back to work, and now she’s gunning for a spot on the FBI’s elite profiling team. As an audition, she offers to investigate the recently discovered bones of Tobi Turner, a high school girl who disappeared fifteen years ago.

While investigating with local sheriff Mike Nevada, a former colleague and onetime lover, Macy discovers a link between Tobi’s case and several others that occurred around the same time as her disappearance. As Macy interviews victims and examines old cases, she uncovers a sinister picture of a stalker who graduated to sexual assault—and then murder.

Macy and Nevada race to put this monster behind bars before he can come out of hiding. But the murderer’s had years to hone his skills, and soon Macy herself becomes a target. She’s no stranger to pain and terror, but will Macy’s first profiling case be her last?

REVIEW BY TABITHA:
I am a sucker for a good crime mystery and this one is just that. I haven't read anything from this author before now but I can safely say this will not be my last book I read. I am definitely intrigued by the characters of this book, Macy and Nevada and all the secondary characters as well. I can't wait to see what comes next with this new series. I was fully invested in solving this mystery and having a little romance with it just made it that much better.

About the Author: Mary Burton

New York Times and USA Today bestselling novelist Mary Burton is the highly praised author of twenty-six romance and suspense novels and five novellas. She lives in Virginia with her husband and three miniature dachshunds.

Connect with the Author