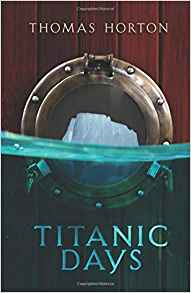 BLURB:A titillating look at 1990s Hollywood through the eyes of a jaded, voyeuristic narrator, TITANIC DAYS is a refreshingly objective erotic thriller, presented as an intricate series of vignettes that weave together the disparate lives of the story’s many players, all of whom find themselves on an irreversible collision course with self-discovery.Struggling actress Kari Morrow gets her big break when she’s called to serve as a background player for the epic film Titanic. On the gargantuan movie set, she meets Henry Frame, a handsome fellow extra, who initiates her into a dizzying world of sexual bondage and domination with life-changing results for both of them.A diverse—and perverse—cast of characters are pulled into the maelstrom of Kari and Henry’s perilous love affair: a millionaire call girl, a creepy stalker, a clueless hunk and his feminist girlfriend, a swinger couple, a zany drag queen and and a pair of police detectives who must determine whether a violent frenzy at the heart of the story can even be classified as a crime. As the inevitability of their fate becomes clear, each of them is faced with the same unshakable ultimatum: sink or swim.

Thomas Horton has enjoyed a long career as a writer, political activist, international marketing consultant, educator, emcee, bon vivant and scofflaw. A graduate of Rhodes College, the Alliance Française de Paris, and the University of Virginia, Thomas has traveled the world. He lives in Nashville, Tennessee, not far from his childhood home.
FACEBOOK PAGE:  http://facebook.com/titanicdaysTWITTER PAGE: http://twitter.com/thomashorton
Interview With Thomas Horton:

1.  Can you tell us a little about your books?

Titanic Days is my first published novel, and it's been a long time in the works.  I actually first wrote it back in 2002, and it was well received by everyone who test-read it, but publishers told me it was too "out there" because of its BDSM content.  When the “Fifty Shades” franchise brought kink into the mainstream, it was time to pull it off the shelf.  I re-edited it, and decided last Christmas I’d publish it myself.   I am currently seeking an agent to get the book wider exposure.
I’ve written dialogue for two feature films, Lwa: All Saints’ Eve and Beast of the Water.  I’ve also developed a television series which is in negotiations for development.  I am always writing something, and I plan to publish at least one new novel every year until I retire.
2. What inspires you to write?
It’s like breathing for me.  I can’t imagine not writing.  I’ve been doing it since I was five years old in some capacity or other.
When I set out to create long-form fiction for the first time, I decided to indulge a great fascination for human sexuality in all its variety. When I think about the course of human history, it amazes me how so many of us make life-altering choices in the name of fulfilling our desires, be it for a quick conquest, an affair, or a long, abiding love.  My books examine those choices, and the consequences on my characters' lives, whether fulfilling or disastrous.  In Titanic Days, many different effects of my characters' quests for passion play out.
The title I’m presently working on, Doing It Wrong, which I hope to have published before the end of this year, examines the current societal need to keep pushing the sexual envelope, and examines limits, boundaries and the true nature of passionate connection through the eyes of an impressionable couple who give in to peer pressure and become swingers.
3.  When did you know you wanted to write a book?
The first time I picked one up.  Books are magical things, and I always loved the idea that I could transport someone into a different world with just my words.  I had a big imagination as a child, telling stories of all kinds.  I’d bother my mother with my crazy tall tales, and when she was tired of hearing them, she told me to write them down.  My original writing started out as poems (and I still do write quite a lot of poetry), and then I began writing short stories in junior high school.  I would later work as a journalist.
After unexpectedly losing my magazine job in 2000, I decided the time had come to write a novel.  I wound up writing two, one of which was Titanic Days, and the other will likely never see the light of day— enough said about that!
4.  Do you have a special time to write or how is your day structured?
When I was initially writing Titanic Days, I treated it like a job.  I went to the public library, I sat in the reading room, I plugged in my computer, and I worked from 9AM to 5PM writing, every day.  On the rewrite and edit, of course, I didn’t have the luxury of writing full-time, as I was traveling a lot for my day job.  I worked as I could, but spent nearly every evening on it for several hours, until it was done.
5. Do you have a favorite spot to write?
The only thing between the initial composition and the rewrite and edit that changed was the venue— I now sit with my computer in my neightborhood bar instead of the library.  I can’t write at home, I’m actually distracted by the quiet.  When I’m out in a public place, with a jukebox, or boisterous people playing games or drinking, I can block it all out and I’m very productive.  I’m actually in a bar as I’m writing this.
6. Do you work with an outline, or just write?
I generally have some idea of where I want my story to go, as concerns the major plot points, but I don’t work from a written outline.  I let my characters speak.  They often reveal things to me that I didn’t know were going to happen, and that’s my favorite moment as a writer— when they surprise me.
7. If you had a superpower, what would it be?
I would wield the ability to manipulate time, and get as many do-overs as I want.
8.  What writing projects are you currently working on?
To stave off writer’s block, I keep multiple projects going on at once.  If I hit a wall on one, I just open a different one.  Currently in the works, in addition to Doing It Wrong, I have a romantic comedy called Into The Amazon, a black comedy about a hired killer called Snowball, a fictional memoir about a Hollywood actress whose son is a drag queen called More Than This, and about twenty other projects.  That’s not an exaggeration!