Review of Trouble by P.L. Jenkins 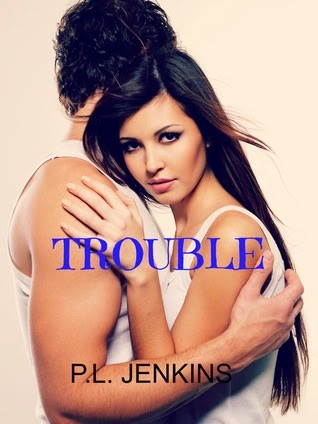 Synopsis:
Lannie Clark was the most popular girl in her high school. She had it all. Every guy was at her beck and call, and every girl wished they were her. Her senior year was going to be the most memorable senior year ever, as long as she had her bestie, Ashley, by her side. That was until she ran into Mr. Jones on the first day of Senior year. Nothing would ever be the same after their two worlds collided together. Will Lannie ever have her life back together? Would her world ever get turned back upright after meeting Mr. Jones? Find out as you're taken away with every turn of the page in Trouble!

Review by Gia:
I loved reading Trouble.  I pick the books I read differently then a lot of readers.  For this book, I wanted to read it based on the title.  The title reminds me of Taylor Swift's song Trouble and that made me want to read it.
Lannie Clark's name should be Trouble.  She is a hard as rocks girl.  She's the type of girl you don't want to mess with.  Her hard outer shell is just a facade for the real Lannie.   I loved her relationship with her best friend Ashley.  They are great best friends and partners in crime.
Mr. Jones is a new teacher at their High School.  He is 24 years old and super hot.  Lannie instantly likes him.
Mr. Jones, who Lannie calls J, shows up at some of the same frat parties that Lannie is at.   Any relationship between Lannie and J is just asking fro trouble but that doesn't stop them from trying.   She also gets texts from a mysterious guy named Brandon.   When she finally figures out who Brandon is, it's not very good.
J doesn't have much family.  His parent passed away then a few years later his brother passed away.   Lannie has a messed up family life.   Her family has a lot of things happen to them and there is a few crazy twists that involve her family.
You can't help but root for Lannie to get a happy ever after.   There were a few twists that had my going "OMG" and sometimes I was hoping that someone would stop the characters before they made a big mistake.   I think this might be the first book that I was actually talking to my kindle, telling the characters not to make things worse for them.
Trouble is a great read that will not disappoint you.  It's a definite one click.
5 Amazeballs Stars!!!!