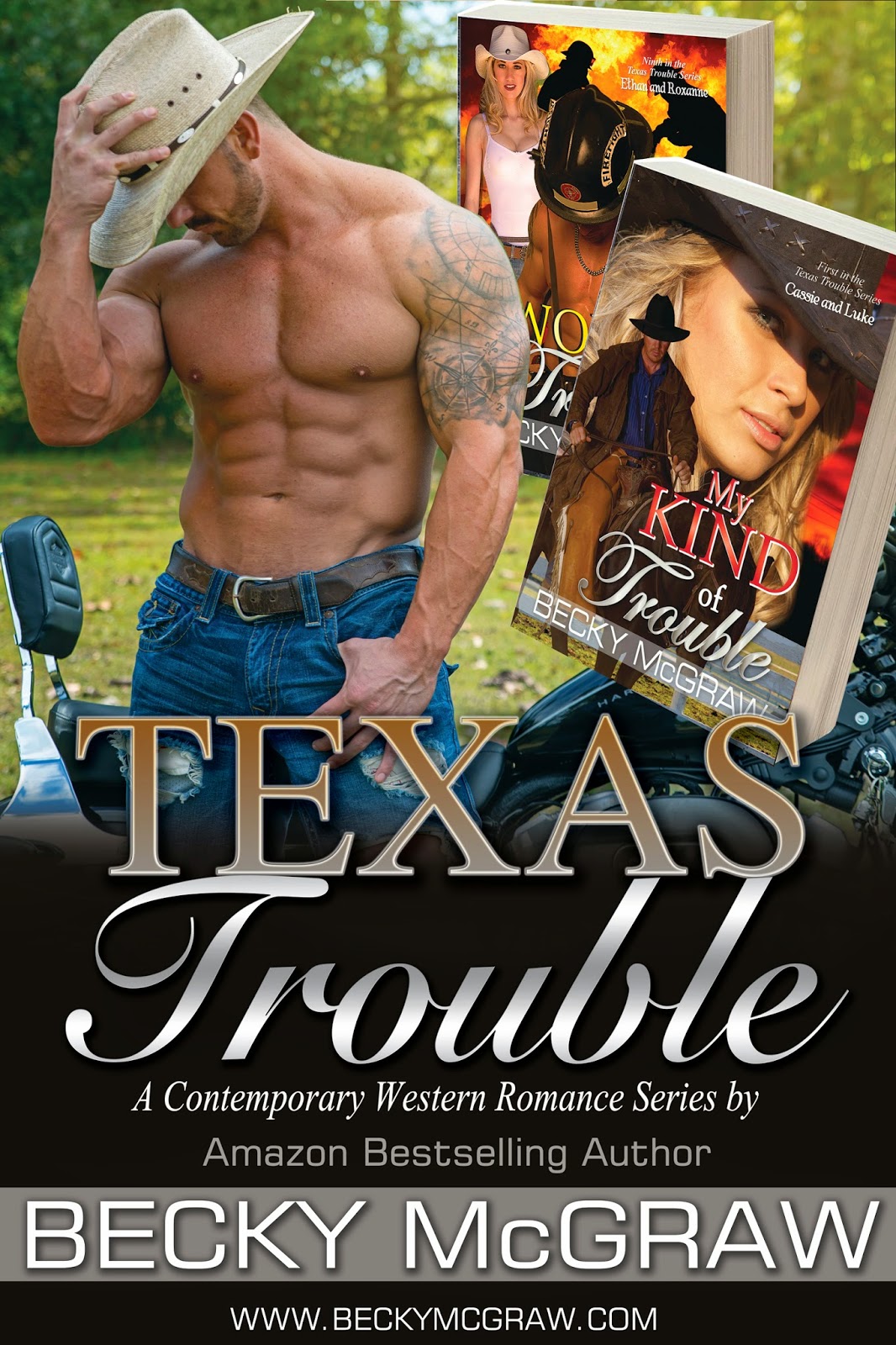 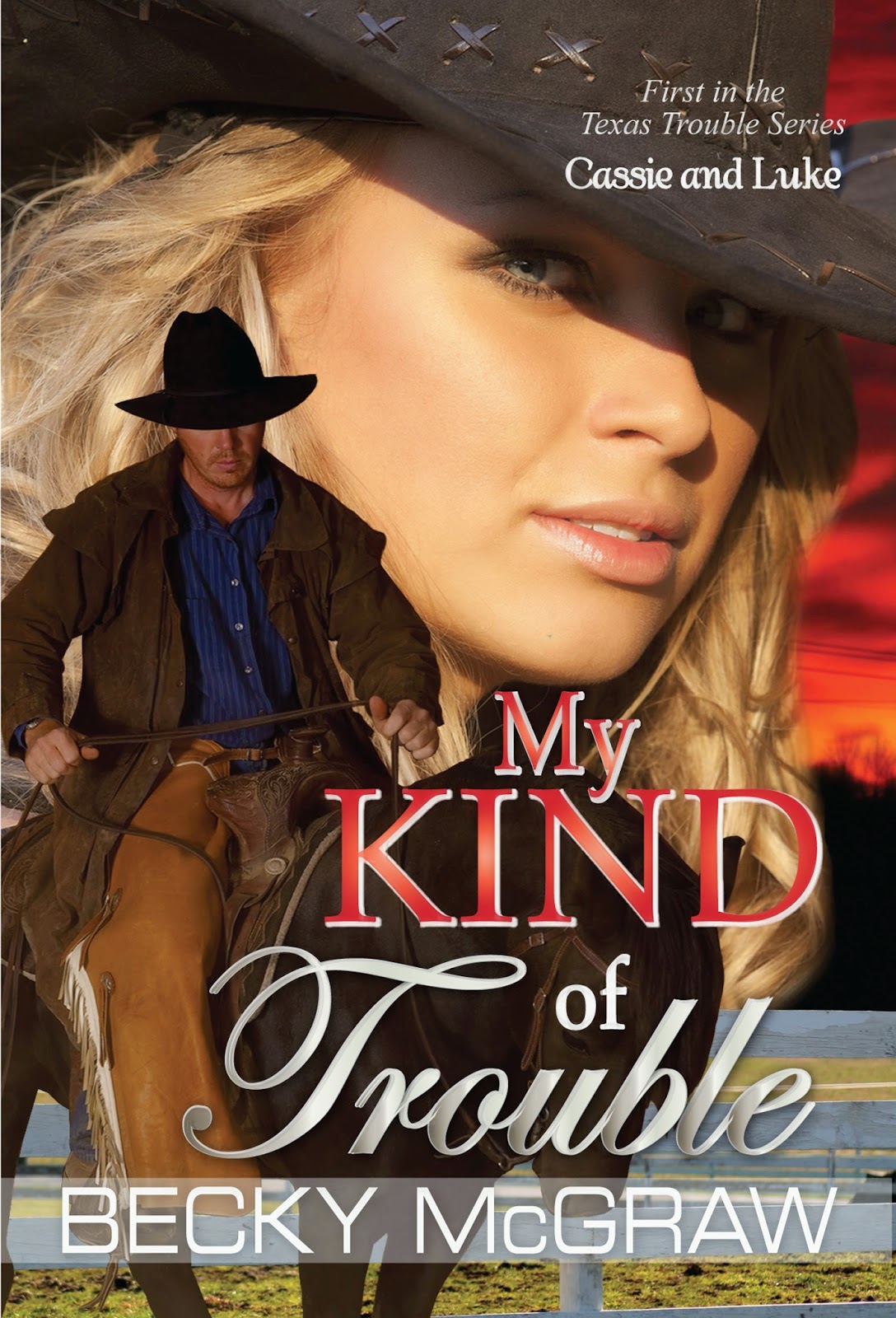 Cassie Bellamy swore she'd never go back to her hometown when she left Bowie, Texas ten years prior.  In that time she'd all but forgotten about the man who sent her running to Phoenix in the first place, bad boy Luke Matthews.  She had built a new life in Arizona, which included a successful real estate business, and a new fiancé.  The last thing she needed was to dredge up old memories by seeing him again.  But her daddy was hurt and needed her help at the ranch.  Her plan was to get her daddy on his feet as quickly as possible, and avoid Luke Matthews like the plague.

That plan went to hell fast when, on a nostalgic whim, she decided to drive her old pickup back to Bowie, instead of her BMW.  Bessie gave up the ghost five miles outside of Bowie, and the one person she wanted to avoid became her knight in brown khaki.  Cassie knew right then she was in big trouble.  The reformed bad boy was the Sheriff of Bowie now, and not only was he still hotter than the Texas sun, his anger toward her was too.

Luke Matthews had worked damned hard to change the way people of Bowie thought of him. He was no longer known as the bad boy son of the town's drunk, they called him Sheriff now. For ten years, Luke had been living on the right side of the law.  Although he was discreet about it, he also played hard to forget about the woman who'd given him the determination to better himself by leaving him ten years prior without a word.

His strategy had worked perfectly, until he came across a beat up pickup on the side of the road and decided to play good Samaritan.  That charitable act led him to the uncharitable owner of the illegally long legs sticking out from under the hood.  Cassie Bellamy was back in town and the beautiful blonde was just as sassy and stubborn as she always had been.

At first he's pissed, but then realizes he's just been presented with the prime opportunity to finally settle his mind and move on.  Luke is determined before he sees her beautiful backside on the way out of town, he will have his answers, even if it takes hog-tying her to get them.

"Crotchety old filly is like a drill sergeant.  Bosses me around something terrible," he grumbled and forked a piece of scrambled egg into his mouth.  "Kinda like those sponge baths though," he said around the egg and chuckled.

He would, she thought, and chuckled herself.  "She sounds like just what you need, old man.  Otherwise, you'd be running all over her."

"You're one to talk little girl.  That wimpy ex-fiancé of yours still in jail?"


"As far as I know.  Between your trespassing charge and mine for stalking, James will either have to drop the charges against Luke, or spend more time than him in jail.  I'm going to get a restraining order against him, once I get back to Phoen--" she realized what she had been about to say and stopped.


Her daddy's eyes narrowed.  There was dead silence between them for a minute or two, then he asked in a low even voice, "So you're going back?"

Cassie looked down at her hands.  "Yeah, for now.  I've got a lot of loose ends to tie up with the business, and I need to really think about where I want to live and what I want to do.  I made a snap decision to stay in Bowie because I was excited about the horse breeding thing..."

"You can still do that.  I have plenty of money, Cassie Bee, more than I could ever spend before I kick the bucket."

Cassie looked back at him, and emotion clogged her throat.  She cleared it then said, "I know Daddy, but if I do it, I want to do it on my own.  It will mean more that way.  But I'm not sure yet if that's what I want or not."  Carl's eyes misted, and Cassie reassured him, even though she knew it wasn't going to happen, "I still might do it Daddy, there's just a lot I need to deal with before I can make a decision.  A lot I need to work out."
<
Posted by Gia Guido at 8:00 AM