Jenna Jenson’s spent her life wondering why she’s different. The only people who may help her find out have been lost to her since their mother’s death. When she’s attacked by a man whose supernatural abilities supersede her own, she’s rescued by the devastatingly handsome demon king, Lucas Thaler. While she’s inexplicably drawn to him, powers she never knew she possessed are unleashed, leading her to discover she’s part of a new breed of immortals who can either save or destroy life.

After a war in his demon plane and home, Lucas has dedicated his life to battling Malum Inmortalis, rogue immortals whose sole purpose is to rule immortals and mortals alike. As fate would have it, the hunt for these vile creatures leads him to her. Instantly, he recognizes her. She’s the woman he’s been waiting for, for centuries, the woman he’s been dreaming of for centuries—his fated mate. 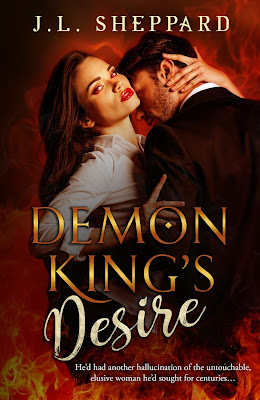 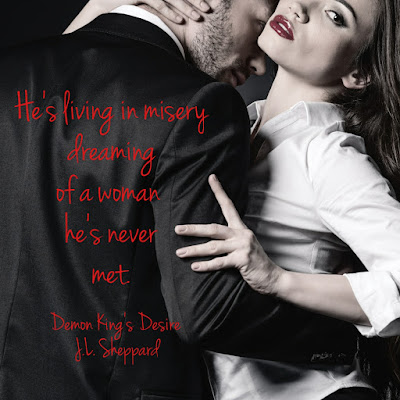 Lucas climbed the series of steps and knocked on his bedroom door.

He opened the door. His gaze landed on her, sitting on the bed, a towel wrapped around her. Clenching his jaw, he turned and dropped the bag he held in his grip on the floor. Then he closed his eyes hoping to wipe away the image of her in a towel. No use, it’d been seared in his mind since the night before.

“I’m sorry. I thought I heard you say come in.”

“What is it with you guys and towels? It’s not like I’m naked.”

“No, you aren’t, but Jenna, do you realize the effect you have on men?”

For a moment, he heard nothing, not even her breaths. Then she stood and neared. “Excuse me.”

Damn it. Maybe he shouldn’t have said it. Granted, if she didn’t know, she should. Maybe then, she would mind men seeing her in a towel. He hated the thought of anyone looking at her, at what was his. It was irrational, he knew, but he couldn’t help how he felt.

He did as told but kept his stare level, above her head.

He angled his head, stared into her eyes, and admired the dark-brown hue. Then because he couldn’t help himself, he lifted his hand and trailed it along the side of her face. He’d never felt anything so soft, silky. He shouldn’t have expected anything less. She was all beauty, the way she looked, walked, talked, even moved, and she deserved better than him, a demon, a monster.

“You’re so beautiful, Jenna. Any man would give his life to touch you once, just like this.”

Her breaths coming out in small gasps, she whispered, “I feel it. I hadn’t noticed it before, but I feel it now.”

Cupping her cheeks, he leaned into her so her mouth was millimeters from his. “What do you feel?” He asked even knowing she felt what he did because around her, it was hard to keep his emotions in check.

He couldn’t help himself then either. Gaze scanning her face, he leaned down and claimed her lips. When he parted his mouth, she parted hers. Then he slid his tongue inside, and she did the same, kissing him as softly as desperately.

Without losing hold of her mouth, he hooked an arm around her waist, tugged her toward him, and lifted her off her feet. Instantly, she wrapped her legs around him inching her towel higher. Her core’s warmth on his stomach, he groaned.

Take her. Claim her. Mark her. His demon, his instincts demanding what belonged to him. He fought them, fought to keep control.

He hadn’t told her she belonged to him, hadn’t told her what it meant, so he didn’t have a choice.
Using all the willpower he had, he pressed his forehead against hers, tore his mouth away, set her on her feet, and strode away. 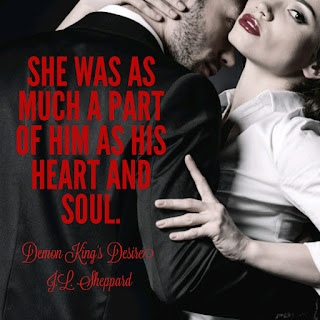 J.L. Sheppard was born and raised in South Florida where she still lives with her husband and son.

As a child, her greatest aspiration was to become a writer. She read often, kept a journal, and wrote countless poems. She attended Florida International University and graduated in 2008 with a Bachelors in Communications. During her senior year, she interned at NBC Miami, WTVJ. Following the internship, she was hired and worked in the News Department for three years.

It wasn’t until 2011 that she set her heart and mind into writing her first completed novel, Demon King’s Desire, which was published in January of 2013. 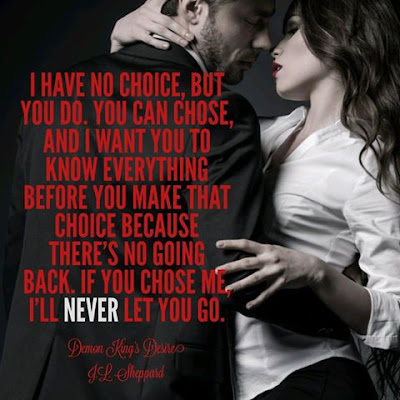