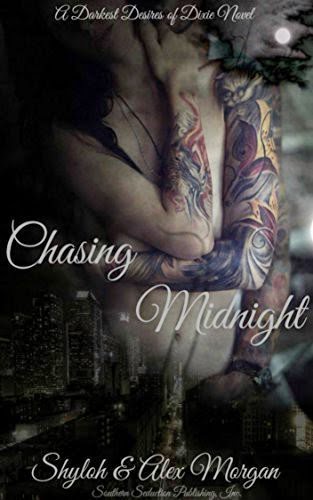 
Quinn Mason is a young Southern gentleman. Perhaps, gentleman is a stretch for how he lived his earlier years. He was the kid whose life seemed charmed, a popular athlete in high school who won a full scholarship. Life was on track for him until the death of his parents. In one terrible moment, Quinn went from having everything being everything for his young siblings. He left college, and used the money from his parent’s life insurance policy to buy a bar. The bar supported him and the kids, affording him the ability to give for them the life they were robbed of, even sending them to college.
Mhisery Bellemy has returned to Midnight, reluctantly. Her mother died, and she is left to take care of her drunken father, and the family cafe´. She had escaped the small town’s clutches as soon as she was of age, and swore never to return. Now, her siblings have turned to her, leaning heavily on her for help. The woman who got out of town and made a life she loves is now forced, by the bonds of family, and the weight of obligation, to return and give up what she had worked to build for herself.
These two are unlikely to cross paths, but chance throws them into the right place at the right time. Quinn’s brother is the catalyst that brings Mhisery into Quinn’s line of sight. And that’s all it took, one look and he knows he has to have her. The golden boy athlete is now drawn to the tall, tattooed woman stepping off the last bus into town.
Will Quinn ever have the woman he desires, and make her his own, or will she return to the life she loves far away from the small town of Midnight, and Quinn, or will she stay and make a life with the man she loves?
Chasing Midnight tells a story of love, friendship, and sacrifice. This talented duo, Shyloh & Alex Morgan, will rip your heart out and have you falling in love with the inhabitants of this quaint, quirky, town. Welcome to southern seduction, and the town of Midnight, where the Darkest Desires of Dixie become a reality. 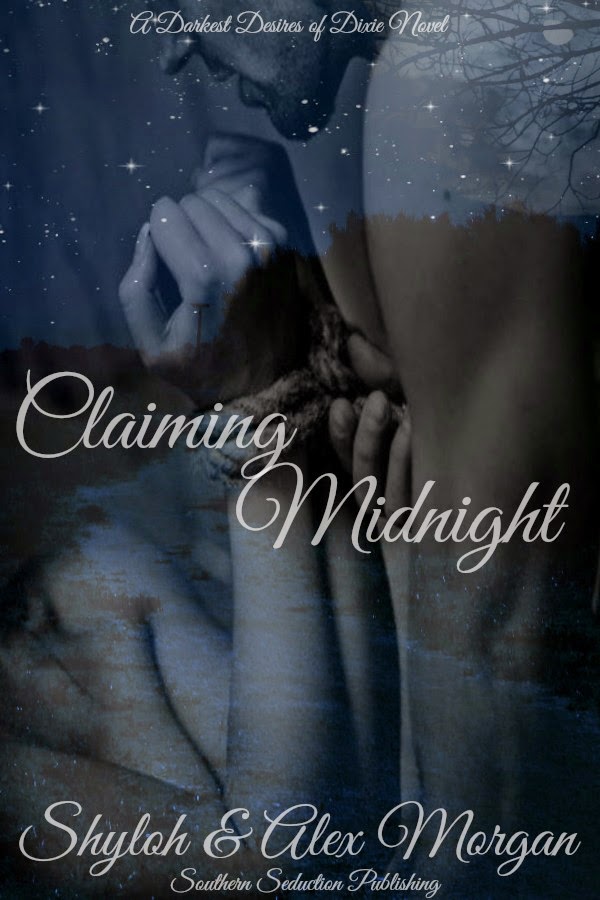 
Clayton Carter is a small town sheriff with a haunting past. He watched his brother murder his father when he was only fifteen. He escaped an alcoholic mother when he went to live his affluent aunt and uncle where he overcome his childhood tragedies to become a respected member of the community. Even though, some scars heal on the outside, they still remain on the soul and can affect every aspect of a person's life. His life was so chaotic as a child, now Clay has to have absolute control. He walks a very gray line between the black-and-white world of law enforcement.

Isabella was an extremely sheltered child who grew into a naive woman. A childhood catastrophe caused her parents to be exceedingly overprotective. Her grandmother bestowed the family bakery to her with hopes Isabella would learn to live — not just exist.

When an arsonist threatens Midnight, Clay is determined to solve the case and keep the residents of his hamlet safe. While questioning some of the locals, he meets Isabella. He has seen her a million times in the bakery but never noticed her. Clay is battling rumors in the town concerning his sexuality and decides Isabella could be a good cover. Clay only dates women outside of Midnight so no one will ever find out his fetishes run to the darker side.

While using Isabella as a cover, he begins to notice the woman beneath the frumpy clothes, and guileless outlook on life. Isabella begins to discover the heart of a man who only shows coldness to the outside world. When the arsonist targets Isabella, Clay has to fight his inner demons and face his feelings for her, all while trying to catch the fire-bug plaguing Midnight.


As Isabella becomes more disenchanted can she and Clay find a common ground between his controlling nature and her new-found autonomy?

About Shyloh and Alex Morgan:

Shyloh and Alex Morgan are a duet of authors who have written together for years. Both come from large families steeped in alpha males. Growing up in this environment allows them to truly grasp varying personalities and create a world of seduction that will completely consume a reader once they find them in a world the two have created.

Shyloh was born and raised in the south, and is a published author in her own right, with multiple titles to her credit. She comes from a large family in which she was the only female among all her brothers and cousins. She has a background in medicine working as a registered nurse before turning her attention to writing. She has several awards to her credit before she started embarking on this journey with Alex where have started showing readers that there is more than steamy weather in the south.

Alex was raised in a similar family and was surrounded by alpha males, giving them a unique understanding of various male personalities. Alex's ability to turn a phrase and make, not only the reader, but the leading female in the novel swoon, has given readers a true glimpse into southern charm, as well as, southern seduction.

Both reside in the rural south currently, and enjoy spending time with their family and friends while they each participate in the running of their individual family farms. They each love horse riding, quiet nights beneath the stars with a cold drink, and general country life. But when the two authors collide and collaborate they create a world in which demons, humans, shifters, and vampires alike take the reader on the emotional ride of a life time.

Their characters show various strong personalities, while demonstrating the inner turmoil that is faced within the plot. They are skilled at creating characters that are multifaceted, making the reader explore the range of emotion that each character feels. Welcome to the worlds of their creation where the men are strong, powerful, charming, funny, and perfectly imperfect. Where the women are strong of will and heart, with a determination to rival any the reader has ever read.

Welcome to the worlds of Shyloh and Alex Morgan.

Interview by Shyloh and Alex Morgan:

1) Can you tell us about yourselves?
Shyloh - I was born and raised in the south, and I am a published author in my own right, with multiple titles to my credit. I come from a large family in which I was the only female among my brothers and cousins. I have a background in medicine, working as a registered nurse, before turning my attention to writing. I have several awards to my credit before I started embarking on this journey with Alex. Alex was raised in a similar family and was surrounded by alpha males, giving them a unique understanding of various male personalities. Alex's ability to turn a phrase and make, not only the reader, but the leading female in the novel swoon, has given readers a true glimpse into southern charm, as well as, seduction.
2) Can you tell us a little about your books?
The Darkest Desires of Dixie takes place in a little town just outside Savannah, GA called Midnight.  The series revolves around the residents of this tiny town, their lives, falling in love and their struggles.  It’s a contemporary erotic romance, with emotion twists and turns.  First book Chasing Midnight was released September, 2nd 2014 with the second book, Claiming Midnight, slated for release February 1st, 2015
Hell’s Twelve is a paranormal erotic romance series that involves an elite force of demons that work as a demonic CIA.  They have mysteries to solve and we get to watch to see who they fall in love with.  The first book in this series, Commanding Hell is slated for release Fall of 2015
The Raiders of Romeo Regiment is a series based on the boys of a marine special forces unit.  This series is contemporary erotic romance.  The first book in this series, yet to be named is to be released 2016
The Regulators of Redemption is a series about watcher Angels that choose to plummet to earth eons ago to watch over humanity.  Their stories take you through each Regulator and their struggle for redemption.  This is paranormal erotic romance series. The first book in this series, Colt’s Redemption is to be released 2016
Temptation, Tennessee is a fictional town set in the mountains of East Tennessee.  It is home to both humans and supernatural though the humans know nothing of their supernatural neighbors.  This is an paranormal erotic romance series. The first book in this series, Reluctant Temptation is to be released 2016
Emergency Series (Untitled) This is an contemporary erotic romance series set around the emergency services in a small town in Mississippi. The first book in this series, yet to be named is to be released 2016
3) What is the process of co writing a book?  Do you each write certain parts?
We each have certain characters that we write but we collaborate on other aspects in the process.
4) Do you have a favorite character to write about?
Shyloh – In each character we develop is a part of us.  Some of them are easier to write than others.   We do have our favorites and for me, I guess Syra is one of my favorites.  She is Quinn’s younger sister and she has a little secret of her own.
Alex – At the moment, one of my favorite characters to write is Tiernan Carter.  Even though he is in prison for murder, I can relate to a lot of his head space.
5) Do you have any “odd” writing habits?
Certain characters must have certain music playing or they won’t ‘talk’.  We also, after a prior experience, edit every chapter as it is written.
6) Do you listen to music while you write?
Music is a huge influence to our writing.
7) Do you work with an outline, or just write?
We work with an outline.  We tried just writing and it was a huge disaster.

8) What's one random fact about yourself that you can share?
Shyloh – There are so many quirks about that it’s hard to name just one.  All body hair must be adequately shaved nightly or I can’t go to sleep.
Alex – I will not do food on a bone at all.  Ever.
Mutual quirks – Not drinking out the same glass twice.  Won’t share a drink with anyone, if you take a drink you can have it.  Everything has to smell like bleach.  Floors have to mopped every day.  Laundry gets done every day.  We are both extremely OCD.
9) What’s your favorite Holiday?
Shyloh – Christmas
Alex – Summer vacation
10) What project are you working on now?
We are currently on the second book of the Darkest Desires of Dixie series titled Claiming Midnight which is slated to be released Feb 1st, 2015.  While working on the first book of a paranormal series titled Hell’s Twelve.
Posted by Gia Guido at 9:00 AM