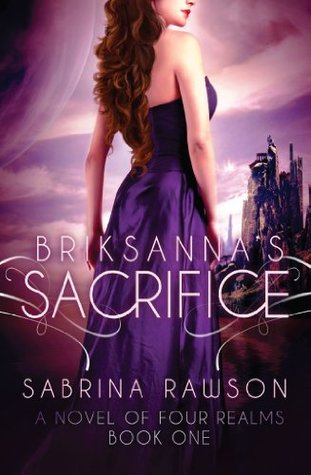 Briksanna's Sacrifice: A Novel of Four Realms: Book One

by Sabrina Rawson
Snyopsis:
Princess Briksanna has always known The Prophesy would catch up to her no matter how far she ran. Spending two thousand years hiding in the Earth Realm haunted by memories of heartache and pain in constant fear of capture by Lord Drakkoon, she finds herself unsure if she has the courage to be the person everyone needs her to be in order to stay one step ahead in a chase for her survival and of those she loves. So, when she discovers experiencing the feeling to freely love, she is pulled into a quest that will not only test the boundaries of her heart, but the life of her unborn son for the sake of saving the universe from total destruction.

Nathanial knows who he is on the Earth Realm and what kind of man he is for Princess Briksanna. But, what kind of man will she need him to be in order to fulfill The Prophesy she has spent the last two thousand years eluding? Tragedy has everyone travelling from the Earth Realm to the Second Realm of Skaldanna pushing his comfort zone knowing he has no knowledge of court expectations, but together with Briksanna and their family he believes he can succeed where all others have failed in dissolving the reign of Lord Drakkoon.

Can Briksanna and Nathanial find the undisputable faith in themselves to accomplish what needs to be done despite the sacrifices made to save their friends and family while establishing peace within the Second Realm?
Excerpt:
My love for you consumes me.  I wake up thinking of you, walk around my day thinking of you, and can't wait for the next moment when I can hold you in my arms again.  ~Nathanial 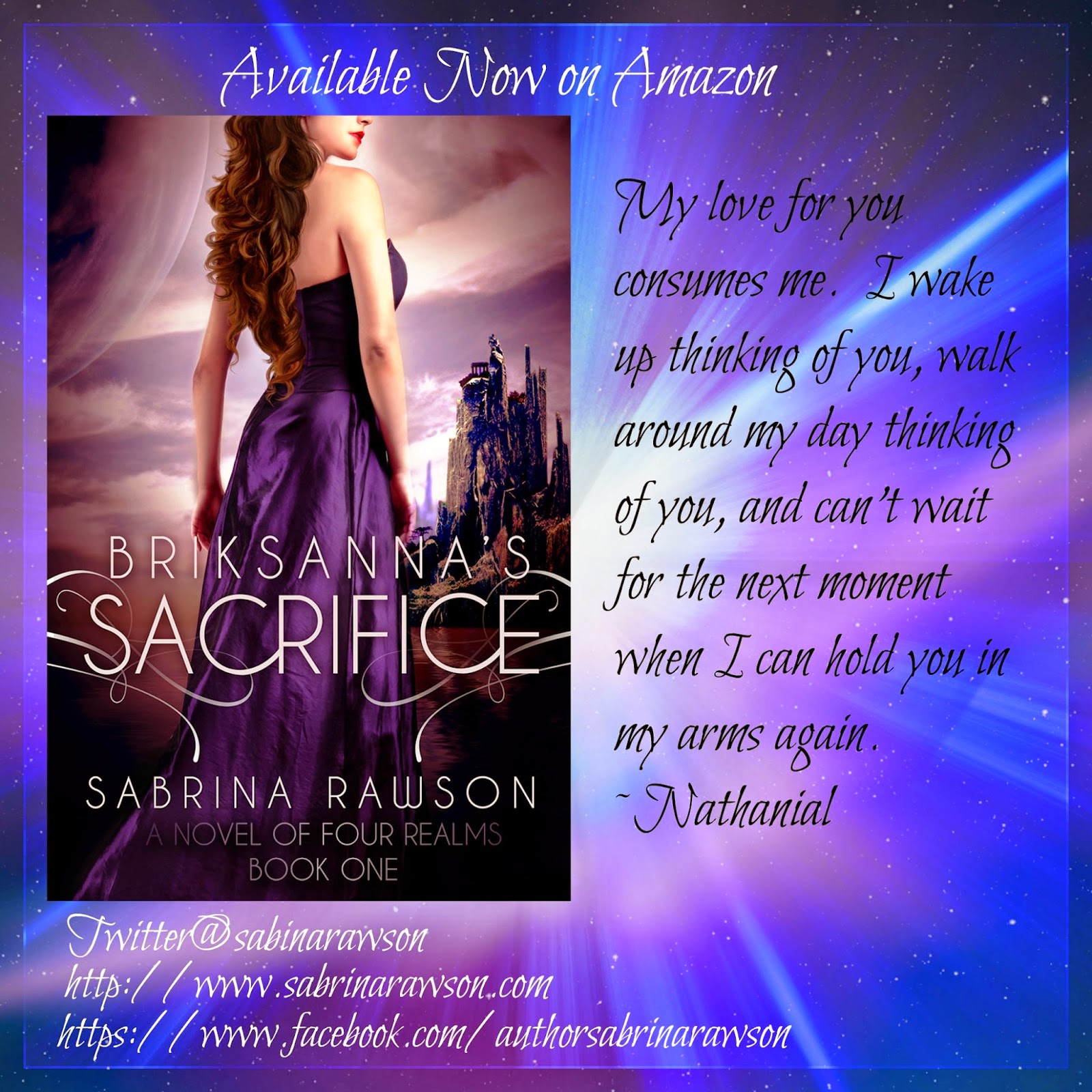 Katerina's Hope
by Sabrina Rawson
Synopsis:
Lady Katerina Kastekanos believes Striker Wells is the other half of her heart.  Assisting the High Council in talks of peace she struggles with deep rooted fears of abandonment, but can she be true to the man she has fallen in love with before her darkest secret can destroy any hope for a future with him? Before anyone can embark on the quest for the Firing Sword Katerina is kidnapped.
Striker Wells is son to Queen Briksanna and knowing Katerina is her best friend he does not feel ashamed of his love or his commitment to pledge his life to her.  Before their lives can begin Katerina is kidnapped.  Devastated, Striker searches for his lost love sworn not to stop until she is found.  The woman he finds is not the same woman when she was taken.  Will Striker be able to overcome his personal demons of abandonment to accept the man Katerina will need him to be for them to have a lifetime of happily ever after?

Excerpt:
May I never lose hope that the end result is greater than the pain of the inbetween.  With you in my heart and soul I can do all things unforgivable.. ~Katerina

About the Sabrina Rawson:

Although Sabrina Rawson had been physically writing for two years the ideas that conceived her first novel had been percolating in her mind for many years. In many ways she found life experiences had influenced her story although written in fantasy format.
Nelson Mandela's words inspired her:
"There is no passion to be found playing small - in settling for a life that is less than the one you are capable of living."
No truer words could have been said. After her first cancer battle four years ago, she was in the mindset to survive, get back to my swing of things. Problem was she couldn't. She wasn't the same person anymore. She relapsed by the end of the first year. She survived that experience exhausted and has had multiple tumors pop up ever since. To say her health presented a mental and physical challenge was putting it mildly.  She wanted to be more, do more, and was determined to reinvent herself along the way.
What she left behind after that first surgery, was her passion for life. Cancer didn’t take that away, she put buried it along with her drive and ambition. Her creative muse happily skipped right along with the rest of her dreams leaving her disconnected.  She had to rediscover herself and it was a slow personal process.  Four years post her first surgery and even if she had to do it all over again tomorrow, so what!  She refused to settle for a life less than what she could create for herself.
Sabrina lives in Sonoma County heart of the wine country of California enjoying life in the rural land happily married to a wonderful supportive husband. You can always find her reading a book, cooking a meal for her multitude of children or playing with her dog, Taylor.

Interview with  Sabrina Rawson:
1.    Can you tell us a little bit about yourself?
·    I am 43 years old and happily married.  I have five children all in adult hood with the youngest getting ready to graduate high school.  It was with my first cancer battle four years ago, I was in the mindset to survive, get back in the swing of things; house, work, children, volunteering. Problem was I physically couldn't. I wasn't the same person anymore and that really threw me for a loop.  I relapsed by the end of the first year and survived that experience exhausted with multiple tumors popping up ever since.  I decided I wanted to reinvent myself.  No, I needed to reinvent myself, because waiting for something else to happen in my life left me feeling out of control.  I felt the cancer had stolen my passion for life and I was taking it back.  I began to write a story never thinking it would go further than my computer.  I reached outside my comfort zone, met people from the literary world and next thing I knew I had published a piece with an eMag and self-published my first novel within a series of books.  With the second novel recently released and the third one in the works, I am ready to take on the world!

2.    What inspires you to write?
·    Survivors.  It doesn’t matter what type of adversity a person could be exposed to, they are my inspiration.  Personally it was two women who went through cancer treatment with me.  The both were terminal, but when we had first met they weren’t and it was at that time I said why not, I’ll give it a try.  When they became terminal I cried because I was battling and surviving and they were battling and losing.  One of them, Kim, she tells me to finish it, because there is nothing wrong with having the time to follow your dreams.  I spent two years writing my book in which six months was spent seeking professional advice and support along with stepping outside my comfort zone to achieve my dreams of publication.

3.    Where do you get your ideas?
·    From my imagination, the people around me or things I have seen or experienced.  I guess you can say I get my ideas from anything and everything I come in contact with.  The best source of my ideas is my dreams.  My characters talk to me in my dreams and when I am really in tuned with what I am writing, I can almost believe that I am a part of the story.

4.    Do you have a favorite spot to write?
·    The best place I write at is at my kitchen table.  We have a small house and there was never a plan for a desk area and writing in my lap has never held an appeal for me.  When I am really sick or stuck in the bed, I write in my room, but it never lasts long as I find writing upright is the best comfortable place for me to be.

5.    Do you have any “odd” writing habits?
·    Yes.  I listen to certain music when creatively writing and certain music when editing.  I laugh at myself as the creative writing music remains the same, Enya.  For editing, with my first book, I would listen to Lisa Gerrard, but when I attacked the second book I went with Lianne La Havas.  Love her music!

7.    When did you know you wanted to write a book?
·    Three years ago.  I started writing when I realized my cancer could come back anytime.  I guess it was an awakening of sorts for me.  I had just completed my second round of radiation and I began thinking about the things I wanted to accomplish in life and writing a story of my creation was one thing I wanted to do.

8.    Have you experienced writer's block?
·    Yes.  I waited six weeks before starting book two after publishing book one and that threw me for a loop.  I realized there were so many characters that had stories they wanted to tell that I had to corral them into waiting their turn.  It’s funny and haunting at the same time.  I was stuck because I had lost my momentum and became worried I couldn’t finish what I had originally intended to do.  After diligently picking away at certain scenes I began to find a rhythm that worked for me and the story.

9.    What's one random fact about yourself that you can share?
·    Cooking popcorn over the stove top—This is something my parents used to do with Jiffy Pop back in the 1970’s and in the 1980’s came the air popcorn machine followed with microwave popcorn.  It has only been the last 12 years I have made my popcorn over the stove top and my youngest two children love it.  When they are home and I make some it as comfort food for all of us.  It’s the best way to get them to open up with me whenever something is troubling them in their life.  In fact my 20 year old called me once and said, “Mom is it ok if I come over and you make some popcorn?”  I knew she needed her Momma.  Best feeling in the world!

10.    What are writing projects are you currently working on?
·    Well, I have book three I am working on in my current new adult urban fantasy series and I have another book that I am thinking of writing that would be different for me.  It is a contemporary romance.  I like the idea of writing something that isn’t fantasy.  I mean I love writing fantasy, but I love reading contemporary and historical fiction too.  I recently wrote a poem for the first time and that was a challenge because poetry is so outside my comfort zone.  I feel proud of what I accomplished with the poetry piece and hope that people will like it.