Synopsis:
I thought it was too late. I thought our story had already been written.

College sophomore Brooke Anderson thought she had it all − a loving family, her sexy high school sweetheart, a supportive, quick-witted best friend and dreams of being the next hotshot reporter for the Washington Post.

Fate had something else in mind when Brooke collided with the devastatingly handsome upperclassman, Rich Davis. Rich was cocky, conceited and arrogant. He was everything that Brooke didn’t want, but Rich never gave her the option. He had already made the choice to be, at the very least, her friend. Would Brooke accept this egotistical man’s friendship? Would she choose to want more? Would it be too late if she did?

Fast forward nearly ten years. Brooke’s life hadn’t played out quite as she had envisioned it. She was suffering from the heartbreaking loss of her mother, her high school sweetheart was long gone, and her dreams of the Washington Post had turned into a career at a small town paper. Brooke decided it was time to follow her dreams. If she couldn’t be happy in love, at least she could be happy in life.

Brooke’s dreams brought her to the lobby of the Washington Post where fate intervened once again as she collided with none other than the devastatingly handsome Rich Davis. As her potential employer, Rich now seemed off-limits. Brooke wanted her successful career more than a chance at love. But, was it really her choice to make, or was it beyond her control?

Maybe our story is, in fact, Unwritten … 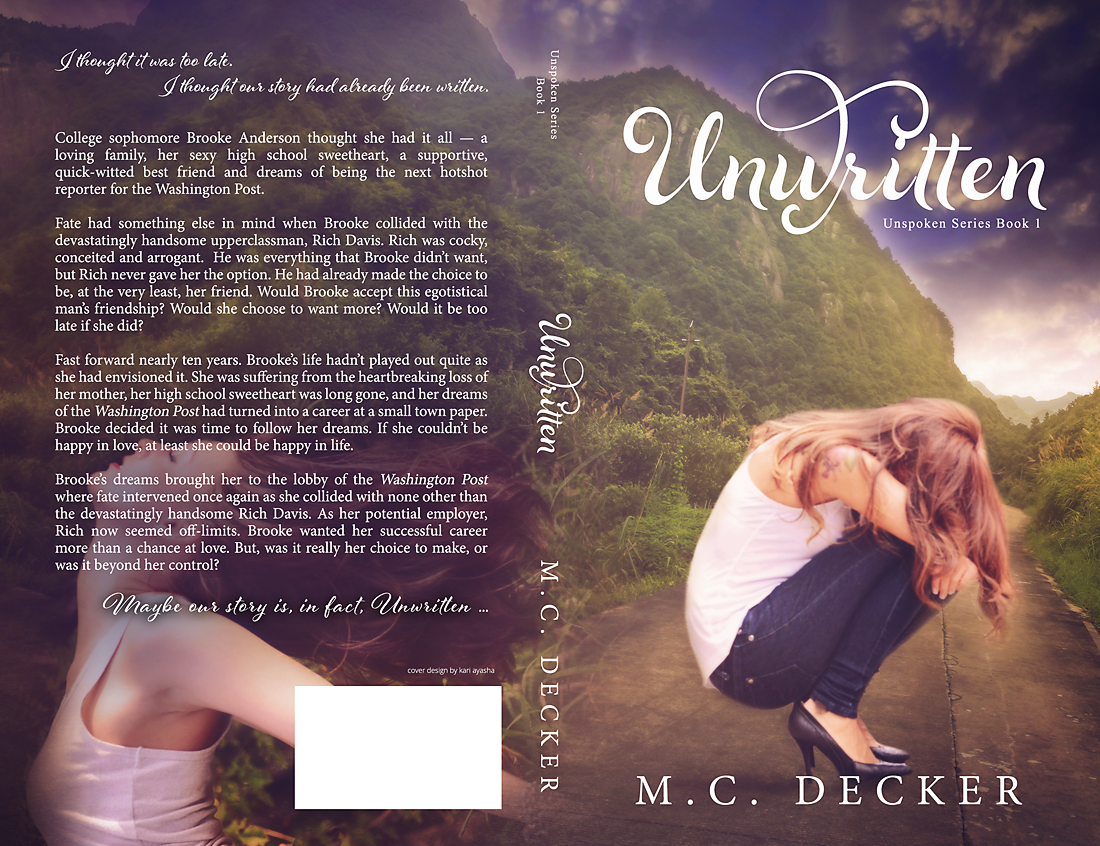 Prologue
October 2011
There was a limousine waiting for me when I exited the terminal at Dulles International Airport, just a little after daybreak. I’d only ridden in a limo once before and it had been with him. I never imagined a potential employer going to such extremes for an interviewee. First, I received first-class boarding passes and now a stretch Hummer with my very own driver. This was certainly a few hundred steps above my current, small-town, reporting gig.
Even while riding in the lap of luxury, I couldn’t shake the butterflies fighting in my stomach, or the incredibly sweaty palms that I kept wiping on my navy, pinstriped, pencil skirt. Thankfully, I decided to forgo breakfast before catching the red-eye out of Detroit. That would’ve made the butterfly situation a whole lot worse.
I could do this. I should have researched the editor, Davis, a bit more. Why didn’t I think of doing it two days earlier? Where was the brown paper bag when you needed it? They were always so readily available to the broken heroines in the kinky romance novels that I enjoyed reading.
After what seemed to be a short drive, the limo began to slow down in front of a large building with oversized, tinted glass windows. Both an American flag and the flag of Washington D.C. flanked the entrance of my destination, the home of the Washington Post. Before the car came to a stop, I wiped my sweaty palms one final time, pulled my compact from my purse, applied a light pink lip gloss and took a deep breath. Showtime!
My driver came around and escorted me from the car. For that I was thankful, as I’m not sure my nervous, wobbly legs could have survived my new ankle-strap, cream leather Louboutins that I purchased just for this interview. Sure, they may have cost me half an entire paycheck, but I wanted to look the part of an up-and-coming Washington reporter. My new shoes paired nicely with the vintage Valentino suit jacket that I found on clearance at my favorite consignment store and with my favorite go-to, pencil skirt.
I made my way up the front stairs, opened the heavy doors and headed toward the receptionist’s desk. There sat a young blonde with what appeared to be a fake rack and an even faker tan.
“Hi, I’m Brooke … Brooke Anderson. I’m here for an interview with Mr. Davis.”
The much-too-perky female handed me a visitor’s badge and directed me to the twelfth floor where I was to ask for Mr. Davis’s secretary, Caroline. I waited at the elevators for what seemed like an eternity before the doors opened and a group of people pressed forward.
A few suits exited the elevator on the sixth floor before the doors, pinging open on the twelfth floor, snapped me out of my nervous trance. I straightened my skirt and began to exit the elevator when I collided with all solid muscle and six feet three inches of him. And, that smell – why did this man smell so familiar? … I hadn’t smelled that perfect scent since … it’s then that I looked up and was greeted by those teal eyes. I’d never forget those eyes – those eyes that I never believed I would gaze into again. It was immediate déjà vu. I’d met him like this once before, only eleven years earlier. I had been a young and naïve student with so much to learn about life, love and heartache. I felt my heart begin to race and I feared that it might actually leap from my chest.
I thought it was too late for us. I thought our story had already been written. … 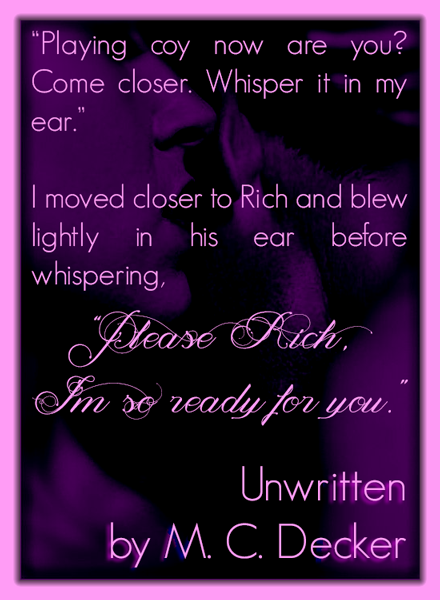 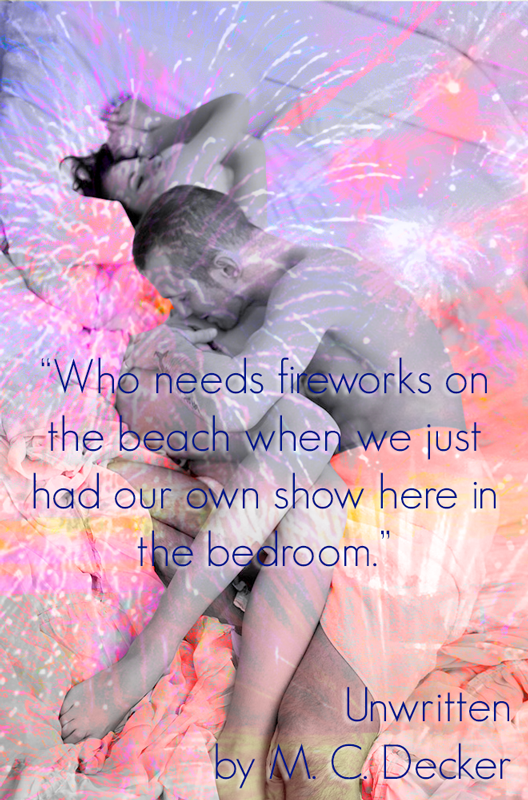 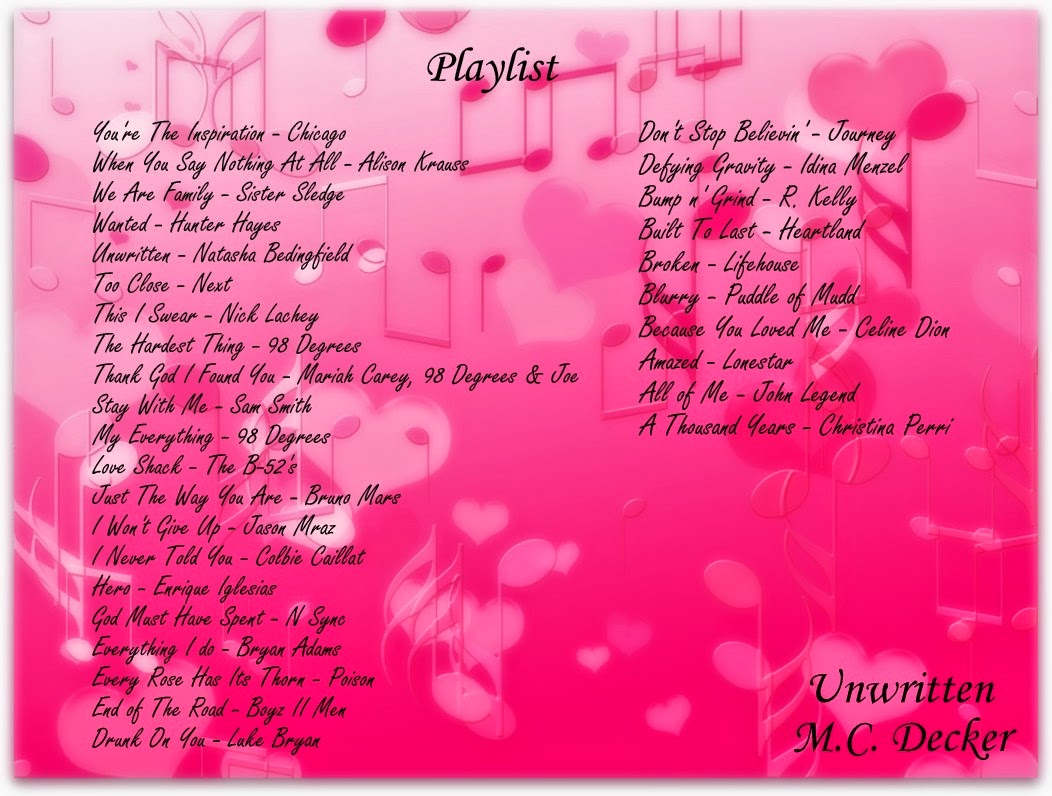 M.C. Decker is the author of the debut novel, Unwritten. She lives in a suburb of Flint, Michigan with her husband and spoiled-rotten Siamese cat, Simon. For the last decade, she has worked as a journalist for several community newspapers in Michigan’s Thumb region. She enjoys all things ‘80s and ‘90s pop culture: movies, boy bands, music and especially the color, hot pink. She also strictly lives by the motto, “Life is better in flip flops,” and is a diehard Detroit Tigers fan. You can e-mail her at author.mcdecker@yahoo.com. She would love to hear from you.

Interview with MC Decker:
1) Can you tell us a little about The Unspoken Series?
Currently, I have plans for 4.5 books in The Unspoken Series. The series will include a duet with the first two main characters, Brooke and Rich, (Unwritten and Unscripted), then I have plans for a novella in Rich's POV which for those who have read will take a look into the ten year gap in Unwritten. I hope to have both of those books out in 2015. Book three will focus on Brooke's best friend, Cassidy, and the fourth book will follow a character who was introduced briefly in Unwritten, but will play a much larger role in Unscripted. 2) Do you have any “odd” writing habits?
I suppose my oddest writing habit is that I write the best at night. I am an extreme night owl and I'd say that most of my writing is done between midnight and 3 a.m. I also am addicted to Sour Patch Kids and peach tea and my writing goes better if I have both in front of me!
3)  Do you listen to music while you write?
Yes, I do listen to music while I write. I have a playlist that I listen to for both Unwritten and Unscripted. Some of the songs are mentioned in the book while others are just songs that make me think of my characters. (I will include the graphic I have made for the Unwritten playlist). 4) When did you know you wanted to write a book?
I'm a journalist so I have always had a passion for writing. It wasn't until last fall, though, that I seriously considered writing fiction. My husband was the one who actually put the idea in my head. At first I looked at him like he was crazy, but then once I thought about it my story just kind of came to me. I outlined the entire plot in my head for about six weeks before I actually wrote anything down. 5) What's one random fact about yourself that you can share?
I am terrified of flying. The first time I flew, though, I crossed the Atlantic. I traveled to the British Isles on a study abroad trip. You know what they say ... Go big, or go home, right?
6) What's your favorite Holiday?
Thanksgiving
7) Can you pick one quote from Unwritten to share?
"You always said this was it for you -- your end game and your dream job. I'd be lying to myself and to you, if I didn't tell you that I came here and accepted this position, hoping that one day we'd find each other again."
8) If Unwritten was made into a movie, who would you want to cast as Brooke and Rich?
If Unwritten was made into a movie, I would cast Brant Daugherty as Rich and Ashley Greene as Brooke.
9) Do you have a release date for Unscripted (The Unspoken Series Book 2)?
I don't have an official release date yet for Unscripted by I'm hoping by late winter/early spring 2015.
10) What are writing projects are you currently working on?
I don't have any other writing projects at this time, I am focusing all of my efforts on getting Unscripted into my readers'  hands! Unwritten by MC DeckerPurchase links: Amazon US: http://amzn.to/1uITFqD Amazon UK: http://amzn.to/1tKWKJD Amazon CA: http://amzn.to/1ulZn3l Amazon AU: Unwritten (The Unspoken Series Book 1) eBook: M.C. Decker: Amazon.com.au: Kindle Store
Posted by Gia Guido at 9:14 AM