I’m a retired high school English teacher. A devourer of books growing up, my profession introduced me to writings and authors from times long past. Through my studies and teaching, I fell in love with the Ancient and Medieval Worlds. Now, I hope to inspire young readers and those Young-at-Heart to read more through my Tales and Legends for Reluctant Readers set in these worlds—Ancient Egypt, Medieval Wales, and coming soon, a hair-raising adventure through ancient worlds in search of 5 rare Phoenix Feathers.

All of my books come with Free study guides and/or extensive Back-of-the-Book materials.

My husband and I love to travel. In 2008, we spent three weeks in Egypt traveling by local train from one end of the country to the other; in 2014, we spent three weeks in the UK driving over 1700 miles through England, Wales, and Scotland; and in 2016, we spent a week in Iceland. We’ve also traveled to Mexico, Jamaica, and Aruba. Our next big adventure will be to Greece and Italy.

When I’m not writing or traveling, our 4 grandkids keep us busy. 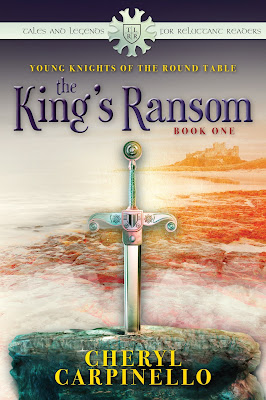 Gavin, Philip, and Bryan bravely vow to clear their friend of murder by taking the Knight’s Oath and embarking on individual quests to save The Wild Man. In the end, each one faces their fears and even death in their determination not to fail.
And one will have to disclose the biggest secret of all.
Join Gavin, Phillip, and Bryan on their quests and share the adventures that await them in the land of King Arthur and his Knights of the Round Table.

Gavin jumped to his feet and took off running, rounding the corner of the stable. Ahead was another, smaller building, an open door right in front. Not knowing where else to go, he dashed through the opening and into the dark. The foul smell almost did him in. Gagging, trying to hold his breath, his gaze swept the darkness.

“My swords! What could stink so bad?”

Seeing the stench’s source, he clapped a hand over his mouth to keep from throwing up. On the other side, lit only by a slit in the roof, lay the decaying body of a man. Unable to hold back any longer, he threw up. Still spitting and gagging, he looked again through watering eyes at the man. Wisps of white hair stuck out of the skull. It was impossible to tell who he had been. Some flesh remained, but only enough to discern that the figure was indeed a man.

Shouts outside brought him out of his stupor. He looked around, but saw no way out other than the door he’d come through.

“What I wouldn’t give to be back home,” he said. “I could die here. No one will believe the thief is a prince of Pembroke!” His stomach still queasy, Gavin searched the darkness for a hiding place. He moved further toward the back of the room and then froze; his heart skipped several beats.

Two lights shone in a dark corner. A quiet voice spoke to him. “Here! Come here! I’ll halp you.”

A small figure stepped out of the darkened corner, his frail hand extended. Ragged white hair like that clinging to the corpse sat atop the apparition’s head. Gavin backed away, but the ghost followed. “Who...what...who are you?” he croaked.