Review for I'm Holding On by Scarlet Wolfe 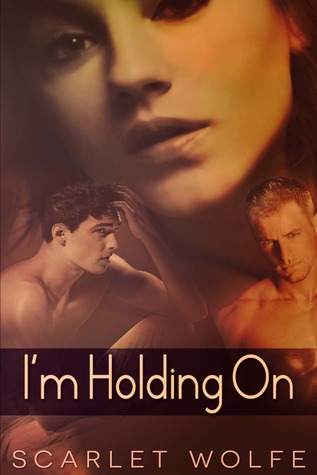 Synopsis:
Drew Clark is the manager of his parents’ busy coffee shop, Clark’s Coffee Grind in Portland, Oregon. Brynlee Townsend, a pastry chef, rents space from Clark’s to run her business. Drew and Brynlee instantly connect and become best friends. Two years pass, and both have fallen hard for the other but could never get the nerve to express their true feelings for fear of damaging their friendship.

Ian Williams returns to Portland after graduating from Columbia law school in New York. He crosses paths with Brynlee, and they have an immediate attraction to each other.
Since Brynlee’s tired of waiting around on Drew to show a romantic interest in her, she agrees to go out with Ian. Sparks fly and an intense relationship forms quickly.

When Drew discovers that Brynlee is dating, he becomes jealous and finally gets the nerve to express to her his strong feelings. The news from Drew and a big twist leave Brynlee shocked and unsure if she can trust that his feelings are genuine. She’s falling for Ian fast, but he’s never been in love and is honest with her that he’s been a player in the past. She’s torn, unable to choose, so she begins seeing both of them.

Drew’s determined to show Brynlee they have chemistry while Ian fights to show her that along with their intense physical connection, he can be a good friend. Hot dates occur, passion builds and tempers flare as both men become possessive and desperate to win her over.

The more time Brynlee spends with them, the harder it becomes for her to make a decision. Ultimately, who will she give her heart to? Will the man Brynlee chooses want it after all they’ve been through?

For mature audiences due to explicit sexual scenes and language.

Review by Gia:
I'm Holding On is an amazing read. It's a drop everything and read now book. It has a love triangle between Brynlee, Drew, and Ian.  I much as I want love triangles to end with all three are happy you know in the end that only two will be happy.  What makes this love triangle stand out from all the rest that this story is told in three POVs.  We get Brynlee, Drew, and Ian's side of the story.  It's absolutely fantastic.  I loved that we get everyone prescptives in one book.
The characters are wonderfully written, I instantly fell in love with them.  Ian and Drew are the perfect boyfriends.  When reading my heart ached for Brynlee because I knew she would have to pick one of these beautiful charcter to more forward with.  Brynlee is a strong charcter.  In my eyes what made her charceter really great was that even though she was dating both Drew and Ian she was not having sex with either of them until she decided who she really loved.
I won't tell you who she ended up with and the end but you will noit be able to help yourself from feeling happey for them and sad for who she didn't pick.  I honestly didn't know eho she would pick until she actually pick one.
I'm Holding On is a great read.  I would definitely recommend it.
5 Amzeballs Stars!!

About Scarlet Wolfe:
Scarlet Wolfe began writing in January of 2013 as a way to distract and heal from some of the grief she was dealing with after the death of her teenage son.
She instantly fell in love with bringing characters to life. Releasing contemporary romance throughout 2013, she has already branched out this year, releasing erotica and teen.
When not writing, Scarlet enjoys reading on the Kindle app, baking, being crafty and spending time with her friends and family.