Author Bio: A.C. Wilson
A.C. Wilson lives in Abilene, Kansas with her husband, two sons, and their chocolate lab. She loves to be outdoors, playing with her boys and absolutely loves to write.
Her first two books were historical regency romances, Rockwell’s Lady and To Right A Wrong. The Black Hills Series came from her mother’s idea to use Hot Springs, South Dakota as a home town for the Johnson family. Everything about the Black Hills is enchantingly rugged and of course, there are cowboys!
Check out her young adult contemporary romantic series. Black Hills Angel (Book 1), Black Hills Blessing (Book 2 releasing in April) and Black Hills Rebel (Book 3 releasing in August). 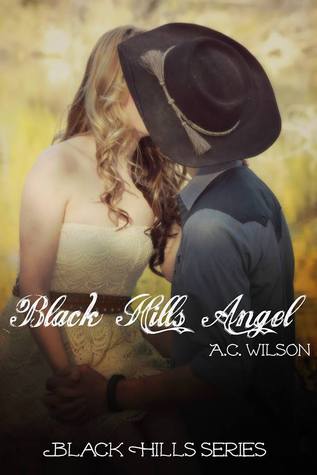 ANGELS. Do they exist? Do they offer comfort? Do they clear the way to good things to come? Do you know who they are?

Andy Martin is a single mother to a beautiful baby girl, Harper. It's been tough. Her family wants to know the father's name. She promised never to say. Her family wants her to give up the child. She can't do that either. So Andy is cast out from her home and forced to move to Rapid City, South Dakota to live with her ailing grandmother. Darker forces still at work, her grandmother dies and Andy is forced to go her future alone. Mother. Father. Provider. It all starts to crumble.

Matt Johnson has lived in South Dakota his entire life. Growing up near Hot Springs on his family's ranch, Matt knows the power of family and loyalty. Waking up to a screaming baby and crying woman in the hallway outside his friend's apartment was not exactly how he thought he'd test those beliefs. As soon as he meets Andy Martin, there is a crazy connection he just cannot deny. Something tells him to not let go.

If you found your own angel, would you let them go? Could you accept that even angels have their secrets?

Andy couldn't define the chaos going on inside her. She felt like she was floating, but her body felt heavy. Her breath was locked in her throat while her breasts felt achy. The flesh along her stomach came alive with his breath on her fingers. Their banter had started a fire that licked to her very core. The intensity of the feelings left her panicked and unbelievably turned on.
Shit! You cannot go there, Andy! You cannot! You swore this would never happen again!
She swallowed hard and stepped back. She thought she saw confusion in his eyes, but it vanished with something very close to relief. It was difficult not to notice the fast pace with which his chest rose and fell. Matt was as amped up as she was. She gave a weak smile.
"I am so sorry. I am a mess, obviously and," Andy shrugged her shoulders, "I have no idea what I am doing." She couldn't retreat far without bumping into the back of the couch. The countertop island was behind Matt as he watched her carefully. She swallowed.
"I can honestly say I understand that feeling. I am a bit out of my depth here too." Matt raised his own shoulders mimicking the same gesture she had made a moment before. His blue eyes smiled gently at her.

"We have all night." His eyes focused on hers as he felt the mattress shift under his weight. Andy pressed her lips together and her hand cupped the side of his jaw as he leaned closer.
"We've been dancing around this for quite some time." Her fingers inched up his neck and burrowed into his hair. Gently, but insistently, Andy pulled his face closer to hers. "I want you more than I've wanted anyone in my life. I need you." The last words were punctuated by the nip of her teeth across his bottom lip and then she pressed her mouth against his. His entire body leapt at the words she spoke.

Garrett Johnson is a sexy cowboy from South Dakota, who curbs any woman’s need for commitment. His relationships are all about the fun; sex, drinking, and companionship. If she wants more from him, the game is over and he moves on. It has been this way since he left his hometown of Hot Springs after graduation.
Garrett is looking for something, anything that might take away the monotonous feeling of traveling down the same doomed path. An argument over the future of his family’s ranch sends him out into the middle of a snowstorm only to be rescued by a dark-haired, golden eyed siren. A captivating woman who could change the game altogether!
Rayne Randall left South Dakota fifteen years year earlier in anger and grief at the tragic loss of her mother. She has only now returned after the death of her estranged father. There is more pain and destruction in this place than any other. She has been cursed to live each day with the knowledge that her father killed her mother.
Rayne wants nothing to do with her family’s ranch. There are no ties here worth remembering! So why did she have to meet a sinfully handsome cowboy who inspired her to dig for the truth? Assuming the job as her foreman and her friend, Rayne acknowledges that Garrett Johnson just might be the blessing she had never thought would come.

Garrett felt the full weight of her gaze. Hungry. Hot. Fucking sexy! He hadn’t met a woman yet who wanted a no strings attached relationship. He certainly had never met a woman as strikingly beautiful as Rayne Randall either.
What would it cost him to get involved with a woman like this? He was pretty sure it would do more than physical damage to him. He was drawn instantaneously to her golden eyes, but the rest of the package was beautiful too. Her long dark hair swept in unruly waves away from her face. Her body was fit, slightly muscular as if she did manual labor every day. He had even noticed that she was average height, just a few inches shorter than he. Garrett swallowed hard. It was impossible not to imagine how perfectly she would fit against his larger frame and how soft her curves would be. He felt himself tightening in response to his ever deepening attraction to Rayne.

How could someone she just met be so in tune to her mind? The Cowboy had her melting into his hands and soon she’d be begging him to do passionate things to her body. Hell, she’d beg to do unspeakable things to his! Garrett lowered himself to his knees and instinctively Rayne’s fingers interlaced in his dark hair. He pressed his lips against her stomach and groaned as her finger nails scraped his scalp. Feeling that exquisite heat so close to the spot she truly wanted him, Rayne felt her core flex and clench in demand.
Holy mother of all that was good! Garrett’s tongue laved just above her waistband of her pants as his fingertips slid her button free and opened her pants to reveal the black lace panties she had selected. In the back of her mind she had hoped he would see them. She leaned fully back against the wall and her hips thrust forward of their own accord. Every piece of her body and every inch of her skin begged to be touched. She felt his knowing grin against the top of her panties. Mentally she cursed her inability to deny him or better yet, to deny herself.