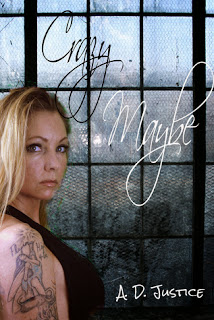 Crazy Maybe
By: A.D. Justice
Publication Date: December 1, 2013
Synopsis:
Recommended for 18+ due to sex, violence, language and adult themes.
Andi Stone is a strong, smart and independent woman, thanks to the help of a famous boxing trainer, Mack, and his protégé, Shane, who have respectively been like a father and brother to her. But that wasn't always the case. Andi never knew what a “normal” life was like. Having been raised in foster care from the age of six after the death of her parents, Andi became emancipated at 16 after an especially horrible incident forced her into a psychiatric hospital.
Luke Woods, the family black sheep and street-brawler, is determined to be a successful professional boxer despite his family’s protests. He needs Andi’s help to get there. The wedge between him and his family over his past relationship issues and career choices is not easily overcome. Luke must learn to face the past mistakes, fears and demons that constantly plague him.
Fireworks and passions quickly ignite between Andi and Luke in the midst of the chaos that surrounds and threatens them. She never revealed the secrets and lies that have plagued her, but when she publicly inherits her family fortune, the living, breathing past comes back to torment her and threaten all that she holds dear. For the first time in her life, Andi must learn to rely on someone else to love and protect her or risk losing the man she loves.
Sometimes love isn't enough. Sometimes it’s all you need.