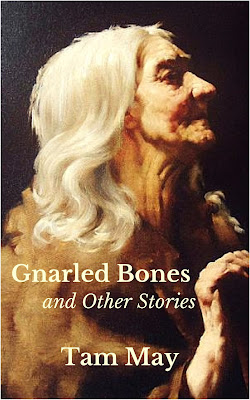 Gnarled Bones and Other Stories

Gnarled Bones and Other Stories explores five tales of loss, fear, and guilt where strange and spooky events impact people’s lives in ways that are profound and unchangeable.

In “Mother of Mischief”, a newly divorced woman goes back to school to begin a new chapter of her life only to find herself circling back to where she started. In “Bracelets”, childhood nostalgia mingles with brutal fear during a circus outing for a mailroom secretary and her friends. In “A First Saturday Outing”*, a lonely woman ventures out of her isolated apartment one quiet Saturday afternoon to an art exhibit that leaves an eerie impression on her psyche*. In “Broken Bows”, a middle-aged violinist reveals the mystery behind his declining artistic powers to a lonely woman on a train. And the title story, “Gnarled Bones”, paints a portrait of the complex bond between an orphaned sister and brother through journal entries and first-person narrative. For these characters, the past leaves its shadow on the present and future.

* This story was featured on Whimsy Gardener’s Storytime With Whimsey and can be found here: https://www.youtube.com/watch?v=PW9mgw4qhuA. 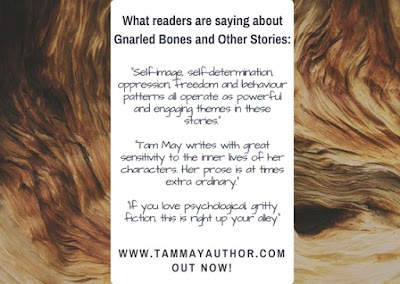 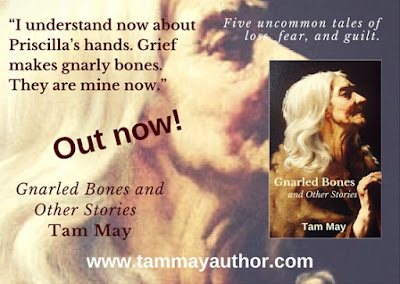 Gnarled Bones and Other Stories is available in paperback and ebook now on Amazon https://www.amzn.com/dp/B01MS7P9EM. 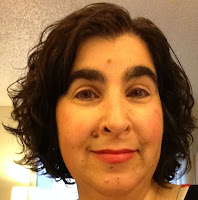 Tam May was born in Israel but grew up in America. She has a B.A and M.A in English and worked as a teacher before becoming a full-time writer. She started writing when she was 14 and writing became her voice. She writes dark psychological fiction about characters from the inside out. She currently lives in Texas but calls San Francisco and the Bay Area home. When she’s not writing, she’s reading classic literature and watching classic films.

Interview With Tam May:

1. Can you tell us a little about your books?
I have one book out right now called Gnarled Bones and Other Stories. It’s a collection of 5 short stories where characters encounter past demons and emotions that affect how they feel and behave in the present. The stories have a dark psychological edge and a few of them have an element of magical realism.

2. How did you choose the genre you write in?
When I first read Anais Nin’s book Under a Glass Bell and Other Stories. The stories are experimental, kind of surrealistic, written in a beautiful lyrical prose style. I was fascinated by how Nin could take a character and explode her or him, showing what she or he is like from the inside out. Then I read Nin’s The Novel of the Future where she talks about her interest in psychological reality https://thedreambook.wordpress.com/2016/02/14/psychological-reality/ and it really spoke to me. I started experimenting with psychological fiction and wrote a novel in three separate narratives about a wealthy San Francisco family and their crumbling relationship. It touched on emotions that were very close and frightening to me, so I spent years trying to revise it without understanding why it wasn’t working for me. I came back to it a few years ago and now I’m working on it as a novella series.

3. When did you know you wanted to write a book?
When I was fourteen. I had no voice at the time, no real identity or opinions of my own. My sister had a friend in junior high who had been writing since she was five. She introduced her to writing. We’re twins, so I always wanted to know what my sister was doing J. Her friend finally told me what all the new notebooks my sister had been carting around were about. The idea of writing a book fascinated me, the idea of creating an entirely made-up world. So I started keeping a journal and also writing a children’s book.

4. How is your writing day structured?
It depends. I can’t write for a long stretch of time so I usually write for about an hour in the morning or in the evening, depending what I have to do for the day. Then the day is a mixture of personal errands and writing tasks like revising, critiquing, promoting, blog post writing and revising, etc. I do make a schedule every week but I’m horrible at estimating how long a task will take me. I usually end up spending a lot more time or a lot less time than I blocked out on my calendar.

5. Do you have a favorite spot to write?
I live in a tiny apartment, so there isn’t really much space. But my living room has a nice glass patio door so there’s a lot of light there. I have a small desk in my living room where I write first drafts by hand. When I work on the computer with revisions and other stuff, I sit on my recliner with my lap desk because it’s just more comfortable.

6. Do you have a favorite food or drink you must have nearby when writing?
Coffee! Lots and lots of coffee J.

7. If you could spend 24 hours as a fictional character, who would you chose?
This might sound really weird, but I would be Giullieta Boldrini in Fellini’s Juliet of the Spirits. I was so enthralled by the quiet, understated way her character took in all the beautifully bizarre and somewhat frightening things going on around her which were totally new to her. I also loved how she found her freedom in the end, though Fellini does leave us hanging as to what she does after that.