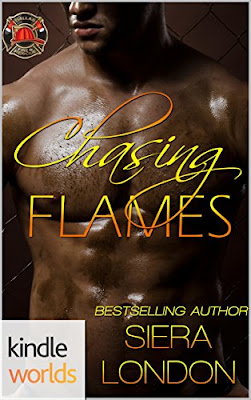 Waitress, Symphony Porter’s obsession with fire has made her a target for distrust and rejection. She’s broke and with her home weeks away from foreclosure, she’s eager to drive to Key West to claim an unexpected inheritance. Symphony arrives in town expecting a quick exit, but soon stumbles into trouble—to include six feet three inches of scorching hot danger to her heart. With time running out, the last thing Symphony needs is a handsome investigator hot on her trail.

Fire investigator, Nathan Zachary has had enough relationships crash and burn, that he knows at first sight that Symphony is the woman for him. He’s ready to make the saucy waitress a permanent part of his life, but a series of random fires puts Symphony on a collision course with Nathan’s case. As the spark of attraction ignites between them, so does the danger and suspicion.

Nathan is everything Symphony’s ever wanted, but she’s learned good things don’t last for long. To make matters worse, someone in town knows her secret. As the evidence mounts, how will these two fiery lovers learn to trust and uncover the truth before their happily ever after goes up in flames? 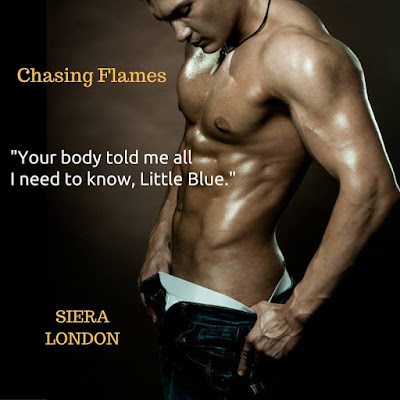 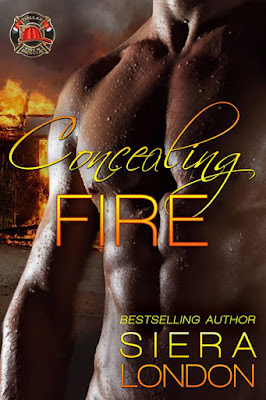 Concealing Fire Blurb
Blurb
Dallas Fire & Rescue firefighter, Kendall Raine goes out of her way to avoid male attention. She's focused on salvaging her career and  the temporary assignment to Key West's Old Town Firehouse is just the opportunity she's been waiting for. Unfortunately for Kendall, her hot as sin team mate threatens her focus and stokes an internal fire she thought long extinguished.

Firefighter and former Marine, Cutler Stevens sees beyond Kendall's disguise the moment he lays eyes on her. As a general rule, he likes his women easy and uncomplicated, but attraction and curiosity sparks a deep desire to uncover what Kendall is desperately trying to hide.

After a natural disaster forces them together, Cutler knows one night with Kendall in his arms will never be enough, even if she won't admit it.

Just when Kendall accepts the burning passion Cutler offers, they are both tested when her past follows her to the southernmost point. How far will Cutler go when he discovers what Kendall is prepared to do to preserve her new life? Will their decisions protect their newfound love or unveil a secret that will consume them both? 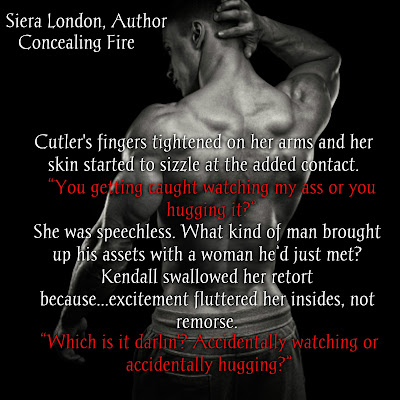 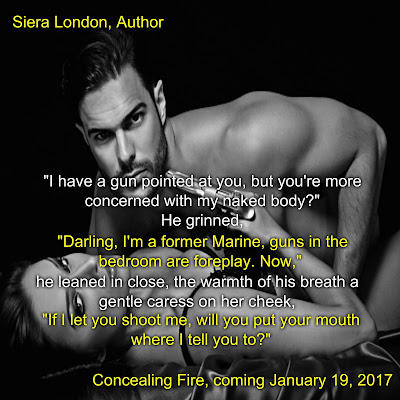 
CONCEALING FIRE Excerpt:
His blond hair flowed in thick waves to just shy of his shoulders. It wasn't that uni-shade of blond from a bottle either, nope. His mane consisted of layered dark strands with golden ropes beneath sun-lightened waves. The ends were saturated with rainwater and she noticed the curl pattern had deepened. With those blue eyes, the body designed by a god, and the storm on the horizon, she half expected a trident to appear in his hand and the rain to obey his command. Definitely, Olympic God material.
“Kendall.”
Her breath hitched when he called her name. Unfortunately her brain was preoccupied with shoveling coal into her long dormant sexual furnace so Kendall didn’t stop her forward advance. She continued on the horny bunny train to X-ratedville until she slammed into his back. The air swooshed from her lungs. Her right foot slipped and she felt her knee buckle. In an effort to break her impending fall, she grabbed Cutler around the waist, plastering her front to his back. Dang, his ass was rock hard and she melted into his backside like butter on hot breakfast toast.
A muscled forearm came down over hers, locking her in place. The heat from his palm, broad and callused, warmed her wet skin.
He chuckled. “Grabby little thing, aren’t you.” For a moment they both stood still. “I like it.”
Her head rested on his back. Slowly, remnants of proper manners invaded her conscious thought and she moved to pull her arm free of his.
“It was an accident...sorry.” Seconds ticked by in silence. Would he accept her apology? People bumped into one another everyday, of course he would accept her apology. She realized the fantasy musings combined with an active imagination had her overreacting. So, why hadn't he said anything?
Cutler's fingers tightened on her arms and her skin started to sizzle at the added contact.
“You getting caught watching my ass or you hugging it?”


About Siera London:
Siera London is a #1 Amazon bestselling author of contemporary and romantic suspense. She’s a retired advanced practice nurse and served 22 years in the United States Navy. She writes stories about sizzling heroes, sassy heroines, and seat of your pants suspense. Siera lives in Florida with her husband, and a color patch tabby named Frie.

Interview With Siera London:
1. Tell us a little about yourself and your background?
A lovable, Type A++ Bookworm. I’m a Florida native, but my military career took me from Florida to Rhode Island, Virginia to Japan, Maryland to California, and finally to the Florida Keys. Retired as a pediatric nurse practitioner with 22 years of service in 2013. My husband and I, are empty nesters that look forward to a back seat filled with audiobooks and a long highway.

2. Which actor/actress would you like to see playing the lead character from your most recent book?
Hands down, Jason Lewis would be the perfect actor for Cutler Stevens. The sexy Marine now firefighter is the kind of everyday,  island cowboy that women adore.

I have no idea who this sensual redhead is, but my heroine, Kendall Raine is an experienced fire expert and she’s packing heat in and out of the bedroom. The picture speaks for itself.

3. What is the easiest thing about writing?
Generating story ideas! Rudimentary storylines pop into my head while I’m cleaning the house, at Tuesday night line dancing class, at…church….during the sermon. Honestly, I have to focus on my WIP or another group of characters will intrude before I type ‘The End’. Ideas are great, but trying to hammer out a plot line and a character arc is daunting!

4. Do you proofread/edit all your own books or do you get someone to do that for you?
H*ll! Is it even possible to edit your own work? I actually have TWO editors to help me cleanup my manuscripts and—they are worth every nickel. :-)

5. What book/s are you reading at present?
Lori Foster’s NO LIMIT, Mary Wine’s HIGHLAND SPITFIRE, and Xyla Turner’s UNDERTONES

7. To end, will you please tell us a little bit about your current projects?
I’m writing books 4 & 5 in my bestselling series, The Bachelors of Shell Cove, Claiming Janna releases in April 2017. My agent has me crafting a brand new 3-book romantic suspense series. And of course, the Fiery Fairy Tales series has a third release coming in May, Commanding Heat.