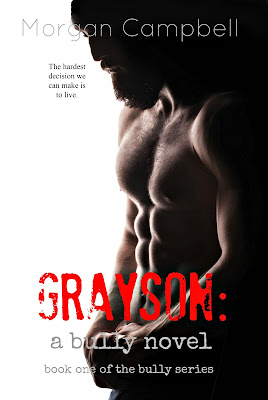 Blurb
Ten years ago…
-Grayson-
A month and a half ago, I made a choice.
A choice that nearly cost me everything:
my friends, my family, my life.
Who knew that choice would nearly cost me my future?

-Finn-
A month and a half ago, I made a choice.
I chose to turn my hell into someone else’s.
I nearly ruined someone’s life because I couldn’t handle my own.
Who knew that choice would threaten my future?

Ten Years Later…
Grayson Michaels made that fateful decision as a teenager, he’s determined to not let the past define him. Control him. Bind him. Vulnerability is not an option. When his demons surface in the form of Finn Abbott, Grayson learns that everything isn’t as it seems.

Finn Abbott is trying to put his life back together. Divorce, house arrest, and a slew of lovers have only caused his life to spiral out of control. But a job offer comes along and everything seems to be back on track. That is until the ghost of a scorned boy returns in the form of a vengeful man.

Fate is a fickle friend. Questions need answered and debts need repaid. What happens when past and present collide? Can two people destined to be enemies find love instead? As they say, there’s a fine line between love and hate. 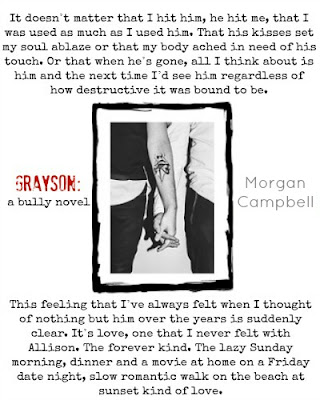 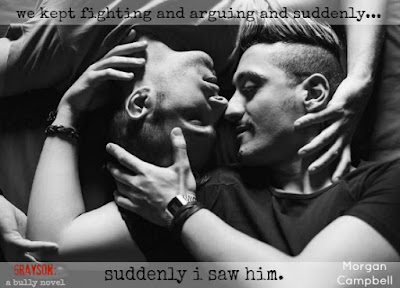 
“I started cutting here,” and he places my fingers on his forearm. His eyes never leave mine as he keeps talking. “On both arms.” I start to look down but he stops me. My free hand slams across my mouth and stops the silent screams from escaping. I start to shake my head in protest. Inside my head I’m screaming no.
“Eyes on me, Abbott. Only on me if you want to know the story.” He then lowers my hand to his thigh, warm, strong, and so close to –
“Then, I moved to my thighs.” Here, I feel some slightly raised skin. I breathe in a shaky breath through my nose. I can’t move my hand from my mouth just yet. I feel the sharp sting to my eyes and I try to will them away. I don’t like where this is going and it’s all my fault. “And finally, I … I.” He closes his eyes and drops my hand. The pained look on his face kills something inside me.
I put my hands on either side of his face and he opens his eyes. “Tell me, please,” I rasp and I can’t stop the rogue tear that slides down my face.
“Two days before Halloween, I did this,” and he takes my hand and moves it across the thick scars on his wrist. “I hated you. So much so that I wanted to die for everything I was put through because I thought the world would be better without me in it …” His voice trails off, hollow and void of any emotion. Dead.
I completely lose my shit.
The tears come pouring down my face in heavy, hot rivulets, burning my eyes and heating my cheeks as they fall.
My body slumps over and I’m on my hands and knees, trying to breath in air. But my lungs don’t cooperate as it proves to be difficult to inhale air. I manage to breath in a deep gulp but the burn hurts.
My hand clutches the skin over my heart, or what was once a heart. There’s an emptiness where my shattered heart once lay. In the wake of Grayson’s news, I could feel the stabbing pain as it broke piece by piece.
My soul was damaged. Irreparable, irreversible, and irrevocably damaged. 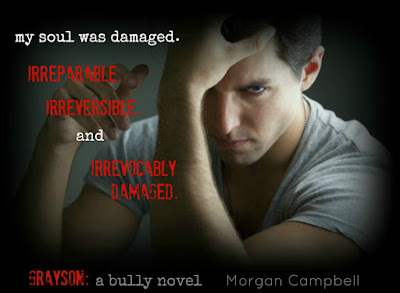 Author Bio
Morgan lives in the south of Texas, going back and forth from Austin and Houston, with her husband. When she’s not writing, she can usually be found with her nose stuck in a book, cooking, baking, crocheting, and causing a general ruckus with her friends and family! Filled with an overactive imagination at a young age, she began writing her thoughts down in a journal, and the rest, as they say, is history.

Interview With Morgan Campbell:
1. Can you tell us a little about your book?
Grayson is the story of a 16 year old kid, who happens to be gay, who gets bullied after a school project he did on the most popular guy in school. He gets tormented so badly he tries to kill himself. Fast forward ten years, Grayson is the head of his own company, and who should he run into? the guy who bullied him - Finn Abbott. It's a book filled with loss, forgiveness, and love.
2. How did you choose the genre you write in?
I LOVE m/m stories. They're hands down my favorite part of the whole romance genre. Naturally when I wrote Grayson, it just kind of made sense that it was going to be m/m. I tried writing a book with a male and female leads but it didn't quite work out as I'd hoped. It was quite awful really!!! LOL!
3. When did you know you wanted to write a book?
Years ago, actually! Grayson: A Bully Novel is my third book written but my first published. I'll get the others polished and published but there was something about Grayson that made me say 'Do this one first.' Hubby was the one who gave me my push though. He told me to 'Write the damn book already,' so I did!
4. Do you work with an outline, or just write?
A bit of both. I write down what I want to focus on in each chapter, but that's it. I learned a long time ago that what I want to happen and what I write down aren't always the same thing! Sometimes I completely deviate from my plan. I never understood how it would happen to some authors but now I get how stubborn some characters are!
5. Do you have a favorite spot to write?
On the sofa, sprawled out, with music playing loudly. Sometimes with my dog sitting on my feet! I have a super comfy office that rarely gets used, poor thing ;)
6. Do you have a favorite food or drink you must have nearby when writing?
I always :P
7. If you were a super-hero, what powers would you have?
Oh, easy, I'd want to fly because then I could go anywhere!
8. What are writing projects are you currently working on?
Right now I'm finishing Finn, the novella that tells his side of the story and concludes his and Grayson's storylines. The next, and final book, of the bully series has an outline written and that's going to be called Logan. Another series has the first two books written (the first being that pesky male/female book) and I'll get those out soon. I also have a standalone in the works. Lots of things coming out this year!
Posted by Gia Guido at 9:00 AM