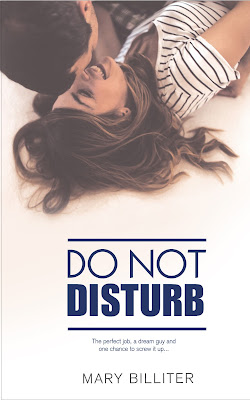 DO NOT DISTURB –
Resort Romances Book One -
by Mary Billiter
Release Date: October 15, 2016 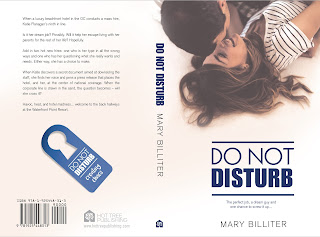 About DO NOT DISTURB
The perfect job, a dream guy and one chance to screw it up...
When a luxury beachfront hotel in the OC conducts a mass hire, Katie Flanagan’s ninth in line.
Is it her dream job? Possibly.
Will it help her escape living with her parents for the rest of her life? Hopefully.
Add in two hot new hires: one who is her type in all the wrong ways and one who has her questioning what she really wants and needs. Either way, she has a choice to make.
When Katie discovers a secret document aimed at downsizing the staff, she finds her voice and pens a press release that places the hotel, and her, at the center of national coverage. When the corporate line is drawn in the sand, the question becomes – will she cross it?
Havoc, heat, and hotel madness… welcome to the back hallways at the Waterfront Point Resort 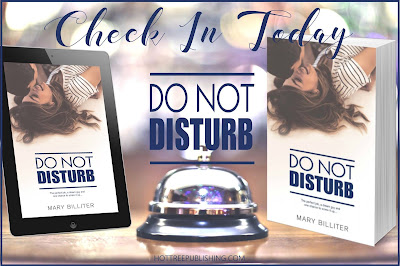 
About Mary Billiter:
Mary Billiter is a weekly newspaper columnist, romance author and college writing instructor. She also has novels published under the pen name, “Pumpkin Spice.”
Mary resides in the Cowboy State with her unabashedly bald husband, her four amazing children, two fantastic step-kids, and their runaway dog. She does her best writing (in her head) on her daily runs in wild, romantic, beautiful Wyoming.

Interview With Mary Billiter:
This was a great question because it prompted me to consider my collection of work. Thank you.
The common theme in my fiction, whether it's romance or mainstream, is a battle worn heroin placed in a situation where she has a choice – dig deep and face her greatest challenge yet or quit.
Spoiler alert – my heroines aren’t quitters!
All my heroines…


And my personal favorite…


These are women I admire. Their stories show me that falling in love takes courage and an equal amount of spontaneity and humor. Best of all, these every day heroines remind me that happily ever after isn’t just for fairytales.

When I graduated from California State University at Northridge with a degree in journalism my first job in the industry was at KFWB news radio in Los Angeles. The radio station parking lot was behind Capitol records on Hollywood and Vine – a very infamous cross section in the city of Angels. It was an exciting time for a girl in the city.

I worked the overnight shift and after I filed stories or cut tape, I wrote. My heroine was named Catalina (after the island) and her twentysomething year-old misadventures were fun and flirty.

My father was an award-winning LA Times journalist. When I showed him my work in progress he suggested I submit it to Harlequin. At the time, I didn't realize the compliment. I thought he questioned the merit of my work. And being a young, insecure woman instead of asking him for clarification, I shelved Catalina and any thought of romance. I would pen something more serious.

But when a writer isn’t writing the story they were meant to write and are trying to write the story they think they should write – the end result usually isn't favorable. Or productive.

When my father died I had just turned 29 and my identical twin boys were six weeks old.

I adored my dad. One of his pearls he gave me before he died was when he told me, “Don’t go through your life trying to please your parents because you never will.”

It was a hard lesson he learned in his life. And even though he gave me permission to be the writer I was meant to be it wasn't, sadly, until he died that I stepped out from behind his legendary shadow.

I still had a lot of false starts but I kept at it. I enrolled in fiction writing classes offered through the community college and learned the craft from ground up.

Journalism's focus is on neutrality, remaining objective and reporting in an unbiased nature. Fiction writing breaks all those rules.

The uniting thread between journalism and fiction, though, is the ability to reach the reader.

I have found that emotion is the common core.

Readers may not have had the same experience, but the feelings and emotions that arise from abandonment, loss, heartache, redemption and romance are universal.

Who doesn't want to be swept off their feet by a romantic gesture, a kind word or heroic action?

I always knew I wanted to be a writer I just never allowed myself the freedom to be one. Today I do.

I know this is going to sound trite but I really feel as though the genre chose me.

My birthday is February 6, but my due date was Valentine's Day. From the onset, I was struck by Cupid’s arrow. I love, love. Red is my favorite color. I sign all my books with a heart. Crazy, right?

But again, who doesn’t fall for a good love story? I like the slow build, even the occasional heartbreak, and that moment of elation when all the pieces fall back together again. It’s magical.

I'm a sucker for romance. Romance stories carry a reader away and give them someone to root for and remember. And in today's troubling times a little escapism isn't such a bad thing!


I have found that my cell phone is my best friend.

This past year I was diagnosed with breast cancer. I underwent two major surgeries and three painful procedures.

Even though my laptop is light, it felt like an elephant’s foot on my lap during my recoveries. But a cell phone? Heck, that’s hand held.

Breast cancer wanted to invade every part of my life, but it wasn’t going to win. I wouldn’t allow it. And with my phone, I could continue to write in the notes section. Chapter by chapter. Word by word. I wrote. The best part? On a phone, it’s a lot harder to edit. So I found a new freedom. I just wrote without self-editing and criticizing myself. It was truly a gift.

Have phone will write.


No but I have favorite songs like “Lost Boy” by Ruth B, “Same Old Love” by Selena Gomez and “The Very Thought of You” by Frank Sinatra. But when I’m on the treadmill writing on my phone, my go-to song is “Beauty and a Beat” with Justin Bieber and Nicki Minaj. Yeah, I’m owning it.

Coffee. Coffee and more coffee. Caffeine should be its own food group. A good cup of blonde roast fills my daily hierarchy of needs.


Well, you probably didn’t realize this, but I’m already a superhero.

I've been battling breast cancer since October 15, 2015. And I've been kicking its ass with superhero strength.

In fact, I've got ninja moves that would wow you. I mean any woman that can write with one hand while she's icing down her breast with the other – truly superhero strength and resolve.

But it was tapping into an inner strength I didn’t know I possessed to finish “Do Not Disturb” when breast cancer tried, at every turn, to be victorious.

I wrote when the pain was so intense it felt like I was dying. And sometimes I thought it would be easier if I had. That's what breast cancer does. It tries to win. It tears you down until you feel hopeless. And hopelessness is its own death.

I found that breast cancer’s kryptonite was when I wrote.

Lost in the world I created, I was no longer in a hospital or a cancer care center. In writing “Do Not Disturb” I was back on the beach feeling the warmth of the sun as two delicious guys vied for my attention. I experienced the seasons change and settle in Huntington Beach, California where I grew up and spent endless summers in my childhood. The story ends in October, the month when my life changed. And in writing “Do Not Disturb” I created a new ending.

Writing romance carted me away from the pain, the daily chemoprevention and my hair that was sacrificed in the process.

Writing romance also put breast cancer’s victory out of reach because when a woman has hope, she’s willing to fight.

Finishing “Do Not Disturb” saved my life. Its fun, flirty and my first romantic comedy. Of all my work, I'm most proud of this story and for not quitting

Katie Flanagan isn’t a quitter and neither am I.

I’m a badass breast cancer warrior, the best kind of superhero.
As soon as I wrapped up writing “Do Not Disturb” I immediately began the second in the hotel series about an Oregon coast hotel replete with a lighthouse.
Kelsey and Oliver's story keeps me afloat while I continue my treatment.
Thank you for including me on your blog. It’s been an honor. And to every romance reader, if you're a woman and you haven't scheduled a mammogram, please don't wait. Schedule one today. All my best, xoxoxox Mary