Release Boost for Don’t Say It by Debra Kayn 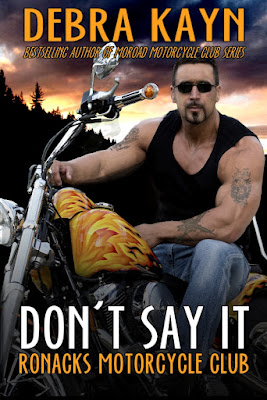 The woman's shelter gave Gia two options. A house in the middle of Wyoming or share a duplex in Montana with a biker.

From the first day of her arrival to Haugan, Gia pushes herself into Swiss's routine. Then, danger moves her into his side of the duplex. The stoic biker with few words and more mystery than her body can handle pulls her under his protection with a profound commitment to keeping her safe from the men trying to kill her. But, close encounters and long nights fail to protect her heart, and she falls in love with Swiss. And, that's the one stipulation guaranteed to push Swiss away from her.

Swiss's ex-Army skills benefit Ronacks Motorcycle Club and the patch on his vest gives him the freedom to live without responsibilities. Responsibilities that nearly killed him in the past. He thrives off solitude until his isolated existence gets interrupted when a sexy lady moves into the duplex and his gut tells him something isn't right. 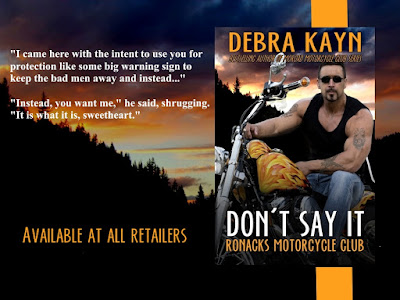 
He continued gazing at you and after a few seconds where she believed she'd crumble in her chair at the hypnotic pull from across the table, he said, "You and your dress, and the way you're blushing right this second, has me thinking I'm going to kiss you."

She caught herself panting and closed her mouth.

"Not here." He straightened and looked around the room and mumbled, "Later."

"Later?" She ducked her chin. Oh God, she'd said that out loud.

He chuckled low. "Do you need a specific time?"

She looked through lowered lashes. "That might help because I can't even think right now with you blurting out everything I'm thinking and looking at me that way and me being scared and not knowing what is going on with everything outside of us…and you. You scare me, Swiss."

He ran his thumb and index finger down the outside lines of his goatee. "All you have to do is tell me no."

The corner of his mouth lifted. Gia sighed in impatience.

"I don't know what I'm doing. You're like nobody I've ever known." She glanced around making sure they hadn't grabbed anyone else's attention. "I'm also feeling guilty."

She sagged in her chair. "I came here with the intent to use you for protection like some big warning sign to keep the bad men away and instead…"

"Instead, you want me," he said, shrugging. "It is what it is, sweetheart."

She burst out laughing and shut off her nervous amusement instantly, mortified that she'd forgotten about everyone else in the bar and nodded. "Yes, I guess that's what I'm saying." 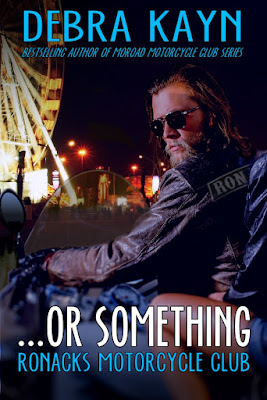 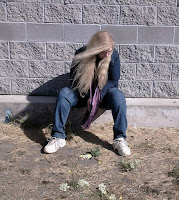 She lives with her family in the Bitterroot Mountains of beautiful Northern Idaho where she enjoys the outdoors, the four seasons, and small-town living.

a Rafflecopter giveaway
Posted by Gia Guido at 8:34 AM