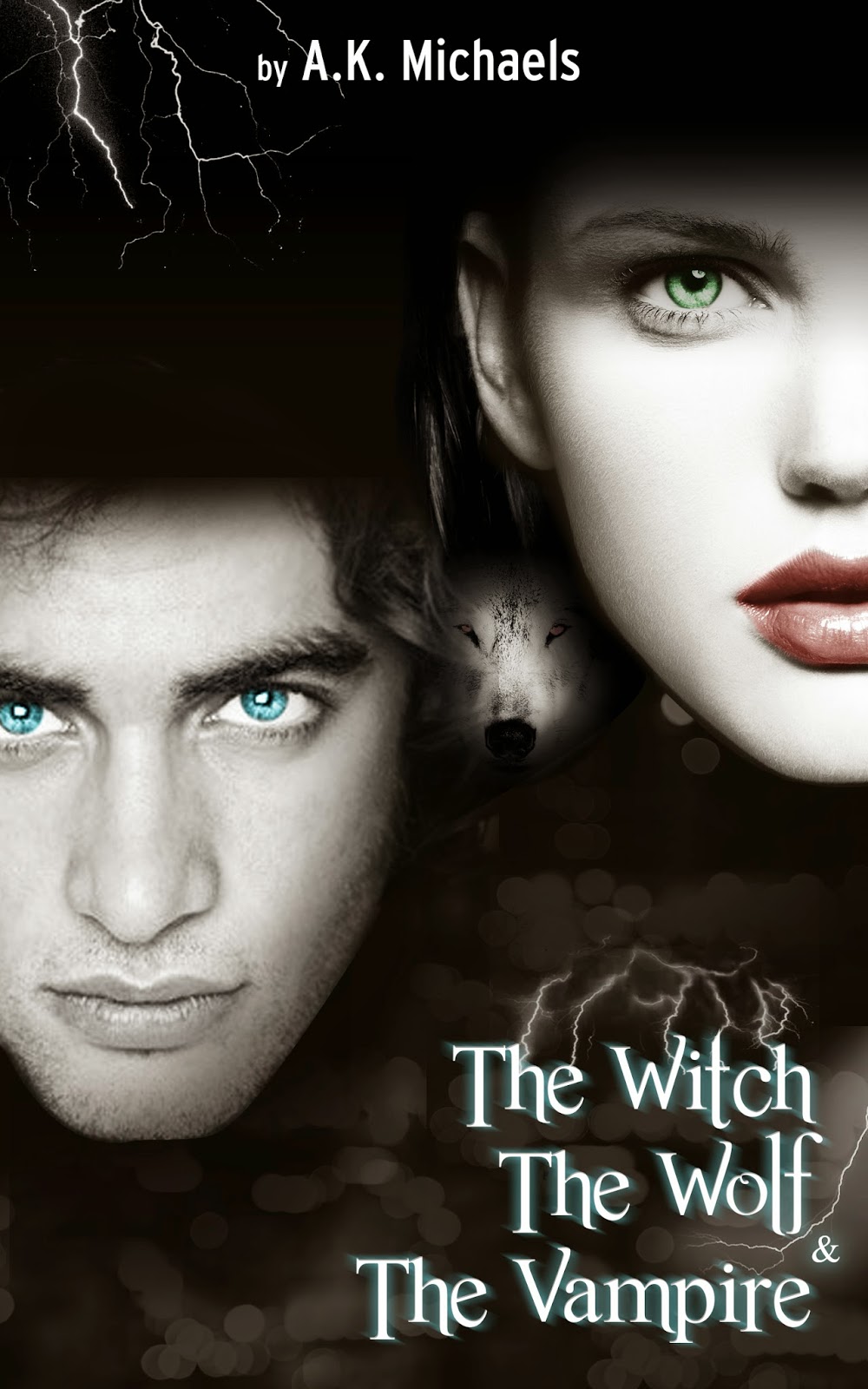 The Witch, the Wolf and the Vampire
by A.K. Michaels

Urban Fantasy: Peri has been running since she was fifteen - using her magic to stay safe. 'They' can track her magic tho, so she has to use it sparingly. In Vegas, for a cash in hand job, and things turn nasty! She knows the amount of magic she would have to use to escape unscathed would bring 'them' right to her. Before she can use the vast magic required two males appear and aid her. One a wolf, one an ancient vampire. Josef, the vampire, and Gabe, the wolf, are more than a little interested in this skinny girl. What ensues shocks both of the strong males - this girl is more than a stray, more than a witch - it looks like she is a mate - for both of them!? Will Peri stay? Will they keep her safe? Who, if any, of the two will she choose? Just how much power does this stripling of a girl have locked inside her? Adult content in this book! 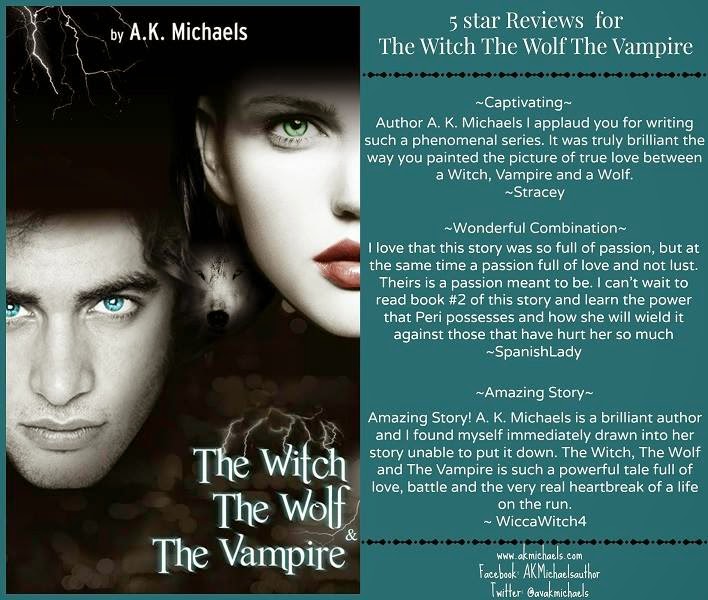 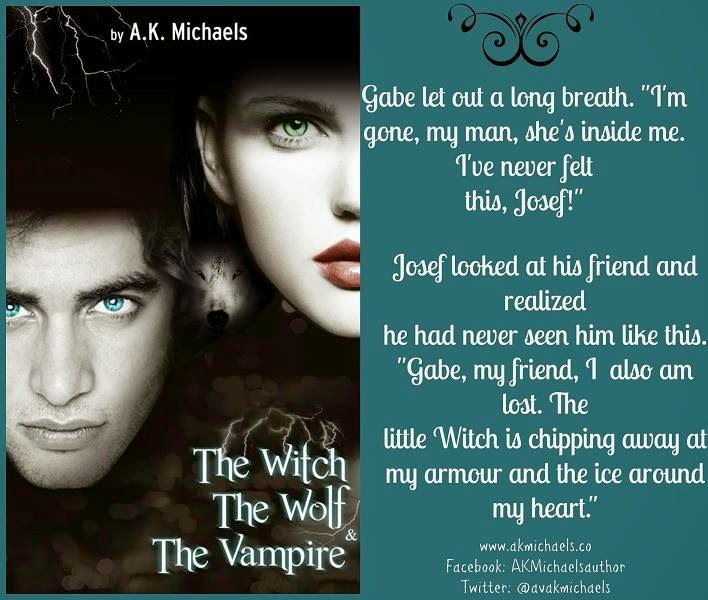 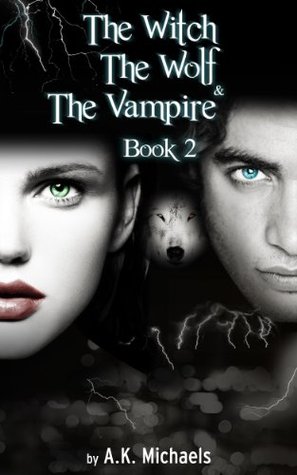 The Witch, The Wolf and The Vampire, Book 2
by A.K. Michaels

Peri has finally stopped running and found safety with Gabe and Josef ... her Wolf and her Vampire. Now she is getting strong, physically and magically, and she is ecstatic with her two mates. She is not about to let anyone take that away and she surprises even herself with her power.

However, a psycho sect has been hunting her for over six years, and they are closing in. Her own father is the leader of this sect, but she is more than willing to do whatever she can to take him down. Destroy him for everything he is, everything he does, before he does to others what he did to her.

With an ancient Vampire and a powerful Wolf by her side she just can't fail ... can she?

Book 2 in The Witch, The Wolf and The Vampire Series by Ava K Michaels, another Hot Paranormal Romance/Urban Fantasy! 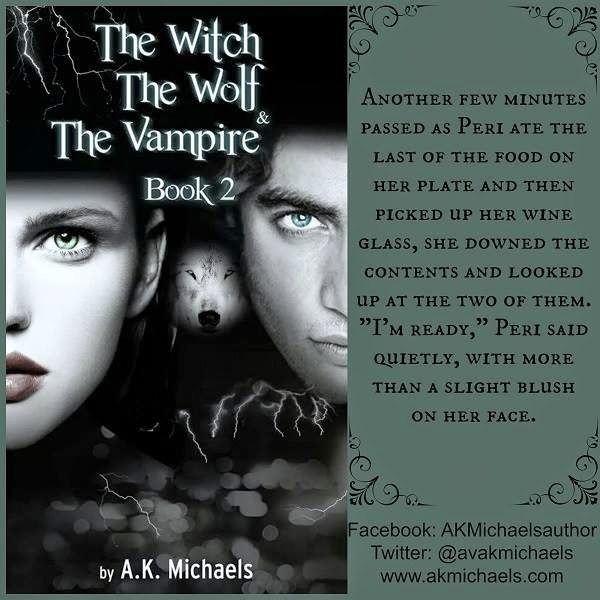 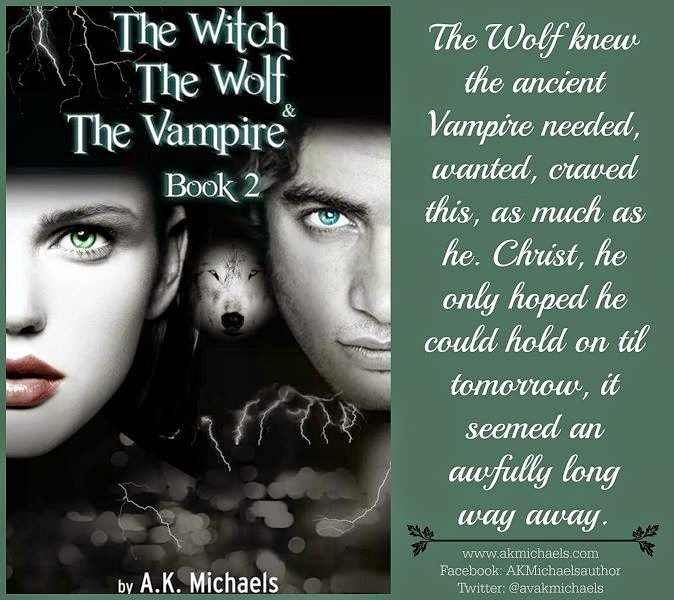 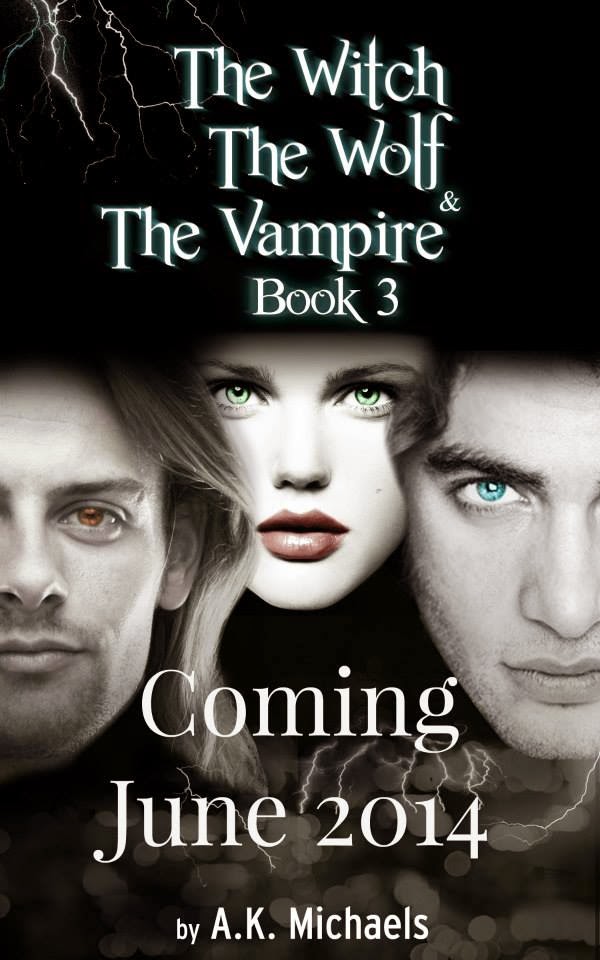 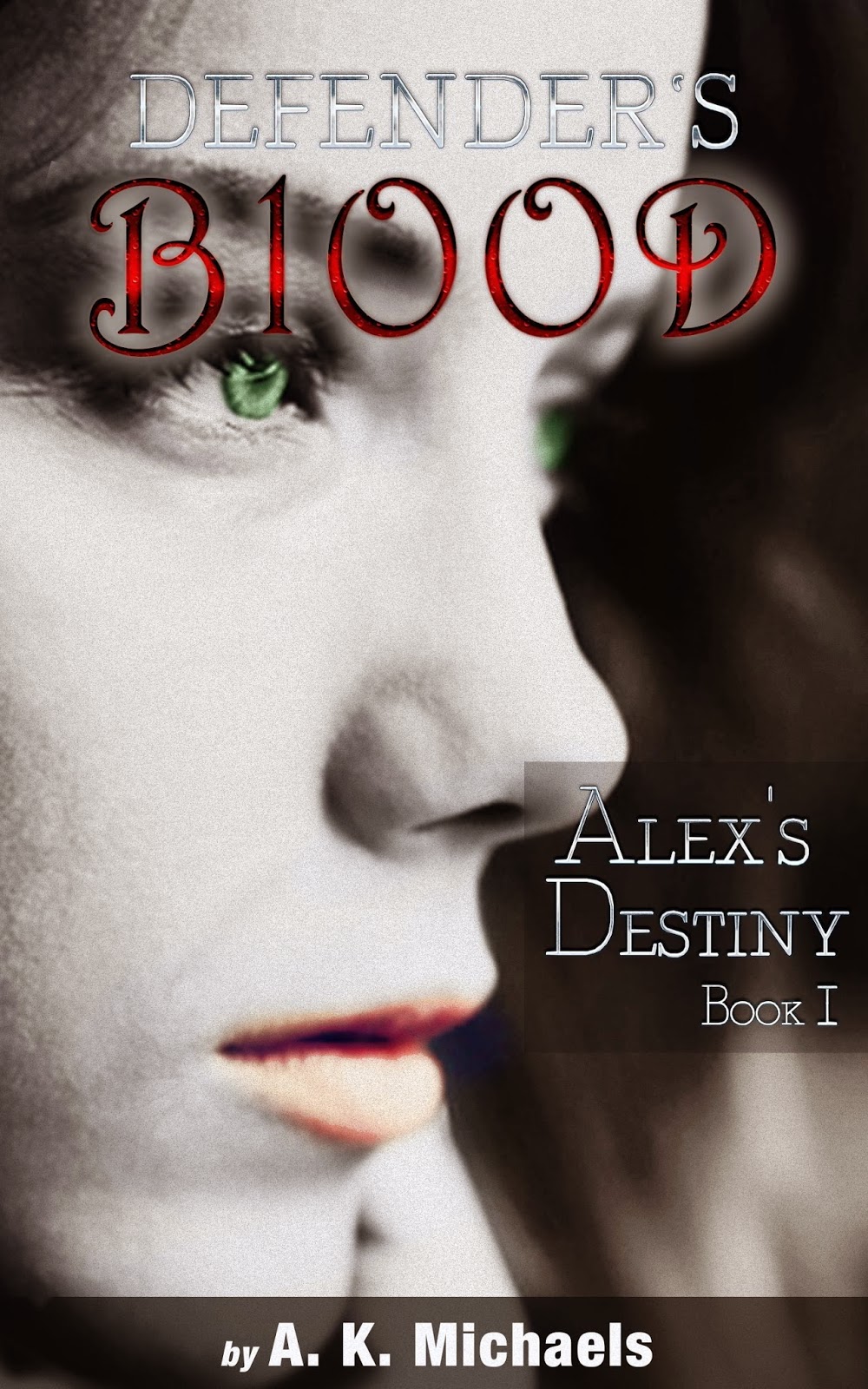 Alex's Destiny (Defender's Blood #1)
by A.K. Michaels
Alex has no idea her life is about to change beyond her wildest imaginings. She is the last in a long line of very special females born for a dangerous task, and she isn't sure she is up to it. Zach, her vampire protector, is just as sure she is.

Demon attacks, angels and even the ultimate, divine intervention, shake Alex to her very core. Can she do this? Can Zach keep her safe? The alternative is unthinkable: demons once more ruling the earth.

Zach has to ensure that Alex puts a stop to this - and quickly! 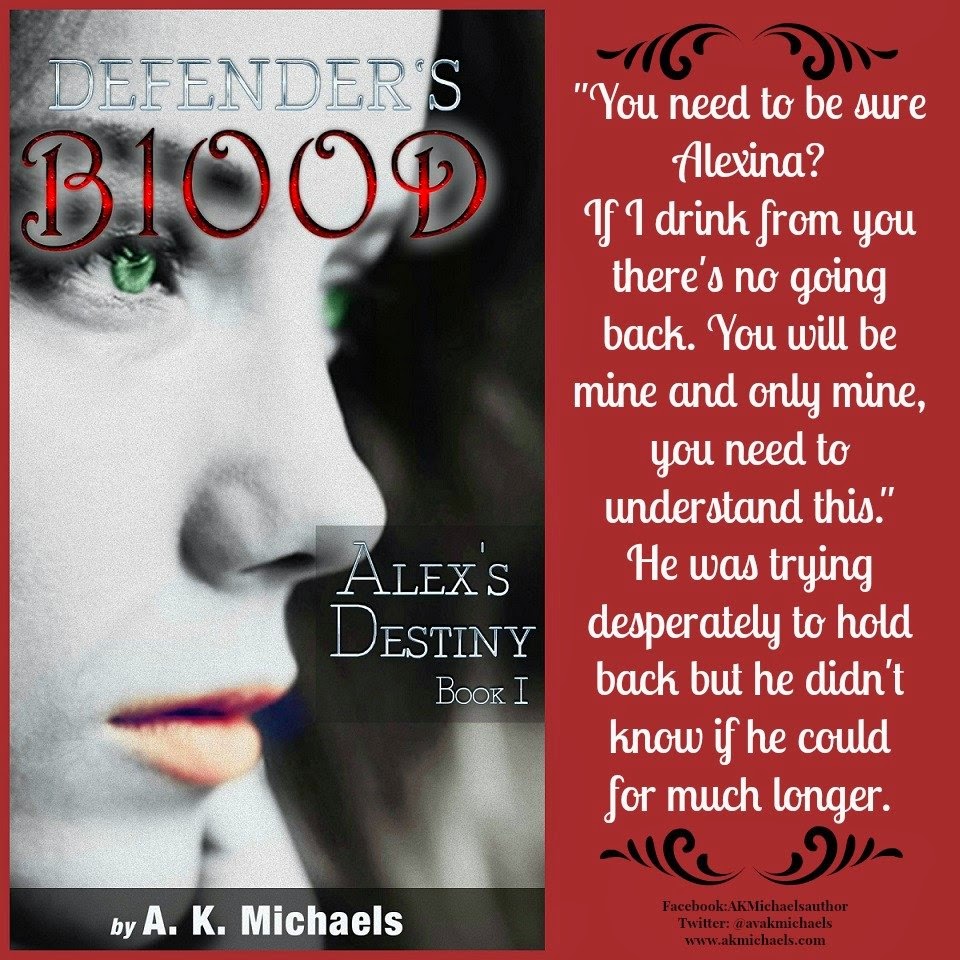 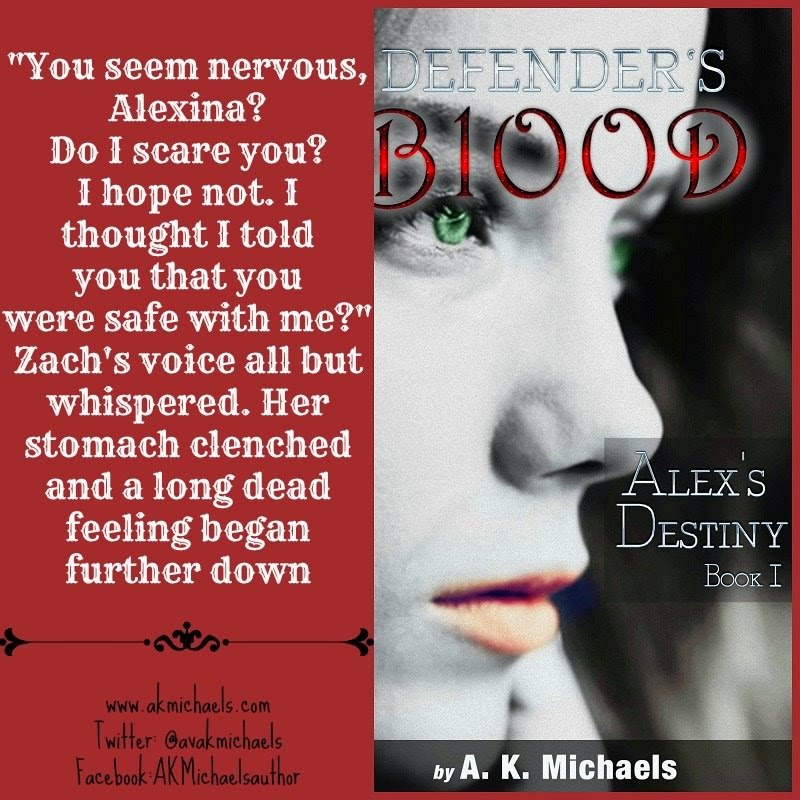 Bio:
A K Michaels was born in Scotland quite a number of years ago! She was married at a young age and is mother to three much loved children. After the birth of her last child she went back to higher education and studied for a year before gaining employment in the banking industry. She worked in that role for a number of years before leaving, both the job and the country.
She lived abroad for a few years before returning to Scotland and finally taking up her dream - writing.
She is the author of the Defender's Blood series of books and two other series, The Witch, The Wolf and the Vampire and also Sabrina's Vampire, together with a Wolf Erotica Novella, Lori's Wolf. Her books fall into the Paranormal/Urban Fantasy genre and she loves writing those particular kinds of stories where she can let her imagination run wild!
She now spends her time reading - everything from Sci Fi to Crime, Erotica to Fantasy, Thrillers to Paranormal Romance. She loves spending time with her family and, of course, writing!