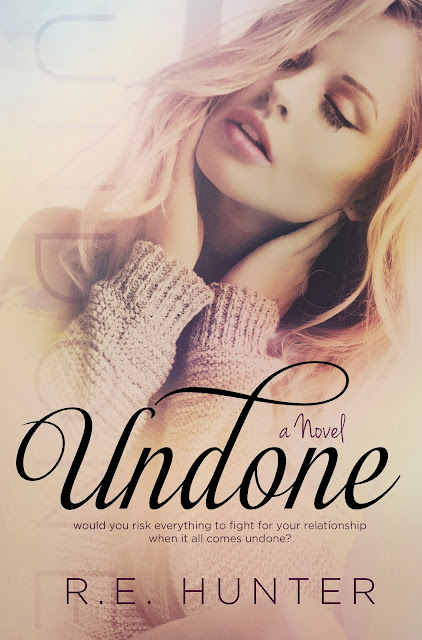 Blurb:
Five years ago, Embry Jacobs ran... She ran from a past that still hasn’t let her go, but her dream of becoming a lawyer is stronger than her fear of confronting that past. Embry’s sole focus is to get through law school—with the help of her best friend, Morgan—and make something of the broken girl she became. Not thinking about falling in love, being in a relationship or even entertaining the idea of romance, Embry is moving forward one day at a time. Luke Brody is charming and sexy, and has a past of his own. He wants nothing more than to put his demons to rest and move on with his life. But, when Embry enters the picture, is he destined to repeat those same mistakes?  Blindsided by their instant attraction, neither Luke nor Embry are prepared for the feelings they’re developing. But will it all be for nothing? Will they let their pasts destroy them, or will they risk everything to fight for their relationship when it all comes undone? 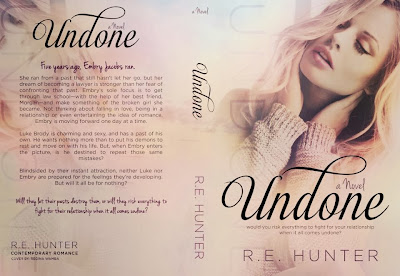 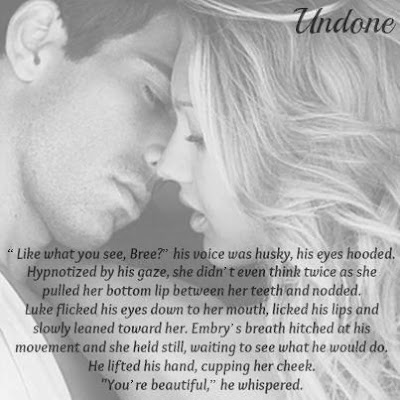 PROLOGUE:
This can’t be happening. That thought ran on a constant loop through her head as she sat in the cold, uninviting classroom, the smell of antiseptic invading her nostrils. A shiver crept up her spine, and she couldn’t tell if it was from the temperature or her nerves. Maybe both. She sat on a hard plastic chair, hands gripped in her lap, her foot tapping furiously against the linoleum. The anticipation was killing her. She studied the three people at the front of the room, their heads bent together as they whispered amongst themselves.
Her heart thumped in her chest, the dull thud echoing in her ears as she sat silently, waiting. Her head swam, and she struggled to keep herself afloat instead of drowning in the anxiety that threatened to pull her under. She strained forward, hoping to catch even a small piece of their hushed conversation, but all she could hear was the shallow murmur of their voices. She wanted to get it over with. Like a Band-Aid, it would hurt either way. Might as well make it quick. She’d had to pick up the pieces of her broken life and move on once before. But she couldn’t do it again, not after all of her hard work. She wouldn’t accept it, she couldn’t.
How did this happen? They’d been careful. Hadn’t they been careful? She swallowed the lump in her throat and tried in vain to think of something, anything else.
The older gentleman on the end cleared his throat, pulling her from her thoughts. “Miss Jacobs?”
She looked up at the members of the university’s disciplinary committee, taking them in one at a time. She straightened her back and lifted her chin, hoping the outward display of confidence would give her some semblance of the same feeling on the inside. That was shot to hell as soon as she opened her mouth. “Y-yes, sir?” she answered, her voice trembling.
“Do you know why you’re here?” the other man asked, his eyes kind.
“No, sir.” She shook her head, but she was pretty sure she had an idea.
“Let me tell you,” the older man interjected, opening the folder in front of him. He explained the purpose of the hearing and the university’s policies regarding disciplinary sanctions.
She sat back, rubbing her palms on her pants and trying to calm down. As she listened to his words, she was hit with a rush of emotion so strong it almost bowled her over. Good. Bad. Happy. Sad. Betrayal. Rage. Shock. Relief. Relief? She fought to keep focused on the seriousness of the situation before her as a litany of memories assaulted her consciousness. 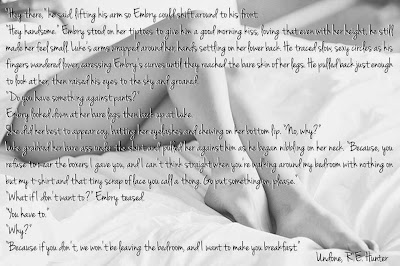 Undone by R.E. Hunter from SchmexyGirl Book Blog on Vimeo. 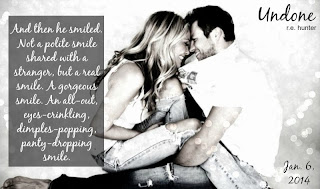 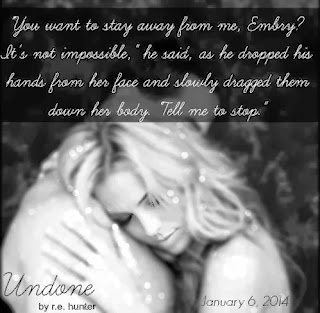 R.E. Hunter is a native New Yorker and lives on Long Island with her husband and their crazy kitten. She works as an attorney by day and writes every spare second she has. She's currently working on the sequel to Undone, which will be released sometime in 2014. When she’s not writing, you can usually find her somewhere near a beach with a book in her hand. 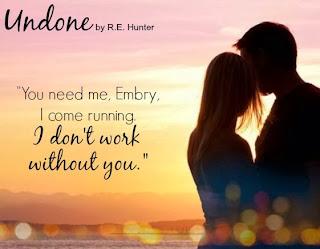