Blog Tour for Shattered By Fate by Jacelyn Rye 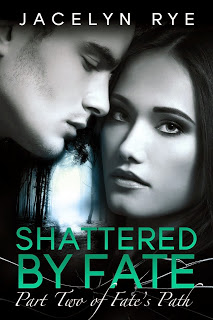 Synopsis:
One heart cannot remember. Another heart cannot forget. Both hearts reach toward something to grasp. For Sarah, it is her past. For Will, it is to bring that past back. The only thing standing squarely in their way — is their future. Each has promised their heart and life to another. But where happiness should be, instead are the dark billowing clouds of a storm of reckoning. The thunder of regret splits a horizon now raining down upon them in shards of shattered promises and unreachable memories. In Book One of this three-part saga, fate seemed it would not be denied, bringing Sarah and Will together in a turbulent world, uniting young hearts for the right reason: love. But — almost as if it has eyes — fate sees to it that no love that is meant to be is allowed to be, without it being tested to the passionate edges of chance. Accidents. Small ones are remembered and retold with a laugh. Useful ones are celebrated. But shattering ones — those are the ones that slip from the fingers of fate. The kinds that are followed by silence as it roars the sound of life changing. And it is this pounding drone that Sarah and Will — once inseparable — now hear when they listen to their hearts. After her accident, Sarah awakens in a hospital room and into a very different life. Will, accidentally buried by heavy timber when he heroically saves a fellow worker, is also delivered into his own unforeseen, disoriented new life. Destiny’s dust never settles. And nothing is clear when doubts appear. Sarah is betrothed to Adley, while Will is engaged to Margaret, yet both are still connected to each other by an indescribable draw seemingly groping out from the deepest reaches of fate. A fate that deliberately leaves the door of temptation cracked open, giving Will a yearning peek at the naked truth of Sarah, who reaches out with the same tortured passions. A fate that leaves both to fight the desperate desires of wanting what each knows they cannot have. A fate that dares them to ask, “What will happen if I finally feel you?” 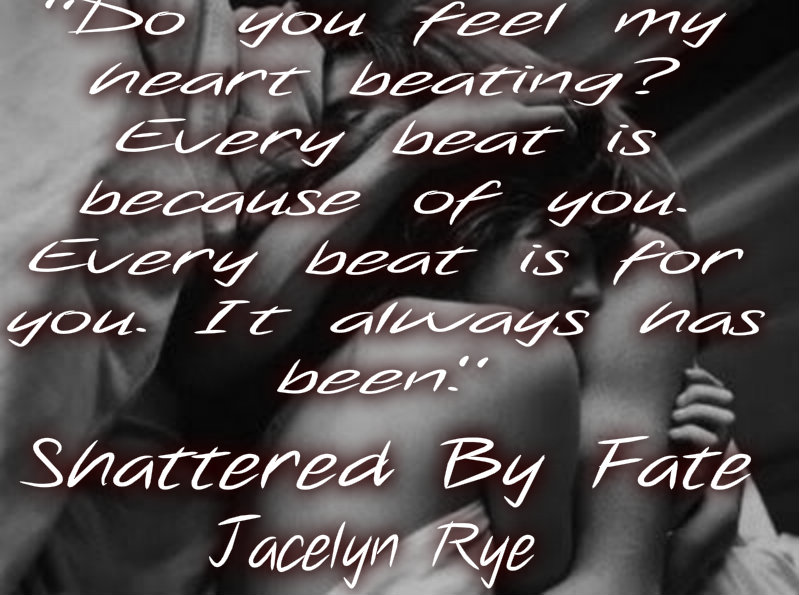 He carried her into her room, but paused to use his foot to swing the door closed behind them.  He gently laid her on the bed, pulled his arms from under her, and kneeled onto the bed. As he brought his body directly over Sarah’s, she looked up at him, both of their eyes pleading with the other for permission.
No words would come.  The emotion flooding her body now was something completely new, yet so unbelievably familiar.  It was as if she were under a spell.  A wonderful, scary spell.  She reached up to his shoulders and ran her hands to the back of his head.  She gently weaved her fingers into his hair.  Her robe opened slightly with the movement of her arms. It was time.  Time to surrender.
He moved slowly toward her and stopped just above her waiting mouth.  “Sarah,” he whispered, so quietly that she barely heard.  “I’ve dreamt of this for so long.  Please tell me I’m not dreaming, now.”
She ran her hands through his hair again, and shook her head.  “Maybe, it is all a dream.  If it is, I don’t want to wake up.  Please,” she said, as tears filled her eyes, “please, kiss me.”
Copyright Jacelyn Rye 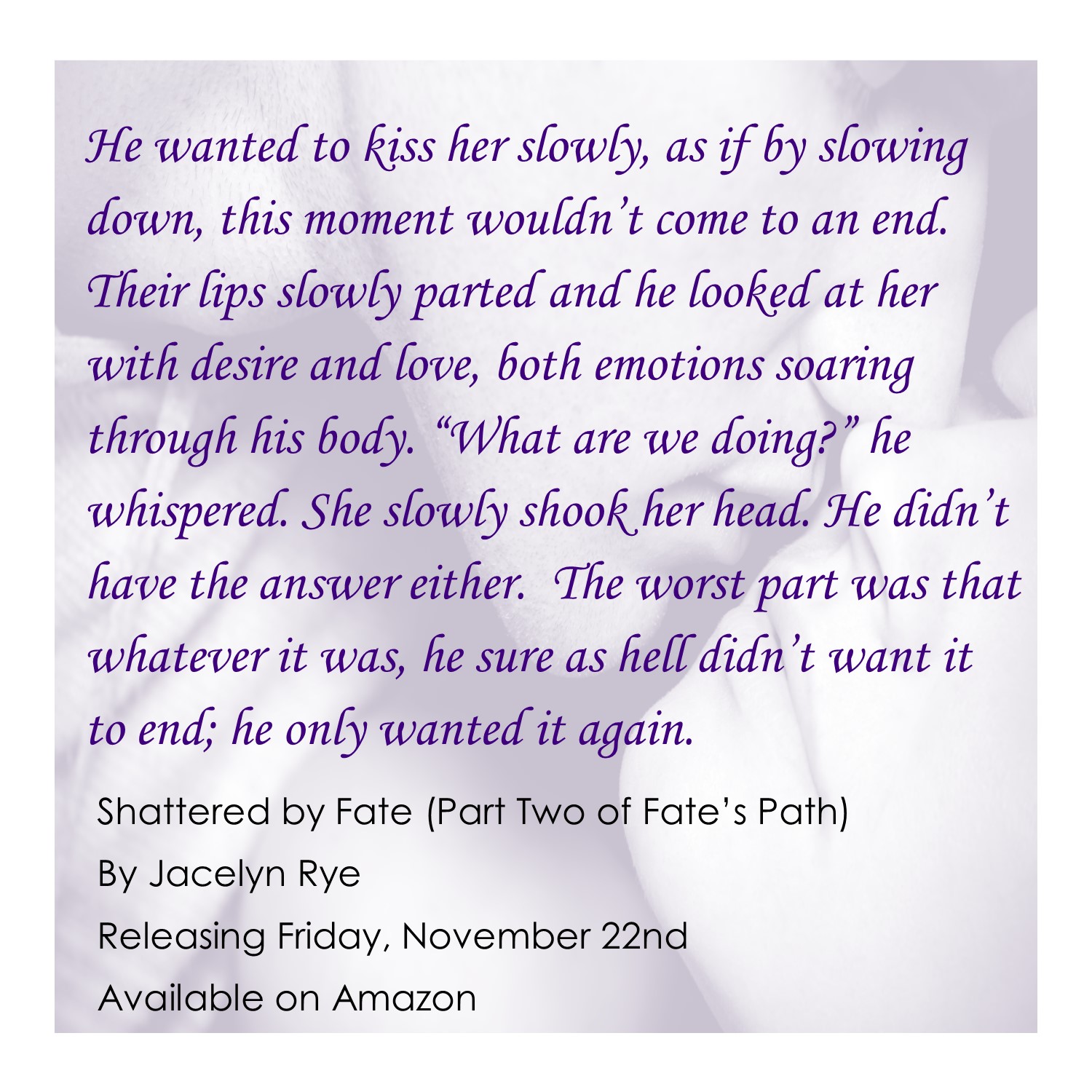 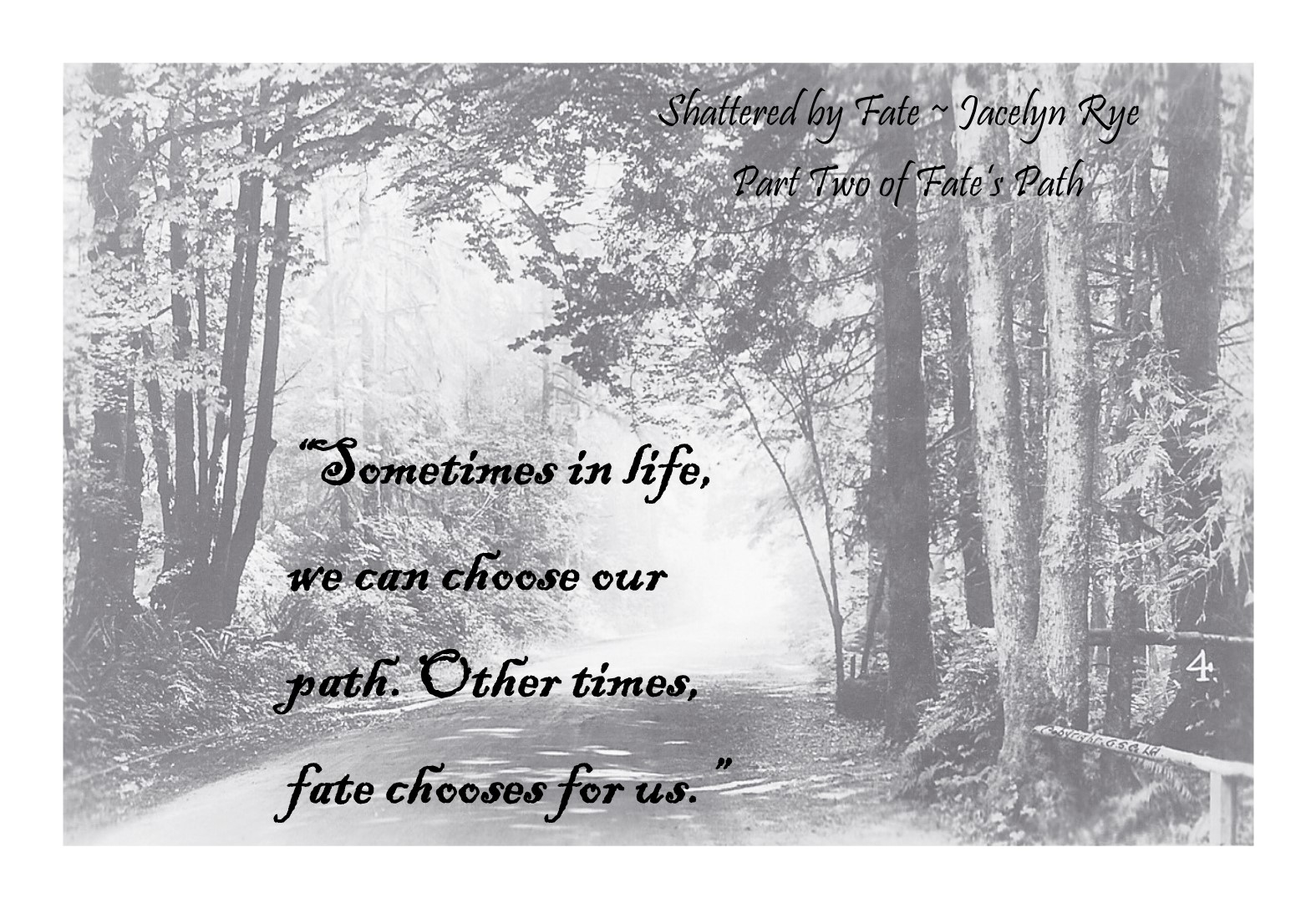 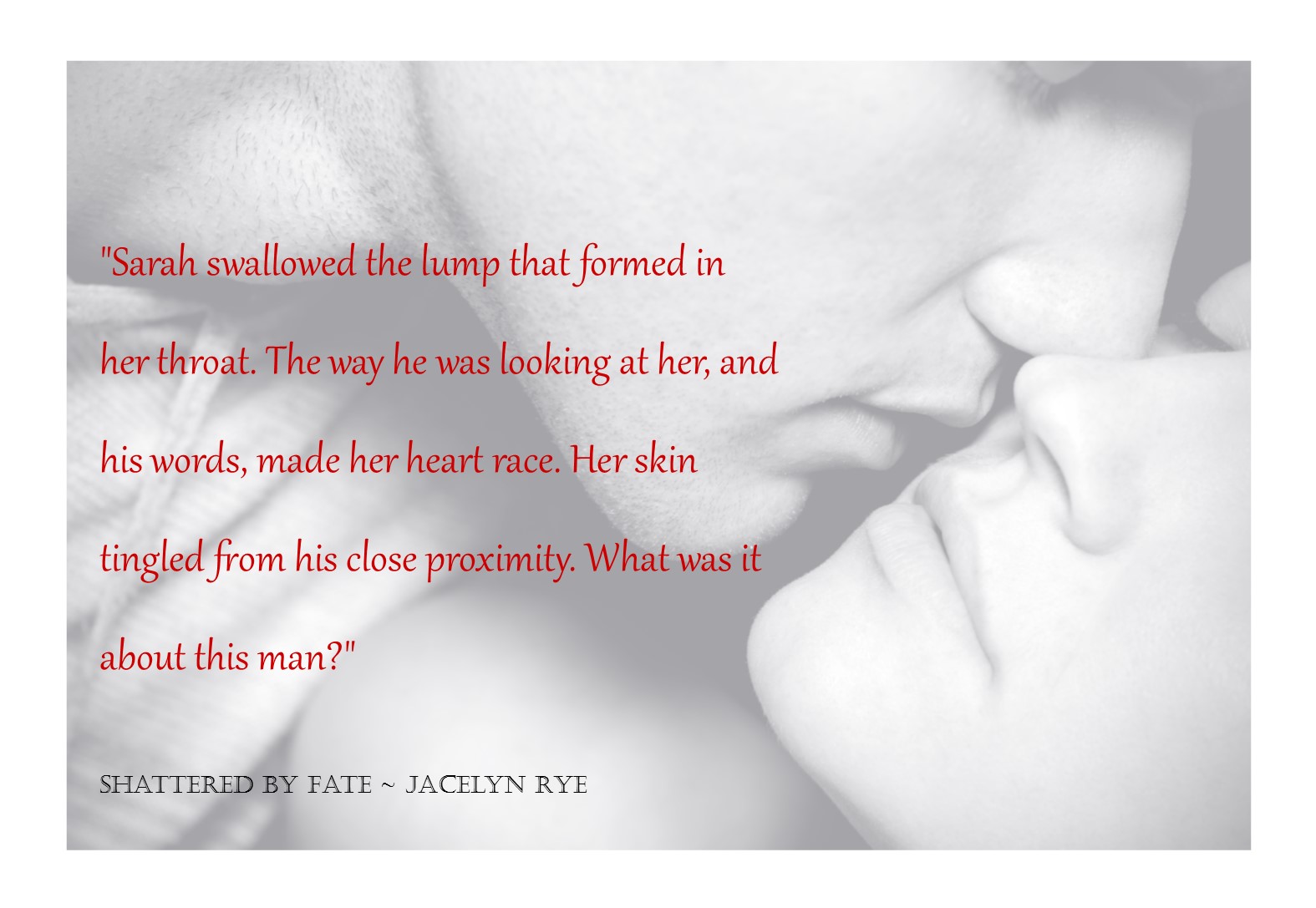 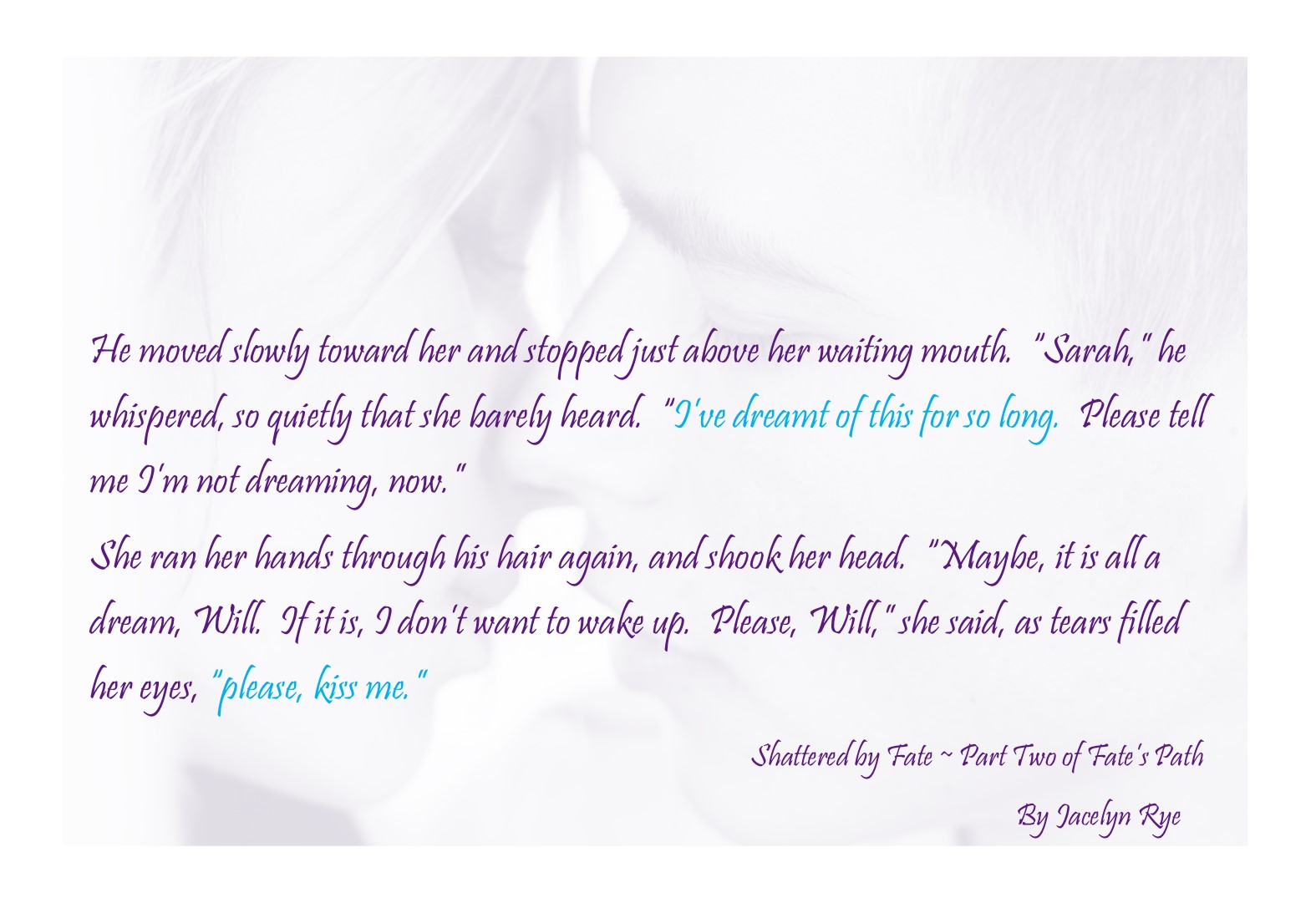 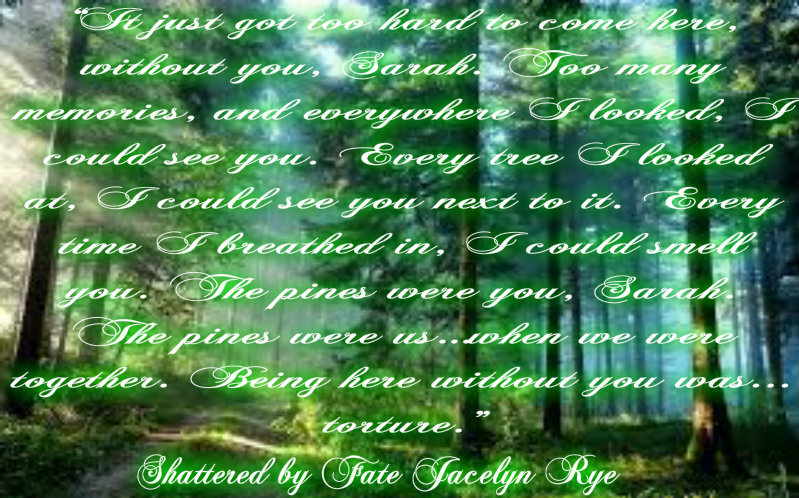 Books in Fate's Path Series:
The books are not stand alone. For your reading enjoyment, please read the books in order.
1--Surrender to Fate
2--Shattered by Fate
3--Chosen by Fate (Releasing Early 2014) 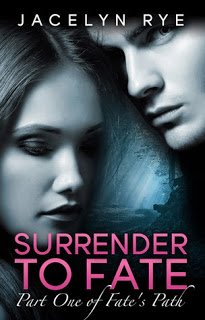 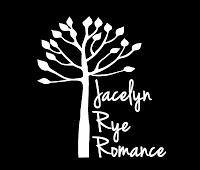 Jacelyn Rye is many things. She can be as alluring as the love that flows from her pen: pure, honest, simple. But then, like a storm that suddenly appears over the mountain, she can also have you running for shelter where there’s no place to hide. Like life, itself, Jacelyn delivers the hard with the soft, the pain with the joy, the instant with the forever. All of it, for a reason. And it’s there that one can best enter her life.

“I believe in signs, I believe everything happens for a reason,” she’ll tell you. If you know someone like that, you already know a primal piece of Jacelyn — a person who actually listens to the Universe because there, she knows she’ll find more than answers, she’ll find reasons. And those reasons give her insights about nature, and human nature, both of which she invites us to explore with her.

Growing up in the blue sky country of Colorado doesn’t leave an impression, it becomes a lifeblood. For Jacelyn, the clarity of that truth flows through her stories, her characters and her inherent spirituality that somehow knows faith, in the end, triumphs over despair.

Through her storytelling — firmly stimulated by that early country life that taught her to always be prepared when venturing forth — Jacelyn’s uncanny ability to “see” what could happen takes readers into a crystal ball where the future’s many possible outcomes await in a swirl of incandescence, right down to the details of smell, touch, fear, love.

Because life also presents its possibilities in dreams, Jacelyn holds dear that open door. “My dreams mean a lot to me. I listen to them, solve problems in them, learn from them,” she confides. It figures, then, that when you read her stories, you’d best get ready for a trip with an original dream weaver.

And then, there’s serendipity. To know Jacelyn is to accept a dance with chance. She accepted one such chance when she moved from her beloved Colorado to an unknown life awaiting her in Southern California, where she lives today. “I knew another beautiful world was out there. I was ready for adventure,” she says, with the confidence that proves her faith is more than just words. “I moved from Colorado as soon as I graduated from college, thanks to a great job offer. The night after I received my job offer, I saw a commercial that said, ‘California, find yourself here.’ In that moment, I stopped debating the move and took it as a sign that my adventure would be found in California.”

As Jacelyn does so well, she shares those adventures in her writing. In her first book series, you’ll find Jacelyn’s experiences of this major life change play out in Sarah, who also moves from Colorado to California. “What I’ve seen and felt enable me to write realistically about how a Colorado mountain girl feels about living in California.”

In the quiet mornings, you’ll find Jacelyn savoring her coffee, outside. To her, it’s all about listening, breathing in, appreciating being here for another day. And of course, there’s time spent in the mountains, fishing, wading in creeks with the people she loves. Curiously, this girl who comes from the mile-high mountains, still fears the miles-deep ocean she frequently visits, but only to sink her toes in the hot sand and watch, in awe and respect, the thundering surf.

On any given day, be it in the mountains, at the beach, or on her terrace, Jacelyn is dreaming and writing, her way of sharing something meaningful with those who come to know her.

One thing is for sure, wherever she goes, wherever she’s been, Jacelyn is aware and thankful for the gifts around her. Indeed, although she does not get back to Colorado that often, she’s there in spirit, and in absolute detail, in a moment’s call. “The smells, the sound aspen leaves make when the wind asks them to dance, how tall pines gently sway back and forth against a backdrop of the bluest blue I’ve ever known.” That’s someone who takes it all in, who takes it all with her, and who offers it to everyone who opens her books.