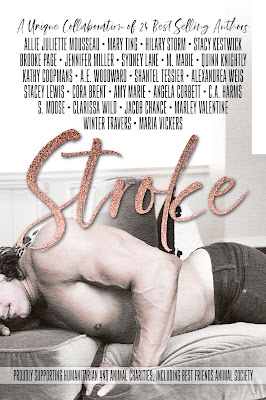 Two sexy, powerful brothers want me.
One is a perfect gentleman.
The other is rude, arrogant, and hates me.
Or does he?
MIA
Landing an interview with Stroke Magazine is a dream come true. That is until Trak Cohen, the co-owner of Stroke, boots me from the interview before it begins. He is an egotistical playboy, and I dodged a bullet. Then the unexpected: I receive a call from his brother, Trent, and I can’t turn down the position he is offering.
If only his drop-dead gorgeous brother would stop distracting me.
I will not become another notch in his belt.
TRAK
Being the co-owner of a popular magazine comes with its own set of perks, including an endless supply of beautiful women at my beck and call. Except for Mia, who was hired by my brother behind my back. I don’t like her attitude or the way I can’t get rid of her. Worse yet, all of that makes her more intriguing. We can’t stand each other, but we’re stuck with the situation for now.
I’ve almost convinced myself that I care nothing about her, but when Trent goes after Mia, I want nothing more than to steal her heart for myself.
I will win in the end. 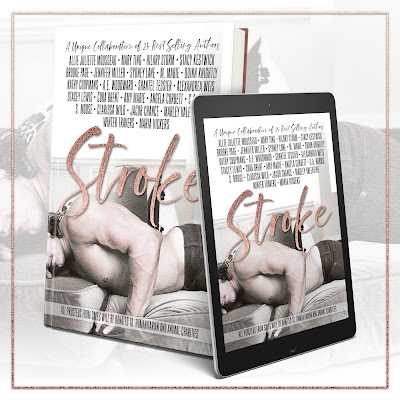 We are proudly supporting humanitarian and animal charities, including Best Friends Animal Society.

He laughed derisively. “Yeah, I think I can handle chin-ups.”

I adjusted the lights, and he got into position. I lifted the camera and waited for him to start. He just stood there, arms loosely gripping the bar above his head, watching me.

Finally, I lowered the camera. “Problem?”

He smiled slowly, wickedly. “Aren’t you going to oil me up?”

My jaw dropped a little, and I struggled to maintain my composure. “Do you really want to be greasy the rest of the day?”

He lifted a shoulder in a lazy shrug. “You can clean me up afterward. I have some baby wipes somewhere.”

I set the camera down carefully, needing to buy myself a few seconds to get my racing heart under control. Squeezing a bit of the oil into my hands, I started at his shoulders, smoothing the cool liquid over the breadth of his back, down his ribs to his tapered waist, and back up again. His skin was so warm, his muscles firm beneath my hands. I repeated the path about three times to make sure I didn’t miss any spots.

The fourth pass was just for me. When I rubbed his lower back, making sure to get all the way to the edge of his jeans, he shifted beneath my fingers, and his ass clenched beneath his denim.

Interesting. Maybe he wasn’t as indifferent as he acted.

Moving around to his front, I repeated a similar process, from shoulders to hips, my hands gliding over his pecs and between the individual grooves of his abs. His nipples hardened, and was it just me, or did his breathing seem a bit faster than when I started?

My hands made one last journey across his chest, and I lingered over his heart. Sure enough, it was pounding into my palm, although his face remained impassive as he watched me. I couldn’t hold his dark gaze, couldn’t risk him seeing how much touching him like this affected me, how I was having to squeeze my thighs together to resist humping his leg like a bitch in heat.

There was no doubt in my mind this was a test. It was whether it was personal or professional that I couldn’t puzzle out.

Licking my desert-dry lips, I rubbed the oil over his arms, my palms following the contours of his sizeable biceps and his strong forearms. His fingers clenched and flexed as I finished up, but that was the only motion he made.

I wiped my hands off on a towel and picked up the camera again, hoping he didn’t notice the slight tremor in the action.

“Ready?” I cursed the husky tone in my voice.

His eyes drifted down my tightly strung body before he met my gaze again. “Getting there, anyway.” With a wink, he began a slow series of chin-ups made more impressive by the obvious control he had over the speed.

Blinking out of my stupor, I reminded myself to focus.

Shadows, shapes, light, composition, angle. I concentrated on the task at hand, moving around him slowly to capture him from all sides. After three minutes, he paused to catch his breath between sets. “Having trouble? You’ve barely taken any shots.”

I snapped a picture of his heaving chest. “On the contrary, I know what I’m doing and don’t take a lot of wasted ones.”

He raised a dark brow. “Those are big words. Hope you can back them up with results.”

I allowed the camera to follow a drop of sweat that was slowly traversing down his abs, past his navel, down that sexy trail of hair leading to his jeans. My eyes lingered there momentarily. I wasn’t positive, but I’d swear there was more of a bulge there now than when I started.

Crouching low on the ground to get a shot or two up his torso, I could feel the heat coming off of him, smell the sweat mixing with his cologne. I zoomed in, getting the exact image I’d hoped for.

Satisfied, I stood up, but I must have moved too quickly because the room spun for a moment, and I lost my balance, reaching out to catch myself. My hand couldn’t find purchase on the oil-slick skin where it landed, and it slipped down his body, throwing me more off balance.

I’m not entirely sure how it happened, but I ended up with my face mashed against his chest with my lips inches from his nipple, my arm flush against his torso, and my hand pressed over his groin.

His arousal pulsed beneath my palm, thick and hard and hot.

I was so fired. 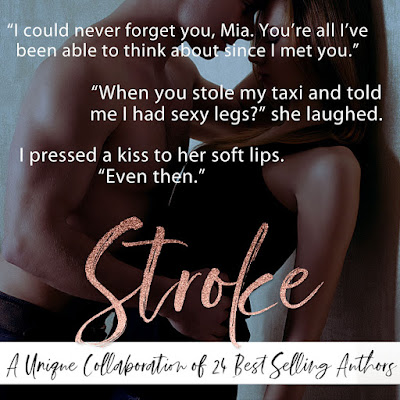 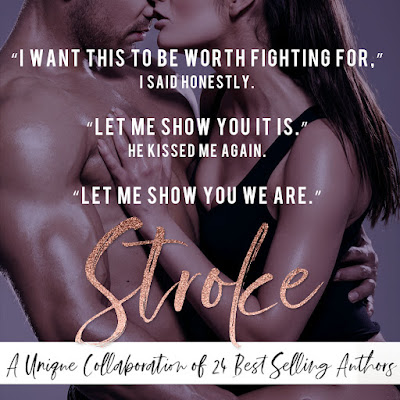 Stroke is a unique collaboration of 24 bestselling authors. Each chapter in this full-length novel is written by the following authors: