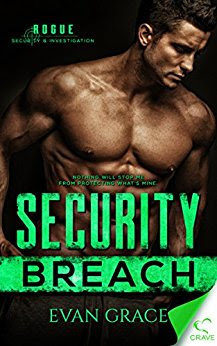 Security Breach:
It was only one night. One night, and I was sure I’d never see her again.
Fast forward six months and I’m staring into those same eyes. Only this time Delilah is my boss’s daughter. But the real kicker…she’s very much pregnant.
Now my only goal is to stand by her, protect her, and make sure my new family is taken care of.
But there’s a certain danger lurking in the shadows, threatening everything I hold dear.
I won’t rest until my family is safe. I won’t stop until I’ve annihilated every threat.
Delilah is mine. The child she’s carrying is mine…and I’ll be damned if anyone takes them away from me.
http://amzn.to/2oNU13T 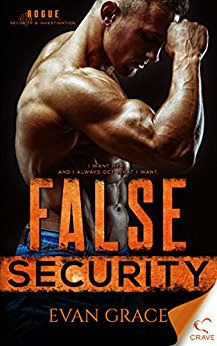 False Security:
It was supposed to be a harmless blind date—but it ended in a one-night stand when Shayla up and left in the middle of the night without a wink or a wave.
I didn’t think I’d see her again…until I walked into my office and met our new employee—none other than the curvy brunette who had rocked my world.
The more she fights the attraction between us, the more determined I am to make her mine. Not even the ghosts from her past have the power to stop me from wanting her.
There’s a threat hiding in the shadows, a danger whose only goal is to ruin Shayla. But I’ll go through hell and back to keep her safe from harm, to protect her. 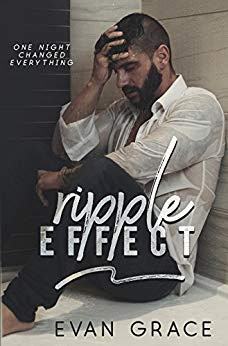 A second chance romance
With Brock, I thought we had a love to last forever.
Until the night it died a quick, tragic death, leaving me broke, and destroying my ability to trust another man with my heart.
Now Brock is back and after years apart it's time to face my past and finally get some closure, no matter how much I still love him.
With Ripley, I was getting the home I had always dreamed of instead of the home I grew up in.
I grew up in a home filled with violence and hate. Unlike my father, I vowed never to hurt the people I love. Until the moment I did just that. Now, I'm out of the military, returning home.
I don't expect to see Ripley and haven't laid eyes on her since that night, but even after six years, the feeling I have for her are still there.

It's time for me to face the demons of my past--the same demons that Ripley's been fighting this whole time.

Can Ripley forgive me, and even if she does -- will I be able to forgive myself for hurting the only person who ever mattered?

〰Amazon Author Page: http://amzn.to/2nulojT
Interview With Evan Grace:
1. Can you tell us a little about your books?
My books seem to all have one thing in common, and that's strong family units, whether it's family by blood or the family they choose.

2.  What inspires you to write?
Everything. Sometimes hearing a song can trigger an idea, or something in a TV show. Hell, I read someone's post on Facebook and that gave me an idea recently for a new duet I plan on writing :)

3. How many books have you written? Which is your favorite?
16 books, and I think my favorite is Ripple Effect. It was my first time self-publishing, and the entire experience was amazing.

4. For a reader who hasn't read your books yet, which book do you suggest they start with? Hmmm...Ripple Effect or Security Breach

5. Do you have a special time to write or how is your day structured?
I wish I was structured but I pretty much write throughout the day.

6. Do you have a favorite food or drink you must have nearby when writing?
While I write I love to munch on almonds, and drink coffee :)

7. Do you have a favorite spot to write?
Usually just at my dining room table.

8. If your fairy godmother waved her wand and whisked you away to the location of your choice, which place would you choose?
Bora Bora in one of those over the water bungalows.

9. What are writing projects are you currently working on?
I'm working on Rogue Security and Investigation book 3 and book 1 in a new series I'm working on.