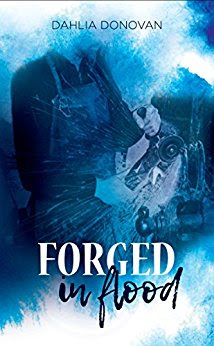 From best-selling author Dahlia Donovan comes a new witty novel between three very different men. With drama, emotional turmoil, and hilarious banter, be prepared to be swept away in Dahlia’s British M/M/M romance.

When one drunken night forever scars three best friends, will they ever find a way to pick up the pieces?

Eaten up with guilt, Ivan Black spends ten years hiding from the world. He retreats to his family forge to wallow in misery. Alone. So lonely his heart aches with it.

Wesley Cook and Rolland Spence have been together since university. They struggle through the physical scars of the accident, building a life in the ruins of their dreams. They find happiness but continue to miss their angry ginger Viking—Ivan.

In all the anger of wasted years, the three men find a way to forge a relationship as hot as the fires in the smithy.

Forged in Flood is a British contemporary M/M/M romance. With heartache, hot men with foul mouths, and plenty of heat, enjoy getting to know Ivan, Wesley, and Roland. 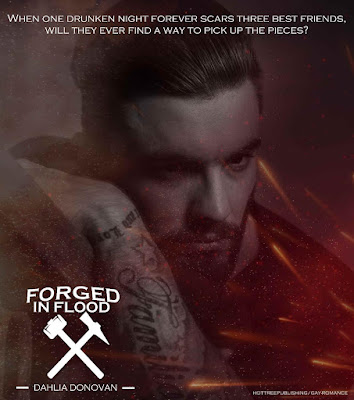 The Blacks of Boscastle had run the forge since before the sixteenth century. All the men and many of the women in his family had been blacksmiths by trade. Ivan had always felt particularly proud to follow in their footsteps. They’d worked through rains, wars, and plagues.
I’m not going to be the first to run over a spot of bad weather.
There was one major downside to everyone in the village having fled—there were no distractions. Ivan had far too much time on his hands to think. His mind went back in time to an event best left untouched. One dismal night, one massive car crash, and three young lives drastically altered forever.
He’d restricted himself to Boscastle and the smithy since then, promising never to take risks ever again. And he hadn’t, not really. His life had become incredibly boring and predictable.
Ivan gritted his teeth and slammed down the hammer in his hand to stave off the onslaught of memories. “Sodding rain.”
As a young man, Ivan and his two best mates had been the pride of their university. Rugby stars in the making; all three had already signed contracts to turn professional upon graduation. The offers hinged on them staying healthy and keeping their heads in the game.
One accident had ruined it for all three of them.
All my fucking fault.
Of the three young men, Ivan had gotten off easiest as far as long-term issues. He’d suffered a severe concussion along with cuts and bruises. The accident left him with memory problems, a short fuse on his temper, and blindingly painful migraines; his balance had also been greatly affected by the damage to his brain.
His mate, Wes, had the injuries that were most visible. His face, hands, and arms had been left covered with scars. He’d also lost the sight in his right eye.
The third of their trio, Rolly, had gone through multiple surgeries on his left leg. Even with the best care, it would never be the same. He’d walk with a limp for the rest of his life.
Three promising sports careers flushed down the toilet by one foolish mistake. Everyone consoled Ivan by reminding him that any of them could’ve been behind the wheel. They’d driven drunk a thousand times before and gotten lucky each time.
Their luck had simply run out. They’d taken their lives (and the lives of anyone else on the road) into their own stupid, drunken hands. The car had flown around a corner on a rain-slicked road and rolled several times before crashing into a tree.
For Ivan, his dreams going up in smoke hadn’t been the worst part. Not a day went by where he didn’t regret losing his best mates. Guilt, more than anything, kept him from trying to breach the gap and contact them.
He’d hidden himself away in Cornwall to avoid ever having to see either man again.
Fucking enough, you fuckwitted moron.
Beating yourself up won’t change anything.
Sod this sodding rain. 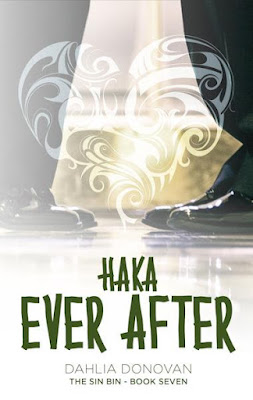 
Blurb:
You are cordially invited to the Sin Bin wedding of the year—kilts required, undergarments optional.
Taine Afoa has faced opponents on the rugby pitch without an ounce of fear. He hopes to find the same courage when asking the love of his life to marry him. First, though, he has to ask Freddie’s fathers for their blessing.
If Taine survives, popping the question should be a breeze.
Freddie Whittle knows Taine has something up his sleeve. A yes forms on his lips before the question is even asked. But can they survive the madness of friends and family, all wanting to help plan their wedding?
As their May-December romance tumbles into happily ever after, one surprise after the other brings them more joy than they ever imagined possible.
The short story Haka Ever After is the seventh (and last) book in Dahlia Donovan’s international bestselling gay romance series, The Sin Bin. Each one features hot rugby players and the men who steal their hearts. 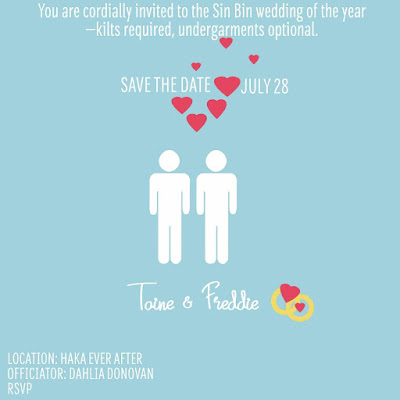 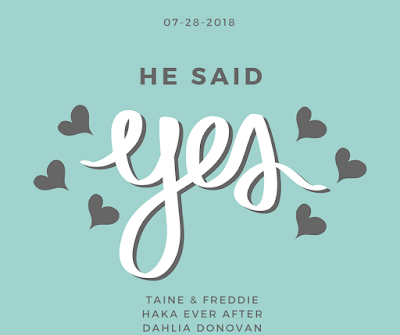 Excerpt:
“Will you stop laughing? How am I supposed to keep an erection when you’re giggling like a mad hyena?” Taine Afoa sounded serious for all of five seconds before he broke out laughing along with his lover, Freddie Whittle. “Shite. Untie me before I hurt myself.”
The two men had been together for a while now. They were opposites in size; Taine was practically a giant compared to the slight Freddie, a young nurse who’d fallen head over heels in lust and then love with the Māori-Scottish former rugby player.
Freddie tried. He really did. If he could’ve stopped laughing, he might’ve managed to do more than lie on the floor trying to recall how to breathe normally. “Coc y gath.”
“Don’t say I told you so—and stop calling me a sheep’s willy.” Taine ground out the words after several minutes of breathless mirth. “Bollocks.”
It had been his idea.
Why don’t you try tying me up?
Aren’t you curious?
Truth be told, Freddie wasn’t all that curious to have the restrained shoe on the other foot, but no matter how much he tried to convince Taine, they still wound up trying it anyway. A memorable mistake that he wished he’d gotten a video of it.
It started fine. Taine got up on the bed and rested on his knees. With quite a bit of fumbling, Freddie managed to get the larger man’s wrists and ankles secured. He’d stepped back to survey his work, and the fit of giggles had hit him almost instantly.
Why is this so funny?
Freddie had no idea what set him off. The giggling eventually morphed into full belly-shaking laughter. He ended up on the floor with his arm clutching his waist.
“Are you going to untie me?” Taine asked patiently. “Can you manage the knots?”
Freddie dragged himself up off the floor and began to slowly undo the knots to release Taine. “Uhm.”
“What’ve you done?” Taine craned his head around as far as the position would allow. “You bollocksed up the knots, didn’t you?”
“Maybe?” Freddie blushed from the tip of his toes all the way up to his ears. “Let me grab a pair of scissors.” 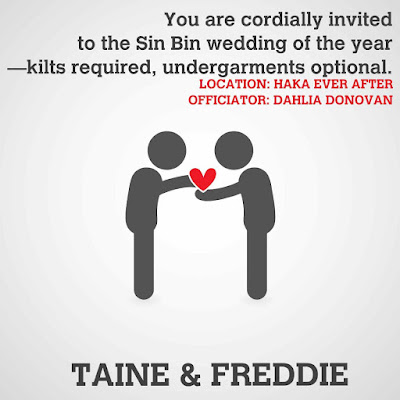 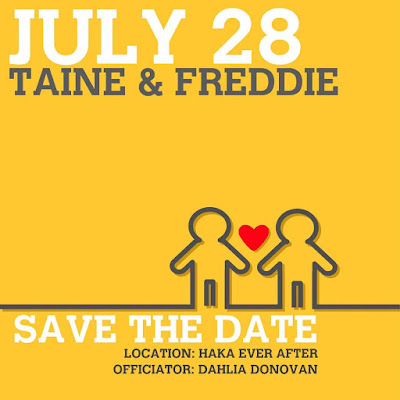 Dahlia Donovan wrote her first romance series after a crazy dream about shifters and damsels in distress.  She prefers irreverent humour and unconventional characters.  An autistic and occasional hermit, her life wouldn’t be complete without her husband and her massive collection of books and video games.