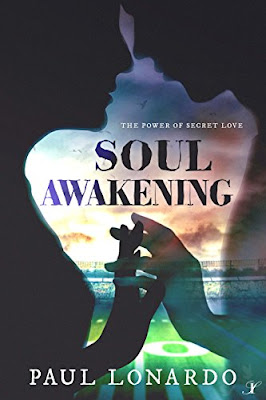 Buy Links: Kobo: https://www.kobo.com/us/en/ebook/soul-awakening-1
Amazon: https://www.amazon.com/dp/B06ZYSYNLW
Itunes: https://itunes.apple.com/us/book/id1229335927
Blurb:
Something otherworldly is happening in a small Texas town.
As a small Texas town mourns the tragic death of its high school football star, Alecia is struggling to adjust to life without the boy she has dated since sixth grade and thought she would be with forever.
When Braden comes to her as an apparition, she finds herself falling for Riley, Braden’s best friend and teammate. Has Braden returned to spy on her, or for some other reason?
Alecia’s not sure, but she soon realizes she must find a way to accept Braden’s death and welcome love back into her life, or risk losing everything.
The Power of Secret Love changes everything…
EXCERPT:
“Alecia.”
Her name had come out of Braden’s mouth countless times before in so many different inflections and every possible situation. This time, he spoke her name tentatively, almost warily, his tone unfamiliar even though it was clearly his voice. It had been about ten minutes after she’d gotten off the phone with Riley. She couldn’t sleep, and she was lying in bed, streaming some music on her phone.
“Alecia.”
She raised her head, and her eyes instantly widened. She lifted herself upright on the bed and gazed directly at Braden, who was standing in the middle of the room. She couldn’t believe what she was seeing. She didn’t know if she was awake or asleep at first. If she was dreaming, it was the most realistic dream anyone could ever have. If Braden was an apparition, then so was everyone else she’d ever encountered. Alecia had never seen a ghost before, but she would have expected one to have physical qualities that were vastly different from those of the living. This was Braden, in solid human form, not an ethereal manifestation or translucent likeness. He wasn’t floating in the air, his orange Nikes were planted firmly on the wood floor of her bedroom. His voice wasn’t accompanied by moaning, shrieks, or rattling chains.
It was uncanny. Not only was Braden here in the corporeal sense, he looked exactly as he would have if he’d survived the accident. His hair had been cut short the day before the accident. Now, however, it had almost two full weeks of growth. And while he didn’t have much in the way of facial hair, he was sporting a stubbly beard and mustache. It was a new look for Braden, and Alecia was not hating it.
Review by Gia:
I loved this one.  This one for me started out sad and I was hoping not to cry.   Alecia has lost her boyfriend, Brayden, in an accident.  She is grieving and so is his friend, Riley.  I really liked Alecia.  She's a down to earth girl.  She's going through a lot but she's not a whiny character.   Alecia begins to see and speak to Brayden.  I didn't real like Alecia's mom.  She wasn't always very supportive of Alecia.   Brayden comes to Alecia for a reason.   Soul Awakening is a quick sweet read.  I definitely recommend picking this one up.
5 Amazeballs Stars!!
About the Author:
Paul Lonardo is a freelance writer and author. He has had both fiction and non-fiction book published, including titles that have been excerpted in Reader’s Digest and reviewed in Publisher’s Weekly.
Soul Awakening is his third romance novella. Reunion of Souls was published by Liquid Silver Press in 2105, and last summer Wild Rose Press released Enchanted Desire.
From the Ashes, a collaborative book written with a Gina Russo, is a true story of her survival from the deadly 2003 Station Nightclub fire in Rhode Island which claimed the lives of 100 people, became the basis of a 2013 documentary web series, The Station, which Paul produced.
Paul has been interviewed as part of several documentaries, including NBCUniveral’s I Survived a Serial Killer, featuring the true crime story depicted in the book  Caught in the Act, A Courageous Family’s Fight to Save their Daughter from a Serial Killer.
https://www.goodreads.com/author/list/734960.Paul_Lonardo
https://www.amazon.com/Paul-Lonardo/e/B000APQ0Z4/ref=dp_byline_cont_ebooks_1
https://www.facebook.com/RIAuthor/
Posted by Gia Guido at 8:55 AM