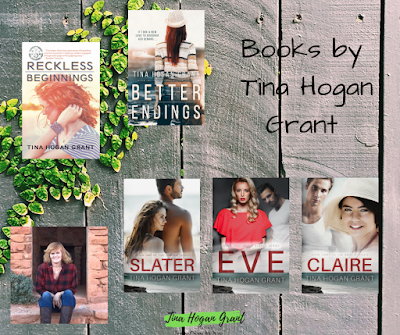 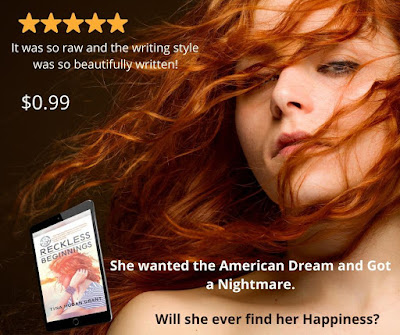 RECKLESS BEGINNINGS -
A sister that runs away and simply vanishes
A forbidden love affair
Turmoil between a father and daughter
An eviction with nowhere to go
A dark secret
Lies and deceit
Drugs, abuse & violence
Hope

Tammy Mellows, a fourteen-year-old native of England, was shocked when her father and troubled older sister, Donna, moved to the States.
With her family now separated by divorce and divided by an ocean, Tammy felt helpless when she learned Donna had run away and couldn’t be found.
Thanks to her father insisting she stay behind in England to finish school, Tammy could do nothing for the next three years but pray that Donna would be found safe.
When Tammy’s lifelong dream of moving to the States was finally fulfilled, she had high hopes of looking for Donna. But with no leads and faced with turmoil in her own life, there wasn’t much Tammy could do.
After a forbidden secret love affair and a catastrophic dispute with her father, Tammy eventually meets Steven, settles down and has his child, only to discover he is a heroin addict. Thrown into a life of drugs and violence, Tammy lives in fear of what Steven might be capable of and struggles alone to provide for her young son.
What consequences might she face if she leaves Steven? Is she ever going to find her sister alive? Will she have enough courage to conquer the impossible challenges of her twisted world and still come out on top? 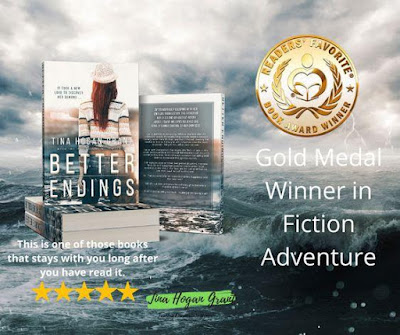 BETTER ENDINGS -
A woman embarks on a journey of redemption and discovery in this heart-warming tale of love, strength, and the sea...

…the sirens call of the sea.

Will Tammy’s adventure change her life?

Tammy Mellows has her demons... A single mother who overcame abuse, violence, and dependency, she now finds herself struggling against addiction. And when a drunken car accident leaves her in debt and in trouble with the law, it almost breaks her.

Will the shame eat Tammy alive?

When he walked into the restaurant, she noticed him immediately. Admittedly, it was her job, but Dwayne seemed nice. They hit it off.

When he asked her out, the date was for her and her son.

A commercial fisherman, he wants to show her his boat. Tammy had no idea how her life would change after that date. The tranquility of open water had its hooks in her.

What she decides to do next…

…makes all the difference.

You’ll adore this second book in the series because Tammy needed a second chance and through her own grit, she made one for herself.

A sweet second chance romance packed with action, adventure some laughs and suspense. 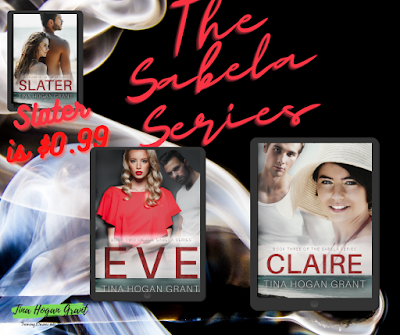 THE SABELA SERIES
SLATER -
How far would you go?

Sabela and her ex-boyfriend had always agreed that their relationship would never be permanent. Think of it as a friendship with benefits. So when Davin left for University, they parted on good terms.

Or, so she thought.

When she starts seeing another man, Davin changes the rules and insists she leaves San Diego and joins him in Texas.

Sabela quickly learns that "no" has dire consequences.

Davin's jealousy weaves a web of lies and blackmail to make her obey. Will she dare to not comply?

Sabela's new love interest, Slater, has loved and lost before. He's determined that no one will ruin his second chance at romance with Sabela. But how far is he willing to go to keep Davin's psychopathic grip out of their lives?
mybook.to/slater
EVE -
Keeping secrets will isolate you.

I couldn’t wait to become Slater’s wife and was anxious to begin planning our wedding.

After recovering from the horrific situation with Davin, everything was finally falling into place.

Until Eve showed up—a woman from Slater’s past he had refused to talk to me about.

When Eve gave little explanation on why she had left, I questioned her sudden reappearance. Why now? And what was she hiding?

Then Eve made us an outrageous offer, and though I felt threatened by her presence and was now unsure of my future with Slater, it was one that would be hard to refuse. Even if it jeopardized everything we had worked for.

Worse yet, if the secrets she held close were revealed, could our relationship survive them?
mybook.to/eve
CLAIRE -

Twenty-four-year-old Claire Hanes had never experienced love before and doubted she ever would.

Estranged from her parents and her older brother, Claire lived a lonely life. She dug herself into her work as a dental x-ray technician. With her independence, she could handle anything life threw in her direction.

However, things took a surprising turn when she found herself helpless and broke. With no one and nowhere to turn. That was until a special someone walked into her life.

Travis Kent came at an unexpected time in her life; it became complicated. A relationship had formed. Claire feared it would end as quickly as it started.

Before the subject of love even came up, he asked her for the one thing she knew she could never give him.

It was a brutal reality, one that left Travis devastated.

Will their love conquer all? Or was this the one thing that would tear them apart?

mybook.to/claire
About Tina Hogan Grant:
Award-winning author Tina Hogan Grant was born in England and moved to the States in 1979. After moving to California, she became a commercial fisherwoman and spent ten years fishing off the southern coast of California with her husband Gordon. After retiring from fishing, they moved to a small mountain community in CA and spent the next ten years building their dream home, doing most of the work themselves.Grant enjoys writing suspense romances, stories with strong female characters who know what they want and aren't afraid to chase their dreams.Favorite quote: "There's no such word as can't "When Grant is not lost in her world of writing she enjoys riding ATVs, hiking and discovering new trails, and going on long road trips.Grant's book Better Endings won a gold medal award for Readers' Favorites Best Fiction Adventure 2020
Grant has written books and her sixth is due to be released in  January 2021.
SOCIAL MEDIA LINK
https://linktr.ee/tinahogangrant

1. Can you tell us a little about your books?
I first had the idea for my debut novel Reckless Beginnings over thirty years ago. It's based on my life and shows the flipside of addiction and how it affects the loved ones of addicts. Something you don't hear about when it comes to the war on drugs. This is one woman's fight to gain back her life when she finds it is in turmoil while being dictated by an addict. It is a story about hope and a realization that one does not have to Seattle, we all have choices.
Better Endings is a continuation of Tammy's Story- it is an adventurous, sometimes funny romance that takes place on the high seas when Tammy enters the word of commercial fishing and joins a lobster fleet, and pushes herself to the limits to be accepted by the fleet.
The Sabela Series, is a sexy suspense romance featuring strong women that know what they want and are afraid to show it. It's suspenseful with many twist and turns and many times it will stir up those emotions that we forget we have.
2. What inspires you to write?
I've always loved to write and my father was an author. He was my inspiration. I decided to write the Tammy Mellows Series because of the strong messages each book delivers, Hope, Chasing your Dreams, and not quitting, The Consequences of Procrastination.
3. Do you have a special time to write or how is your day structured?
I do not have a structured time to write but I do have a daily goal which is to write a minimum of 1000 words a day - most days I succeed. I may break the word count up during the day depending on what I might be doing on certain days but my day doesn't end until those 1000 words are written.
4. When you develop characters do you already know who they are before you begin writing or do you let them develop as you go?
I know nothing about the characters except their names and sometimes that may change as the character develops. I get to know them just like the readers do and it's one of the fun things about writing. I just love it. For example. My next book in the Sabela Series will be Jill. I have not started it yet. Jill was a secondary character in the first two books and now she is getting her own story but I have no idea what her story will be. Jill will let me know as I begin to write. I only know a few things about her from the first two books. I know she is high maintenance, she drives a pink mustang and she was Travis's ex-girlfriend. Jill will have to fill me in on the rest and I'm excited to find out.
5. Do you have a favorite food or drink you must have nearby when writing?
I'm British and even though I've been in the states for over thirty years I still must have my afternoon tea every day and while I'm writing. I rarely eating snacks while I'm writing.
6. If you ever experience a case of writer’s block, how do you cure it?
I don't dwell on it or try and fight it. I simply walk away and usually take my dogs on a nice long hike, kayak if the weather is nice, or go for a ride on my quad. I remove myself completely from the book and erase or frustrations. Normally when I return I have a clear head and I'm ready to write again.
7. If you had a superpower, what would it be?
Hmmm- what fun that would be. I would have to say a power that allows me to be invisible - Oh I would have a blast with that one and would have so many stories to tell lol
8. What writing projects are you currently working on?
I'm happy to say The first draft of The Reunions, Book three of The Tammy Mellows is finished and I'm now working on the rewrites and polishing it up before it goes to the editor on November 1st. My next project will be Jill, book four of The Sabela Series.
Posted by Gia Guido at 9:00 AM