Relic Hunters, is a Young Adult adventure series, drawing on the myths and legends of different time periods and blending them with thrill-seeking action in the modern age.

'Relic Hunters is what you'd get if you combined the young James Bond series, Indiana Jones and National Treasure. It's a YA adventure that you won't want to miss!' Goodreads Reviewer.

There are currently four entries in the Relic Hunters series, beginning with book one Eagle of the Empire and currently ending with book four, Blood of the Dragon. Each entry follows 17 year old Adam Hunter and his team of treasure hunters from the British Museum as they search for and protect ancient, and often powerful artefacts from history and mythology. Each entry in the series covers a different era, with the Roman Empire, Ancient Egypt, the Second World War and the Ottoman / Wallachia Vampire legend covered so far. In each entry the historic story of the relic is also told, be it through the eyes of a Roman Legionary, an Egyptian Queen, a British soldier and lastly Vlad the Impaler (the origins of the vampire / Dracula legend).

The latest entry, is an anthology collection that chronicles how the members of the British Museum team were recruited. Relic Hunters: Origins of the Hunters is due for release on 1st December 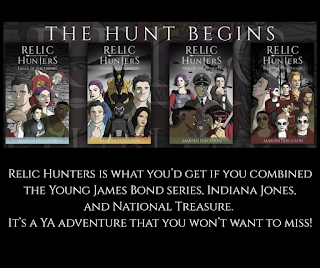 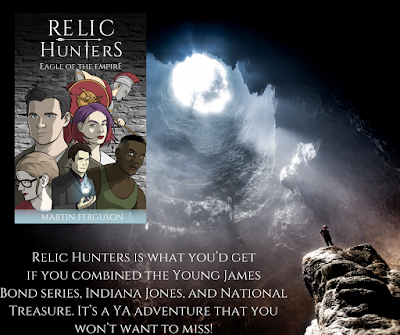 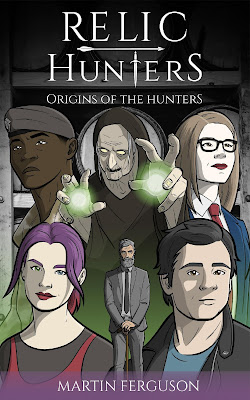 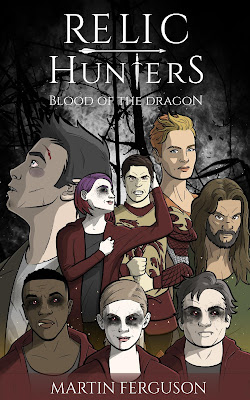 About Martin:
I live in Norwich, England and am currently working on the young adult adventure and historical series 'Relic Hunters'. Inspired by the myths and legends my parents told me as a boy and with the help of my ever-suffering wife, a teacher and history graduate, 'Eagle of the Empire' was the first entry in the 'Relic Hunters' series.
When not writing, I am training or at least planning my next challenge. Following a serious knee injury, I was told by surgeons never to run or play sports again. Stubborn and reckless, much like the characters in my writing, I have not listened and have completed the Three Peaks Challenge, the Great North Run, the Greater Manchester Marathon and the London Marathon.

Interview with Martin:
1. Can you tell us a little about your books?

My books are the Relic Hunters series. Relic Hunters, is a Young Adult adventure series, drawing on the myths and legends of different time periods and blending them with thrill-seeking action in the modern age. The adventures are focussed on 17 year old Adam Hunter as he joins a specialist team of treasure hunters and sets out to uncover the greatest myths and legends of our world.
2. Do you have a special time to write or how is your day structured?
My day isn’t structured at all! I have a day-job, working for the NHS (National Health Service). I also have waiting for me when I come home a manic, hyper 3 year old daughter and a baby boy (born 2nd May). I write during any small window I can find – be it a lunch break, a midnight feed or during the early hours when I really should be sleeping or going out for a run.
3. Do you work with an outline, or just write?

I have to stick to an outline for one simple reason, i have an absolutely terrible memory! If i just wrote i would forget complete chapters, characters and half the plot! This sounds a bit boring, but to be honest planning an outline is one of my favourite parts of the writing journey - coming up with and making changes to the plot, characters and themes 1,000 times before settling on the final idea.
4. How do you come up with your characters' names?
Character names and books titles are without a doubt the hardest part of writing. I have pages of lists of random names that i have come across in life and liked in case i think of a character that would suit. Names constantly change whilst writing too...and during the editing process as well...in some cases within a day or two before release!
5. If you could be friends with one of your characters, which one would you chose?
Probably Adam, the main protagonist of the Relic Hunters series. Adam travels the world hunting down lost treasures and getting into all kinds of trouble along the way - who wouldn't want to be friends with him and get caught up in one of his adventures.
6. Do you have a release day tradition?

Not really, apart from dosing up on caffeine and posting about the release in every media option and as many times as I can!
7. If your fairy godmother waved her wand and whisked you away to the location of your choice, which place would you choose?
That's a tough question. At the moment, in the midst of the Corona Virus pandemic, i would say anywhere! When i began writing the Relic Hunters series i liked to visit the locations that i would feature in the books. The next two entries in the series take us to Greece and that is somewhere i have wanted to visit for a long time. To see the settings for the great Greek myths, the trials of Hercules, the Trojan War, the many tales of the Gods and Goddesses of Mount Olympus, that would be fantastic.
8. What writing projects are you currently working on?
I am working on book six in the Relic Hunters series. That’s right, that wasn’t a mistake. Although book four came out earlier this year, I have already finished book five and am a decent way through book six.  Release date for both will likely be next year, as book six needs to be finished before book five can be released (all will be revealed in time). Outside of Relic Hunters i have also started work on a YA fantasy book as part of a co-op project with several other writers. Again i cannot reveal too many details at the moment, but wheels are certainly in motion.
Posted by Gia Guido at 9:00 AM