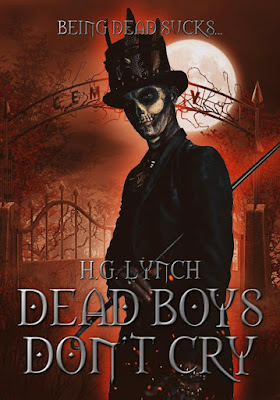 Dead Boys Don't Cry
Genre: YA Paranormal Thriller
Blurb:
Dying was only the beginning.
Antonio is sick of his mother's drunken, abusive boyfriend, and when Dave starts acting strange following the disappearance of a young woman, Antonio suspects he's responsible. But when he confronts Dave about the missing woman, Antonio finds himself facing down the barrel of a gun. Waking up dead was not part of his plan. With a Reaper at the gates and a gravestone at his back, he'll risk his afterlife to catch his killer.

I heard him coming, and I clenched my fists. The movie I’d been watching became a buzz in the background as I listened to the keys scraping against the front door – he was so drunk he couldn’t get the key in the lock, as usual.             At the dining table, Mum started to get up, laying her magazine aside. I rolled my eyes, wishing she would leave the dumb bastard to struggle. Maybe he’d give up and go sleep in the gutter.             The lock finally clicked, and the door opened with the same old whine of hinges that had been driving me nuts since we moved into this shithole six years ago. No matter how many times I oiled it, it still whined like a sad puppy.             Mum sat back down, a smile plastered on her face. “Hey, honey,” she said as he stumbled in the door, bringing with him a fog of alcohol fumes that made my eyes burn.             He grinned sloppily at my mother. “Estella! You look beautiful ton-hic-tonight!”             Mum fluttered a hand self-consciously around her hair. “Oh, but I’m not even wearing my make-up,” she protested humbly, as she always did, even though she knew she was an attractive woman for her age. She’d been pretty when she’d been younger, and her youthful charm had settled into mature lines.             Dad had always told her she was beautiful. But not in the sloppy, drunken way this buffoon did. Dad had said it because he meant it, because he loved her. Unlike the man before me, whose beer goggles would have convinced him a lamppost was worth a shag.             Coming around the table, Dave bent to kiss Mum, and I looked away, disgusted. I tossed the TV remote aside and stood up, preparing to leave the room.             “Where d’you think you’re goin’, boy?” Dave’s slurred voice froze me on the spot. I knew that belligerent tone in his voice. It meant he’d decided he didn’t like my face tonight, or the way I walked, or the t-shirt I was wearing.             It meant I was probably ending up with another bruise tonight.

About HG:
HG Lynch is a Scottish author of Young Adult Paranormal novels and short stories, who lives in a tiny village in the East of Scotland with her boyfriend and three adorable bunnies. She's currently studying a HND in Animal Care, and writes in her free time. While most of her books are aimed at the YA market, she has a few naughtier adult works too.
Social Media:
Facebook: https://www.facebook.com/authorhglynch
Twitter: https://www.twitter.com/HGLynch
Website: https://www.authorhglynch.com
Interview with HG:
1. Can you tell us a little about your books?
Most of my books are young adult paranormal romances with badass heroines capable of taking care of themselves. I've written everything from vampires to werewolves to dystopian zombie books, from Fae fantasy to a raunchy adult incubus novel to Day of the Dead themed novellas. There's a little bit of something for everyone's tastes.
2. How many books have you written? Which is your favorite?
I've actually lost track of how many books I've written, I think it's about 27 now including short stories. My werewolf romance trilogy, the Caged Trilogy, is my best reviewed, with a lot of people saying they couldn't flip the pages fast enough, but my first series, Unfortunate Blood, will always have a special place in my heart.
3. How do you come up with your characters' names?
I like to choose names that are maybe a little quirky, or rooted in Celtic language, like Ruairidh and Islay of my demon hunting romance series, the Reaper Born Trilogy. Baby name sites are also a big help.
4. Do you work with an outline, or just write?
Mostly, I just write - sometimes I have a vague outline of a few scenes I'd like to incorporate, but the characters really tell me how to get there and sometimes they go completely off the rails!
5. Do you have a favorite spot to write?
I used to be able to write anywhere, and I mean, anywhere - I was often told off in class for writing novels instead of doing my schoolwork - but these days, I like to write in my bedroom, snuggled up in some blankets. Often I'll have music playing to get me in the mood for the scene I'm working on - I'm an unashamed Nickelback fan in particular.
6. If you could be friends with one of your characters, which one would you chose?
Oh, that's a hard one. i write a lot of badass women that I'd love to hang out with, but truthfully, Sherry of my Unfortunate Blood series is heavily based on my real best friend, so I'd have to say her.
7. If your fairy godmother waved her wand and whisked you away to the location of your choice, which place would you choose?
Real Location? Probably Madagascar, for the wildlife. I have a fascination with Darwin's theory of evolution, and how it impacted the way animals evolved on islands like Madagascar. Fantasy Location? I'd love to be part of the Shadowhunter world from Cassandra Clare's Mortal Instruments series.
8. What writing projects are you currently working on?
I'm working on a few things, including a New Adult spin off trilogy of my Unfortunate Blood series - I'm currently doing edits on Eternal Blood, book one of what will be the Eternal Trilogy. I'm also working on another UB spin off, based on a side character from that series - a bisexual kitsune called Hiro. So far, his story is really interesting and beautiful. I also have the final Reaper Born book to finish, and there's a secret project I'm about a third of the way into but I can't reveal many details as of yet.
Posted by Gia Guido at 9:00 AM