Release Blitz for Taking the Fall by Kally Ash 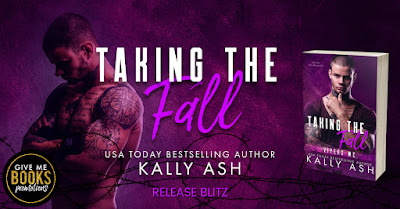 Sent to prison for a crime he didn’t commit...

Nick Sobolev is finally a free man. After wrongfully serving five years behind bars, all Nick wants to do is keep his head down and his nose clean. But when he meets the mysterious and very beautiful Alexis Cross, he finds himself being drawn back into the life that landed him in prison in the first place.

Alexis Cross is trying hard to escape her father and his influence, but in a city like Detroit, there’s no way to avoid either. When her past violently collides with her present, it shatters her long-held belief that she’s finally gaining her independence, plunging her into a dangerous game with equally deadly consequences.

I was a dick for even contemplating what I was going to do to Alex’s willing and pliant body. She perched herself on my lap, the hint of skin she was showing me mouthwatering. It took all my self-control not to tear the towel from her body and take her.
Still, her words were dancing around the inside of my skull: I’ve stripped myself bare for you, Nick. Will you make love to me now? She had stripped herself bare. She had given me the raw, undiluted truth of her broken life and I still hadn’t given her a shred of truth of my own. My own truth would ruin her, so instead of spilling all my secrets, I reached up and parted the towel a little more.

Her skin was smooth and unblemished, so different to my own chest covered in ink and scars. My eyes drifted down further to where the towel now pooled in her lap. Placing my hands on the smooth expanse of her exposed skin, I tightened my grip a little, watching in fascination as her eyes fluttered shut with the sensation. I inched my fingers higher, her skin heating under my touch.
She made a small strangled sound and I glanced up to see her mouth parted. Her eyes were hooded, her desire for me an intoxicating mix. I held on to the reins of my self-control though. Alex wasn’t weak, but there were certain aspects of her that were still fragile. I knew enough about her to recognize that.
Sweeping my thumbs higher still, I reached the tops of her thighs, her pussy. She made that same little noise as before, but this time, her hips rolled forward, chasing my touch.

Kally Ash is a contemporary romance author whose passions include curling up with a good book, devouring chocolate and getting kitty cuddles. Tempt Me is her debut novel, and the first book in a three book series. Some of her unicorn authors include Sawyer Bennett, Elizabeth Hayley and Haley Jenner.