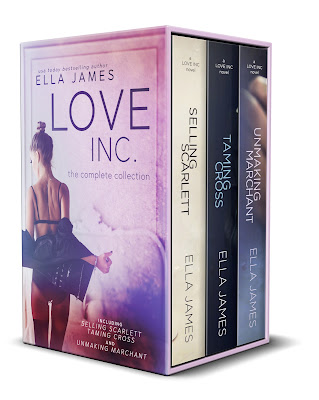 Get all three internationally bestselling Love Inc. novels in a bundle for the first time ever. This is a limited-edition box set available only for a few weeks, in celebration of the upcoming re-release of Something Blue, the final book!

Elizabeth DeVille doesn't belong at a party like this—one where the gowns cost more than her Camry and cigars run higher than her grad school utility bills. Dragged out of seclusion by her best friend Suri, Elizabeth is merely playing dress-up, rubbing elbows with a crowd that banished her troubled family years ago.

Hunter West is tired. Tired of parties, tired of pretending, and tired of trying to right a wrong that haunts him every day. Bourbon heir and professional poker player by day, by night Hunter is gambling with his life in a high-stakes game of crime and blackmail.

When Elizabeth stumbles into Hunter's den of vices, she's a light in the darkness, a flame in the void. And, just like everything he touches, Hunter mars her in a record time. To rectify the damage done, Elizabeth needs money she doesn't have, and she's come up with a foolproof way to get it.

Follow Elizabeth—code-named Scarlett—to the lush Nevada brothel where she'll auction her virginity and risk the only thing that's not for sale: her heart. The highest bidder is a familiar face, with wicked hands and the devil's mouth. And a secret so dark that it could cost her life.

For twenty-three years, Cross Carlson was a playboy. You know the type. Tall, dark, and wealthy. Blue-eyed. Charming. He seemed to have it all so easy. But Cross was harboring a terrible secret - one that helped ruin the life of an innocent girl and almost ended his own.

Finally out of the hospital, Cross is flailing, scarred in both body and mind and stifled by the weight of the secret he still keeps. The only way to absolution lies in a Mexican convent, and going there could cost him everything.

If there's anyone who knows what it's like to screw up big time, it's Meredith Kinsey. Just a few years ago, Merri was an ordinary girl with a job at her college newspaper and white picket fence kind of dreams. Now she's holed up in a Mexican convent, hiding from a drug lord who thinks he owns her.

What happens when the only way out of hell is with the son of the man who put you there? They say love conquers all, but does it really?

Marchant Radcliffe, owner of the exclusive Love Inc. brothel, is no stranger to darkness. He lost his parents in a plane crash and since college has harbored a secret almost too terrible to bear. He keeps his head above water by pouring his energy into his business--and he's thrived, despite the dark blot on his soul.

Then, after ten years of good fortune, Marchant's skeletons start to peek out of the closet, tossing him down a trail of ruin that begins with arson and could end with murder. Because he's kept his struggles private, he has no one to pull him back from the brink.

After a breakup with her longtime fiancé, Suri Dalton has nowhere to go except her BFF's new penthouse in Las Vegas. The last thing Suri is looking for is a man, but after drowning her woes in wine on the flight over, she stumbles into a torrid make out session with a beautiful stranger--who just so happens to be Marchant Radcliffe, playboy and literal pimp.

What happens when what you see isn't what you get? What do you do when destiny is too alluring to resist and too dangerous to survive? 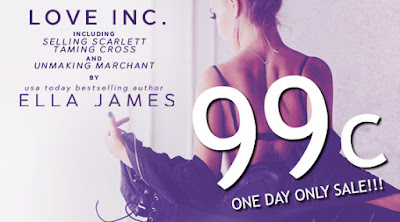 Ella James is the USA Today bestselling author of fourteen teen and adult romance novels. She's a Southerner who came to Colorado and can't say goodbye to the mountains, despite missing sweet tea, the Gulf Coast, and good barbecue.

Ella is raising two children who will probably grow up believing many untruths about everything from dragons to the necessity of wearing shoes.