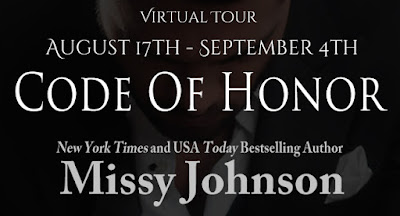 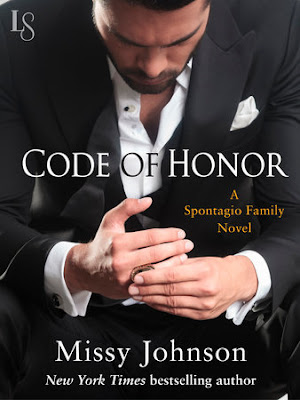 In a series debut for fans of Tracy Wolff and Sylvia Day, New York Timesbestselling author Missy Johnson asks a burning question: What happens when love is undeniable—and taboo?

Pietro Gustovi is loyal, polished, and hard as stone, the kind of guy women want and men respect. At twenty-three, he’s survived tragedies that would break men twice his age. And he owes it all to his father’s closest friend, Giovanni Spontagio, who took him in as an orphaned teenager. Pietro would give his life for Giovanni . . . but his heart belongs to Giovanni’s daughter.

Raised in Chicago under the spotlight of power and privilege, Lucy Spontiago feels most alive on stage. Determined to become a prima ballerina, she escapes her father’s protective gaze long enough to audition for the ballet in New York City. Soon, however, Lucy realizes that she is not alone. Pietro is watching her back. And though he’s like a brother to her, Lucy cannot deny the thrill she feels knowing his eyes are on her.

Pietro could never betray his mentor by sleeping with his only child. But Lucy follows her passions, no matter how forbidden. Soon their nights are consumed by explosive, red-hot temptation—a dance that will expose shocking secrets and burn everything else to the ground.

It’s been nine days since my world collapsed. Exactly 214 hours since I lost everything. I remember every tiny detail about that day. I remember leaving the house that morning to the smell of freshly brewed coffee. My mother was already up and preparing a feast for supper that night. We were going to be celebrating, but they wouldn’t tell me what, and, as it turned out, I’d never know.

I remember joking with my father along the way to school about how I’d soon be old enough to do more in the family business. I remember arriving home just like every other day, only this time I was fifteen minutes later than usual after stopping off to buy a comic.

It turns out that fifteen minutes probably saved my life.

As I walked toward my house, I noticed a strange car parked in our driveway. Then I heard the shouting. Right away, I knew something wasn’t right. My mother’s voice rang out, terrified. I’ll never forget that sound as long as I live. Thinking fast, I’d crept up the side of the house to peer through the window, and what I saw will haunt me forever.

The sound of the bullet firing through the air ripped through my soul. I watched helplessly as my mother fell to the ground in a heap, blood pooling around her lifeless body. Her head was twisted, her eyes staring at me; only I could see it was too late.

I’d screamed, and for a split second, the killer’s steely brown eyes met mine before he ran out the front door and sped away in his car. I panicked and ran inside, where I found my father surrounded by blood in the hallway.

My attention snaps back to Giovanni, his voice pulling me out of my memories. My heart pounds as I try to focus on where we are. We’re parked in front of a sprawling mansion, bigger than any home I’ve seen before. I fixate on his kind gray eyes, trying to will myself to be strong, because men don’t cry. I’m fifteen now. I’m a man. And all I can think about is how disappointed my father would be if he saw me crying.

“This is where you live?” I mumble, pretending to care.

“This is where we live,” Giovanni corrects me. He sighs and reaches for his seatbelt, unclasping it. “Right now it may not feel like it, but you’re not alone, Pietro. I told your father many years ago that I would take care of you and I meant it. This is your home now. My family is your family.”

“Thank you. I appreciate it,” I say, the words sticking in my throat. I stare down at my hands in my lap, wishing I didn’t have to put on this front. I want to yell and scream, show the world how angry I am, but instead I hold it all in.

“Your father was a good man,” he adds, his expression solemn.

I find that hard to believe.

I knew little of what my father did, only that he had many enemies and many of his ventures were illegal in one way or another. Just like all the men in my family he’d been strongly involved with the Italian Mafia. I was too young to fully understand what that meant, only that it nearly always ended in death. What did that mean for me? Was I expected to try to carry on the Gustovi name? To imprint myself in my father’s world? I glance back at Giovanni. Can he tell how afraid of my future I am?

We get out of the car and I follow him inside, glancing around the huge entrance. Beautiful high ceilings and expensive décor catch my attention. It reminds me of a museum I visited the previous year for school. I shuffle my feet, almost scared to move, in case I mess something up.

My eyes dart toward a huge spiral staircase when I hear a feminine voice sing out. A young girl, maybe a year or two younger than me, floats down the stairs, her long dark hair hanging in waves behind her. She’s beautiful. Her flawless, silky skin radiates warmth and highlights her beaming smile.

“Daddy, I missed you,” she says, wrapping her arms around Giovanni. He laughs and lifts her up, planting a kiss on each of her cheeks. I find myself smiling at them, but inside I’m jealous of how close they are. I used to be close like that with my parents.

“And you must be Pietro,” she gushes, her bright eyes smiling. I’m taken aback by her warmth. She steps closer and throws her arms around my neck. I step back, both surprised by her attention and embarrassed at how my body reacts to her close proximity. I’m a fifteen-year-old boy and she’s beautiful. How could my body not react?

“Pietro, this is my daughter, Lucia.” Giovanni beams, and I realize he has the same wide smile as his daughter. He leans over and touches her face. “She’s been looking forward to meeting you.”

“I have,” she admits, her eyes lighting up. Her enthusiasm is infectious and I find myself smiling back. “Father doesn’t approve of most of my friends, so as you can probably tell, I’m very bored.”

“Lucia, we talked about this,” Giovanni mumbles. “When you can show me your friends are responsible enough not to go out all night drinking and taking drugs I’m more than happy to let you see them.”

“One time, Father. They were caught drinking one time!” I grin as she throws her hands up in frustration like a true Italian. I’m drawn to her fire and her passion. “Besides, I have seen some of your friends knock back a few drinks,” she grumbles.

“Last time I checked, my friends are not underage,” he fires back. He raises his eyebrows, suggesting that is the end of the conversation. Lucia shuts her mouth, her eyes narrowing as she shakes her head dramatically. Giovanni turns to me and pats me on the back. “Let me show you to your room, Pietro. I’m sure you must be tired after your long flight.”

“That would be good,” I say, throwing another glance at Lucia. “I could probably do with a nap.”

He takes my suitcase and starts up the stairs. I hurry to follow him, not wanting to make him wait. It’s like a light switch has been flicked in my head and I’m beginning to realize how lucky I am. Fifteen minutes earlier that horrible day and things could’ve turned out so differently. I wouldn’t be standing here, with a second chance at living my life.

But none of this changes the fact that someone took my parents from me. They’re gone and nobody other than me seems to care about finding who did this, not even the police. I thought of all people, Giovanni would be someone I could count on. Maybe he is, maybe he isn’t.

Someone will be held responsible.

I don’t care how long it takes me, I will find out who did this.

And when I do, I’ll make them pay.

Review by Gia:
At fifteen Pietro's parents are killed and he is relocated to the United States.   He lives with his father's friend Giovanni.   Giovanni has a daughter Lucy who is a couple of years younger than Pietro.  There is some chemistry between them but they never act on it.

Lucy as an adult still is treated like a child and under the watch of her father.  She goes off to New York to preform in the ballet.  Pietro is not far behind and is sent to watch her.   When they are no longer under Giovanni's roof sparks fly between them.  Pietro is conflicted about his feelings for Lucy and his duty to her father.

Pietro is also is trying to find out who killed his parents.  I'm pretty sure people around Pietro know more than the will tell.   Giovanni has to be a an okay guy to take in his friend's son but I'm really not sure of him.  Giovanni is definitely a mystery man and I wonder what he knows about Pietro's parents' death.  Dangerous comes knocking when Pietro keeps looking into it.

Code Of Honor is a great read.  It has romance, suspense, and mystery.   I definitely recommend checking this one out.
5 Amazeballs Stars!!

Missy Johnson is a New York Times and USA Today bestselling author who lives in a small town in Victoria, Australia, with her husband and her confused pets (a dog who thinks that she is a cat, a cat who thinks he is a dog . . . you get the picture). When she’s not writing, she can usually be found looking for something to read.