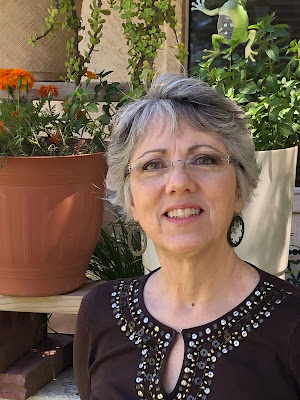 Some say Tina Peterson Scott likes to live life backwards: she got married and had her family first and just recently earned her Bachelor's Degree in University Studies with a minor in English. She does admit to being a life-long learner, but otherwise thinks she got life just right.

Tina has written numerous articles for a local newspaper and worked as a newspaper editor for a time. She was also a contributor of non-fiction articles for The Beehive, and the Desert Saints Magazine. She is currently doing her best to fill the world with quality fiction that involves sweet romance and happily-ever-afters.

Tina doesn’t usually enter contests but has won first place in the American Mothers Association for her article titled, Just Call Me Mom, and second place for her poem, A Part of Me. In the LDStorymakers’ First Chapter Contest, she won second place for her novel, Menopausal Fairy Mischief. She is also pleased that one of her children’s picture book reviews was published in the Arizona English Bulletin.

Can former high school sweethearts have a second chance at love? Phoenix property manager Millie Crump returns to her dusty hometown, the week before Christmas to prepare the local haunted hotel for sale. Her boss doesn’t know it, but her secret agenda is to keep her childhood promise to the ghost. Unfortunately, the guy who broke her heart fourteen years ago is the only one who can help with her plans.When his old crush roars into town behind the wheel of a fancy red Miata, Lonny Medina is blindsided by the city girl she’s become. Sure, he’ll help her with hotel cleanup and even dabble in some ghost-hunting, but he can’t risk his heart again. Together, they unravel clues, ward off danger, and fight to uncover the mystery of the old hotel while attempting to help the elusive ghost pass on. In doing so, Lonny and Millie discover the misconceptions that have kept them apart all these years, but both are unsure whether it will be enough to rewrite their futures into a happily ever after.

His expression was haunted and full of pain. He pulled her close, his lips drawing across her cheek until meeting hers. His kiss was passionate and demanding, and full of the pain she knew he must feel. She returned his passion, a starving woman, slaked by the man she loved.