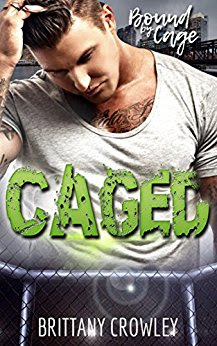 CAGED
Bound by Cage #1
Amazon: http://authl.it/72g?d
Savannah- I was perfectly content with my life, or at least I thought I was. Then Zander ‘The Hitman’ Cage walked into my bar with those hypnotizing blue eyes and everything I ever thought I wanted flew out the window. Giving him a chance was the easiest decision I ever made. He ripped apart my safe little existence and took me along for the ride of my life. He was a fighter, a hero and every woman’s fantasy.
Zander- I didn’t need any distractions coming up on the biggest fight of my career, but fate had other plans.
Savannah was a breath of fresh air and the most beautiful woman I had ever seen. I never planned on meeting her, I also don't plan on letting her go. I'll do whatever it takes to show her that I'm more than just the name, and will stop at nothing to make her mine. 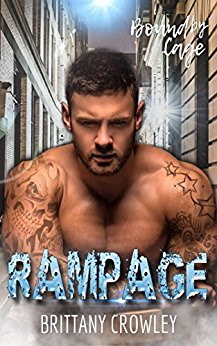 RAMPAGE
Bound by Cage #2
Amazon: http://amzn.to/2nFyvxg
Ashlyn- Pregnant and alone is never where I saw myself in life. Shit happens and you have to roll with it. He made his choice, and it kills me each time I see him living his new life. But what if things aren't really as they appear? What if I can still have a happily ever after?
Josh- You know that guy, the one that screws up his whole life over a stupid decision? Yeah, that's me. I had the girl and I blew it. Now I'm determined to salvage my fighting career and win her back. She doesn't know it yet, but I'm not taking no for an answer. 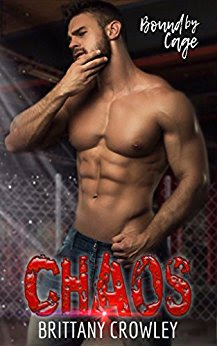 CHAOS
Bound by Cage #3
Amazon: amzn.to/2uMIxmi
Rules of Play for Bagging and Banging
1. No clingers
2. No repeats
3. No innocents
4. No complications
Should be easy right? So why the f*** am I looking at the cult babe like a starving man and she's a succulent prime rib?
Georgie's everything I've ever avoided, all wrapped up in a sexy little package that plays havoc with my di... er, boyish ways. She's innocent and clearly needs help, she's  always around and god help me, just the thought of dirtying her good girl image has Little Jay at full salute.
But I can't stay away, even when I have to run to her rescue and bring out the chaos. Guess I've been whipped like my brothers, but in my case, I make it look good.
If Jayden's going down... for the first time it'll be in the name of love.

About Brittany Crowley:
Brittany Crowley was born and raised in Massachusetts. She still lives there today with her husband and 3 kids. Getting into the world of romance after she had her first child, she was hooked. Though she had many ideas in her head, Brittany was unsure if she had what it took to become a writer. A few encouraging words and one writing challenge later, she completed her first book. Now you can find her trying to keep up with her crazy kids and writing any chance she gets.
Stalker links:
Newsletter:
http://eepurl.com/cGw1mv
Amazon:
https://www.amazon.com/Brittany-Crowley/e/B01MS694NL/ref=ntt_dp_epwbk_0
Twitter:
https://twitter.com/CrowleyBrittany
Instagram:
https://www.instagram.com/authorbrittanycrowley/
Goodreads:
https://www.goodreads.com/author/show/16221789.Brittany_Crowley
Facebook:
https://m.facebook.com/authorbrittanycrowley/

All of my books are Sports Romance focused on MMA. They are Romantic Comedies that follow a different couple every book, but it's the same world. The first one, Caged, follows Zander and Savvy through the biggest fight of his career. The second, Rampage, follows Josh and Ashlyn as he tries to get his fighting career back. It's a second chance romance as they try to figure out their relationship when Ash turns up pregnant after their one night together and his bad choices. And Chaos follows Jayden and Georgie as she tries to navigate the whole new world in front of her after escaping her horrible upbringing.
I don't plan on staying solely in the Sports Romance Genre, but I love these books something fierce.
I've had ideas in my head for the past two years but the thought of actually giving it a try was scary. After talking to one of my best friends, she convinced me to try and Caged was complete a month later. The time just felt right.
Jayden Cage in Chaos was my favorite. He's just so full of life and a big ball of inappropriateness. I thought I was going to have trouble writing him, but it just flowed so well. He's super funny.
My couch haha I don't have an office with a desk or anything. I'm usually anywhere my kids are playing off to the side with my laptop.
I actually don't, it's too distracting. I'm not one of those walk and chew gum types of people. If the TVs on or some music, I have a hard time focusing on what I'm doing.
Start writing something else. I always get writers block at the same point in every book I write. This generally always helps me. Or I take a break for a few days to get the ideas going in my head again.
Teleporting, or mind reading. Although I picture it like What Women Want and I'd hear a bunch of stuff I didn't want to.
I'm so excited for my next project. It's called The Big D. It's about a girl just going through the motions in life working 2 jobs. She meets Grant Kensington and at first has no idea who he is. Needless to say, they go on quite the journey when she finds out he's a super wealthy restauranteur and very much in the public eye. It's a RomCom and will come out some time in October.