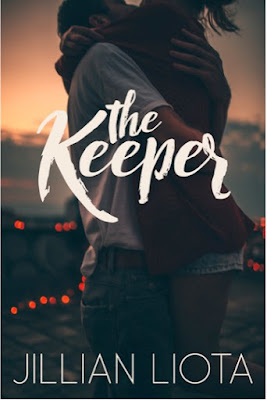 The Keeper by Jillian Liota

Soccer goalie Rachel Jameson is in her final year at Glendale College on academic and athletic scholarships. It’s quite the achievement for a young woman who grew up in a home filled with drunken abuse, who barely made it out of high school alive.

But she’s smart, dedicated, and has her eyes set on that cap and gown next spring. Nothing’s going to get in the way of a hard-fought battle for the freedom and independence she’s so desperately craved.

Until she meets Mack.

He stumbles into her world with a flirty smile and warm eyes – a man that pushes Rachel out of her comfort zone and into his arms. Their chemistry is swift and undeniable, and soon after meeting the two recognize the depth of their connection.

But an unfortunate circumstance forces the two to abandon their romance before it has truly begun. Rachel’s carefully planned life begins to shake like an unstable house of cards, and when she risks losing Mack completely, she has to decide what’s more important. 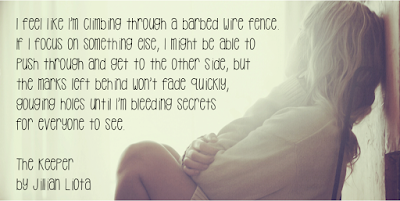 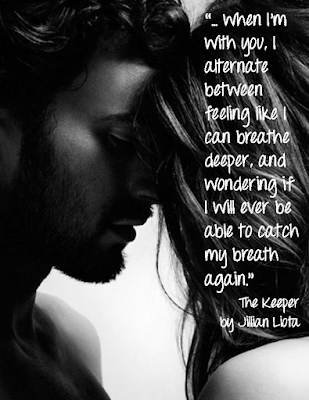 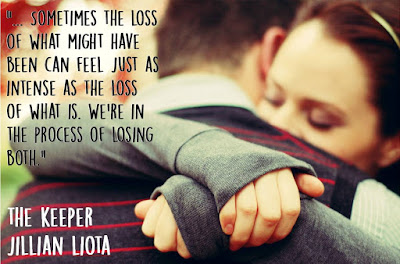 Interview With Jillian Liota:
1. Can you tell us a little about your book?Rachel is a college student who has a scholarship to play for the soccer team at Glendale College in the Los Angeles area. She has a fun roommate, a broody but caring older brother, and a few good friends on the team. She meets and feels an instant connection with Mack - but after their first amazing date, they realize they can't be in a relationship. You'll have to read up to find out why!
2. Using one sentence, can you describe The Keeper?The Keeper is a New Adult romance between Rachel and Mack, two people who are good and kind and genuine and absolutely perfect for each other - but they each have a past they are trying to move on from that keeps them from starting their relationship.

3. If your book were made into a movie, who do you picture playing Rachel and Mack?Ooooooh, that's a hard question! When I write, I usually try not to picture faces as a whole. I might imagine a certain expression and work really hard to describe it, and I'll think of certain physical traits I want the hero and heroine to have, but I never really picture entire faces in one go. I'd have to say Mack would be played by Chris Pratt. He has that self-depricating thing going on, the kind heart, the warm eyes. For Rachel, I would probably think someone like Carey Mulligan, with that ability to look at one moment so elated and so beautiful, but in the next to look so grief-stricken and worried.
4. Do you have a favorite spot to write?I almost always write on my couch while my husband watches TV. I know some authors go to coffee shops or have special rooms or need mostly quiet. But my husband is my best friend, and I often ask him questions that help inform how I might write something. So, it isn't so much that I always have to sit in one spot on the couch with my legs crossed and my laptop resting on a pillow (although that is preferable) - it's more about being near my hubs. He's my muse :)
5. Do you have a favorite food or drink you must have nearby when writing?Oh Diet Coke absolutely, with a Twix bar. I think I even put those two things in my "About the Author" section of The Keeper because they were so instrumental :)
6. Do you listen to music while you write?Typically no. I might pull up songs if I'm trying to evoke a particular mood and I just can't get into it. Or if I am using a song in a part of what I am writing, I'll listen to it while typing out the lyrics, rather than look up the lyrics online. But mostly I zone out so much when I write that listening to music wouldn't affect me at all.
7. If  you could spend 24 hours as a fictional character, who would you chose?Without even second guessing, I can immediately respond that I want to be Salome from Kulti. I just think she is the absolutely amazing, genuine, caring, deep character. I love her relationship with Kulti and how she approaches her life. Mariana Zapata wrote Sal and Kulti, and the novel Kulti, so well. It sits on my iPhone and I've re-read it at least a few times. It was actually the inspiration for why I have Mack and Rachel as soccer athletes. If I could make Mack and Rachel live in the same 'world' as Sal and Kulti, it would be AMAZING.
8. What are writing projects are you currently working on?
Currently I am working on Keep Away, which will be a sister-novella to The Keeper, and will be      about Charlie and Jeremy (characters from The Keeper). Keep Away should release for free sometime in February or March 2017. Apart from that, I am working on a new book tentatively titled Life in Boxes - and it's about a man with very strict rules about his life, and a woman who explodes into his world and shakes things up. No guesstimate on that release, though, since I haven't even started writing it yet.
Posted by Gia Guido at 9:00 AM