Release Blitz for The Summer That Melted Everything by Tiffany McDaniel 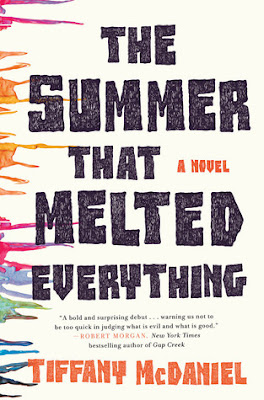 Synopsis:
Fielding Bliss has never forgotten the summer of 1984: the year a heat wave scorched Breathed, Ohio. The year he became friends with the devil. Sal seems to appear out of nowhere - a bruised and tattered thirteen-year-old boy claiming to be the devil himself answering an invitation. Fielding Bliss, the son of a local prosecutor, brings him home where he's welcomed into the Bliss family, assuming he's a runaway from a nearby farm town. When word spreads that the devil has come to Breathed, not everyone is happy to welcome this self-proclaimed fallen angel. Murmurs follow him and tensions rise, along with the temperatures as an unbearable heat wave rolls into town right along with him. As strange accidents start to occur, riled by the feverish heat, some in the town start to believe that Sal is exactly who he claims to be. While the Bliss family wrestles with their own personal demons, a fanatic drives the town to the brink of a catastrophe that will change this sleepy Ohio backwater forever.
Book Trailer:
https://www.youtube.com/watch?v=uLV9AEHvORA
Goodreads:
https://www.goodreads.com/book/show/26114523-the-summer-that-melted-everything

Review by Gia:
With this one the blurb sounded interesting.   It's not my typical type of read.  I usually like my books to have a little romance but occasionally I need a break and need to read something a little different.  I am really glad I picked The Summer That Melted Everything to read.  I have read a lot of book but I haven't read anything like this one before.  It's an interesting and intriguing story.
In 1984 it's super hot in the town of Breathed and Fielding's Dad invites the devil to their town.   A thirteen year old boy named Sal shows up.  He says he's the devil.   Things happen throughout the summer that has people believing Sal is the devil.   Are the accidents around town just accidents or have they been caused by the devil himself?    Fielding and his whole family are pretty interesting and throw Sal into the mix and I didn't want to put the book down.   It's one of those reads that is thought provoking and leaves you thinking about it even after you put it down.
5 Amazeballs Stars!!

About the Author:
An Ohio native, Tiffany McDaniel's writing is inspired by the rolling hills and buckeye woods of the land she knows. She is also a poet, playwright, screenwriter, and artist. The Summer that Melted Everything is her debut novel.
Website:
http://www.tiffanymcdaniel.com